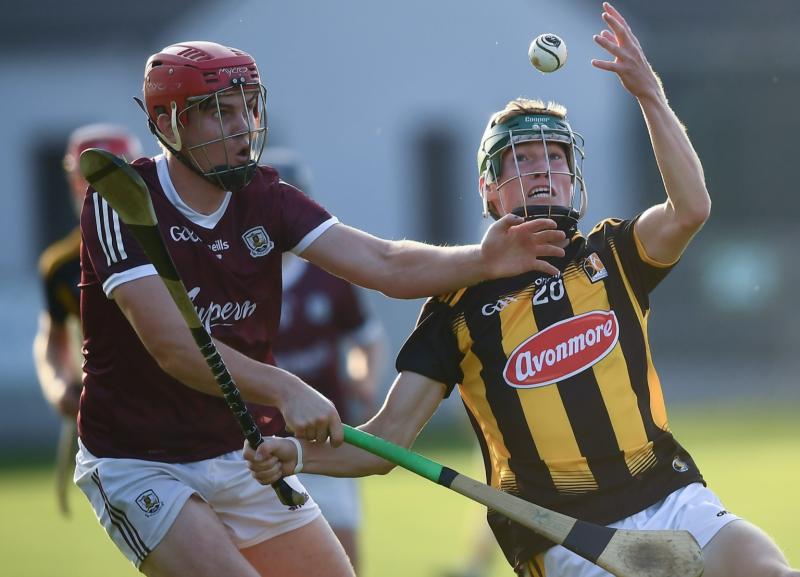 Ian Byrne of Kilkenny grabs the ball ahead of Galway's Sean Neary in tonights Leinster under 20 semi-final. Pic: David Fitzgerald/Sportsfile

Kilkenny's Leinster Under 20 championship campaign came to an end in Tullamore this evening when a slick Galway side ran out five point winners in red hot conditions.

It was very much a game of two halves and it was Galway's destructive opening period that won the game as they led 1-13 to 0-3 at the interval with the Connacht side's forward line running riot and in particular Donal O'Shea who rattled in the goal past Aidan Tallis in the 19th minute.

The only Kilkenny points came courtesy of Eoin Guilfoyle, Conor Kelly and Peter McDonald and Derek Lyng's side had an everest like mountain to climb in the second half but to their credit they began to reel the Galway lead in with the help of the breeze at their backs.

Guilfoyle led the Cats scoring with seven points in total and it was his penalty attempt that rebounded for Tomas Dunne to score that gave the Cats huge hope.

Kilkenny got the margin back to four points heading into stoppage time but after Guilfoyle went for goal and had a shot saved the game was up for the Noresiders and Galway sub Conor Flaherty knocked over an insurance score to set up a final date with Dublin next week.