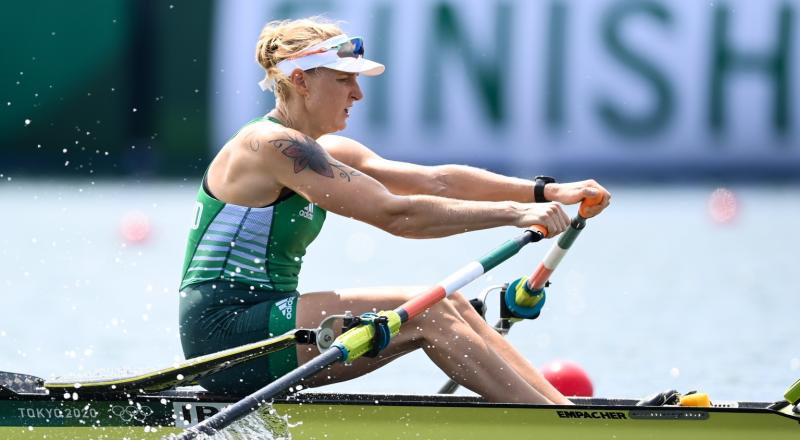 Sanita Pušpure of Ireland during her heat of the women's single sculls at the Sea Forest Waterway during the 2020 Tokyo Summer Olympic Games in Tokyo, Japan. Photo by Stephen McCarthy/Sportsfile

Today was the opening day of action in Tokyo for Team Ireland athletes, with all attention firmly focused on rowing as Sanita Puspure in the Women’s Single (W1X) and Philp Doyle and Ronan Byrne in the Men’s Double (M2X) took to the water early on.

Puspure demonstrated her class by cruising home first in her heat in a time of 7:46.08, almost eight seconds ahead of second-placed Kenia Lechuga of Mexico and progressing straight through to the quarter finals. In the men’s event meanwhile, with only the top three moving to the semi-finals, Doyle and Byrne finished just outside automatic qualifying in fourth place in a time of 6:14.40 and will now compete in the repechage tomorrow (Saturday) morning.

Puspure led from the start, and was never under pressure throughout the race. However, the competition is proving extremely high in this event, with the fastest heat times being posted in heat six by Emma Twigg (New Zealand) and Anna Souwer (Netherlands). Timings on the course may hold little relevance though, with conditions ever changeable.

Speaking after her race, Puspure was relieved to get her Tokyo 2020 Olympic campaign underway: “That’s the first race done, I’m focusing on the next one now and taking it one race at a time. I’m not thinking too far ahead, and am staying calm and collected. The conditions were okay, it swings around a lot. For our race, we had a cross head, and you can see by the flags here it is a tailwind so it changes rapidly. You just have to go with it.”

Elsewhere in swimming, Shane Ryan will not start in the Men’s 100M Backstroke. His decision to withdraw is based on persistent shoulder pain that he has been experiencing, which is specific to this particular stroke. The decision was made in consultation with the Team Ireland swimming and medical staff in Tokyo. He will, however, still compete in the Men’s 100M Butterfly and the Men’s 4x200M Freestyle Relay.

The official Opening Ceremony of the 2020 Tokyo Olympic Games will take place later this evening Tokyo time (12pm noon Irish time), while Day One tomorrow (Saturday, July 24th) is an action-packed day for Irish athletes with a host of rowers in action and the men’s road race in cycling. Gymnast Rhys McClenaghan will also get his first taste of action in the morning, while Kurt Walker will be first up in the boxing ring for Ireland. Jack Woolley will begin his Olympic campaign in Taekwondo, swimmers Ellen Walshe and Darragh Greene will hit the water in the evening, while the Irish hockey team faces South Africa in their first pool match.