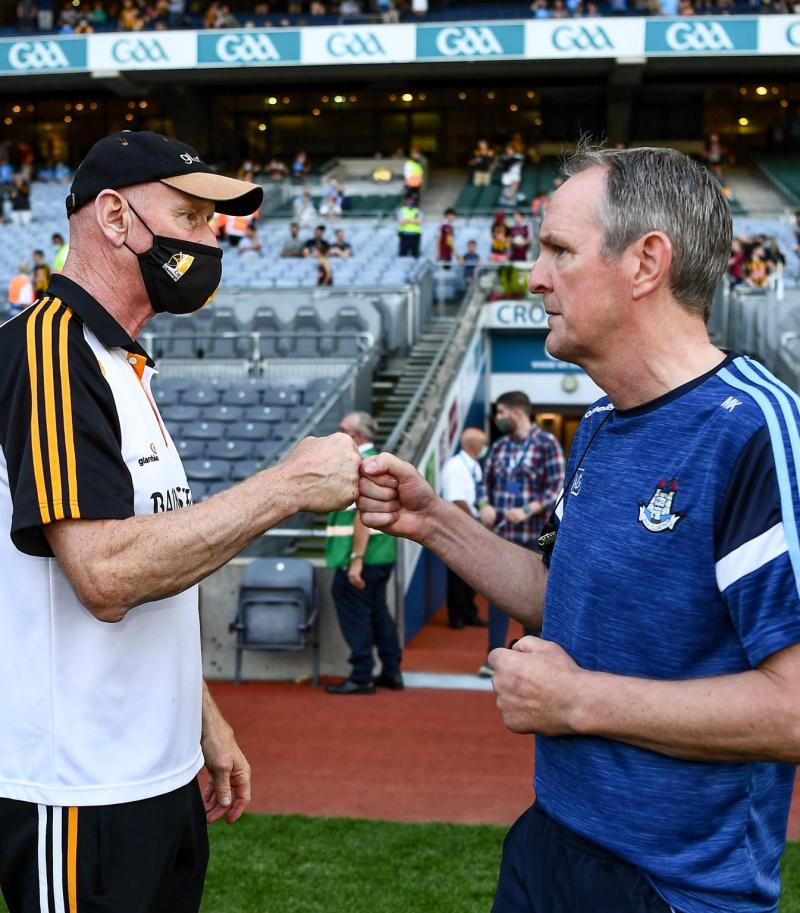 Kilkenny are exactly where they will have wanted to be at the start of 2021.

Another Leinster crown safely in the bag with a place in the All-Ireland final at stake in a few weeks time.

The chance to right the wrongs of the Waterford defeat last November and show the country what they are made of.

For now though they get to revel in more provincial glory after defeating Dublin 1-25 to 0-19 in Croke Park on Saturday night and for manager Brian Cody, it was nice to get their hands on silverware.

“It’s another win. That was what we wanted to achieve. It was a huge battle. It took us a long, long time to get into a position to get even a small bit comfortable. We were never comfortably, really. A huge, strong challenge from Dublin definitely. Our lads kept working and tapping points at important times and eventually we got there.

“We got the first few points, TJ got a wonderful point to start it off, but Dublin just came back into the game as they bound to do. They worked their way into the game. It was a fierce battle for the majority of the game. The work-rate was strong through all the field and it had to be,” he said.

The Leinster title is a great accolade to achieve for the Cats and even more so when it’s two years on the trot but with so many big teams falling by the wayside in provincial action, the prize of an All-Ireland semi-final place is cherished even more.

“We’re delighted to be Leinster champions first of all and we’re delighted it gets us into an All-Ireland semi-final. Three weeks to go, there are going to be some very good games in the meantime and we find out what the opposition is going to be. You’re talking about a step up in everything from now on because what comes out to play against us in an All-Ireland semi-final is going to be a huge challenge. But look that’s where we want to be and we’re there now.”

As against Wexford, the strength in depth in the Kilkenny panel really came to the fore with six points in total scored from the subs and that impact is something that really pleased Cody.

“We have a very strong panel and the players that came in did very well and it’s going to open the competition for places in training over the next few weeks. The competition is going to be serious.”

The main takeaway from Saturday’s game won’t be anything to do with the hurling unfortunately after four of the Dublin players were ruled out under Covid complications and for Dublin boss Matty Kenny it was a major blow to his plans.

“I think Croke Park made themselves very, very clear that these games had to go ahead,” said Kenny. “It wasn’t even something we considered.

“It was disappointing coming this morning (Saturday).

“If it was something that happened earlier in the week, we could maybe deal with it more.

“We talked to the squad through a text and put it at the back of our minds.

“This Delta variant is hitting that 15 to 30-year-old age group.

“I think for all club and counties teams, we’re in more danger than we were anytime in the last 18 months because this (variant) is so widespread in that younger population and nobody is vaccinated in that population.

“So look, I think we’ve all got to just double down and we have been doing that because all inter-county teams are kind of operating in their own bubble.

“This came a little bit out of left-field on us in the last few days.

“We had them close contacts (notified) this morning.

“We understand the importance and seriousness of it. So we’ve just got to go back and double down on our own protocols.

“It cost us today but we’ve got to make sure that it’s not an issue for us in two weeks’ time.”

That next day for Dublin is in the All-Ireland quarter-final on Saturday week where they will hope to have all four players available and Kilkenny themselves will be sweating on the fitness of James Stephens man Conor Browne after he limped off with an injury in the opening half.