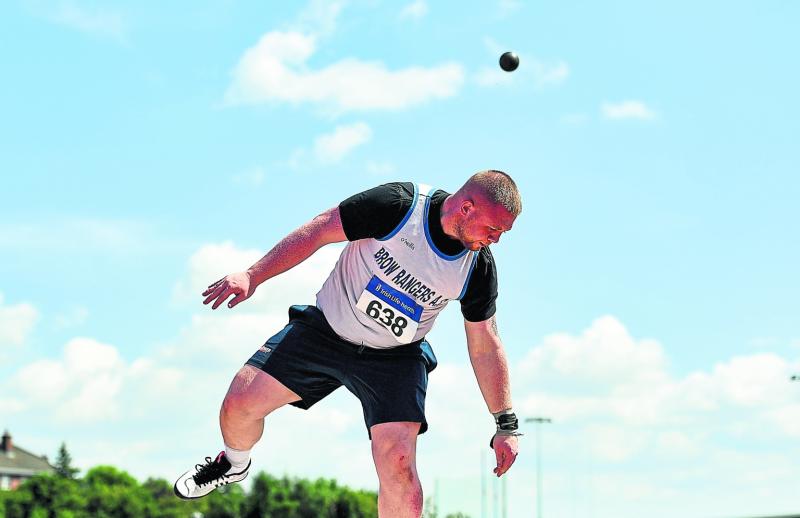 It was a busy weekend on the athletics scene as the final action in the Leinster Juvenile Track and Field championships was quickly followed by the Athletics Ireland Summer Games.

It was back to Carlow IT for the final day of the Leinster Juvenile Track and Field Championships.

On what was another scorching day the track, which has been home to the juvenile athletes for the last three weekends, saw Kilkenny athletes quench their thirst for competitive athletics.

The county took home nine gold, five silver and seven bronze medals. There were many more fourth place finishes which, in normal times, would also qualify an athlete for Nationals. It is important for these athletes not to lose heart, a fourth place finisher today could be the Olympian of tomorrow.

It was the turn of the younger age 800m and the older age steeplechase on Saturday. The numbers competing in the 800m were significantly large, forcing heats and finals.

This can be tough for athletes age 11 to 15. It is hard to just run fast enough to qualify for the final and then turn around a few hours later to do it all over again, running even faster than before.

Sometimes the heat winners have just given too much and the legs don’t move the same in the final. There are those athletes, of course, who seem to know who to judge pace in the heats, turning up the speed significantly for the finals.

Taking on an 800m heat and final a few hours apart is a big ask for young athletes, especially on a scorching hot day. All those reaching the final should consider it a great honour, even if they did not medal.

Langton won the faster of the two heats, the pace set by Louth duo Grainne Moran (Dundalk) and Eimear Cooney (Ace). With four automatic qualifying spots, Langton had no choice but to go with the pace – the alternative was to run at her ease and risk not qualifying.

In heat 2, the two St Senan’s girls Eve Dunphy and Charlotte Carpendale sat behind the long time leader Wicklow’s Maria Zacharenko. Content to let Zacharenko do the hard work, the St Senan’s girls moved ahead of her with 100m to go, finishing first and second. The final was shaping up very well.

A group of six girls including Pia Langton (KCH) and Eve Dunphy (St Senan’s) formed a leading group after 300m in the final. Moran of Dundalk led the group, followed by Zacharenko.

Back in third Langton looked very much at ease. With 200m to go Langton made her move and drove on for home. In the end she was an impressive winner with two seconds clear of the second athlete and just one second short of the Leinster record set by Fiona Dillon of Thomastown in 2018.

The tall Kilkenny girl looks a promising prospect for the All Irelands in August.

Joss O’Connor (St Joseph’s) was somewhat disappointed with his 1,500m run the previous week. However, on Saturday he was determined to avenge any disappointment and ran his heart out to hold onto third place in the boys’ under-14 800m. Clodagh O’Callaghan managed to do the same in the girls’ under-14 event.

The triple jump produced three wins for the county. Evan O’Toole (St Joseph’s) has been making the triple jump his own. Going from strength to strength over the last three years, he has jumped close to 13m on occasions. On Saturday he was crowned Leinster champion for the third year in a row.

Keelin Roche (St Senan’s) is new to the event this year and is already showing signs of promise. He took the gold. Similarly, Abbie O’Brien (KCH) proved her worth in the girls’ under-17 triple jump when she too claimed the gold medal with club-mate Orla Kenny runner up.

Clodagh Monahan (St Senan’s) and Tara Maguire (KCH) won the under-19 and under-18 400m hurdles respectively. With Thomas Barr being an Irish hope in the 400m hurdles in the Olympics, these girls have a great role model.

The steeplechase is very much an overlooked event. While plenty of athletes line up for the 1,500m and 3,000m events year after year few turn to the steeplechase, which is often under represented.

Internationally, Ireland does well in this event. It is perhaps time that more is done to promote the steeplechase among middle distance juveniles.

While access to the water jump might be more challenging, most clubs have hurdles and these can be used for steeplechase training. Kilkenny has traditionally been represented in this event. In most recent years the county has had national medal winners in Aoife Allen (St Senan’s), Cathal O’Reilly (Castlecomer) and Kevin Burns (KCH), to name but a few.

It was good to see two athletes from the county participate this year and take home two gold medals.

Although only 18 Cathal O’Reilly is almost a veteran of steeplechase jumping. Having won the under-17 national title while competing for Castlecomer, now with KCH he won another Leinster steeplechase title on Saturday, with hopefully an All-Ireland one to match.

Billy Coogan (Gowran) won his first Leinster individual track medal. He took the boys’ under-17 steeplechase title with over 20 seconds to spare from Carlow’s Mackenzie McIvor. It was great to see a good field in this event too – all good cross-country runners too.

Eli Dunne carried the throwing flag for Brow Rangers as he took the Leinster gold in the under-16 boys’ hammer. It is good to see an increased participation at county level in the hammer with more clubs offering training in this event. Access to the cage can often be problematic for clubs, especially with all the Covid rules in places these days.

Kilkenny’s Eileen O’Keeffe finished sixth in the World Championships in Japan in 2007. A Kilkennywoman at the top of her game, she is often quoted as saying her training ground was a home-made hammer circle in her father’s field. No cage, nothing but the fresh green grass surrounded this circle. Eileen represented Ireland at two Olympic Games.

The short track season has created an appetite from more racing. With the Olympic Games moved to 2021 and the qualifying closing dates being set for June, the National Junior and Senior Track and Field was held in mid-June.

With the Leinster Juveniles on Saturday in Carlow, this paved the way for the AAI games to be held at the same destination on Sunday.

There were some noteworthy performances. Shane Power (St Joseph’s) produced another fine win in the Pole Vault. It may not have been the 4.56 he produced to claim the Leinster Senior Pole Vault record a few weeks ago, but the 4.40m win was nothing to be balked at. Shane is by now a well-respected pole vaulter and can only look to the likes of Armande Duplantis of Sweden as he aspires to take the Olympic title in a few weeks’ time.

Eoin Everard (KCH) may have been relegated to the silver medal position in the 1,500m but it was to a very talented runner in the form of European under-20 1,500m champion Cian McPhillips of Longford AC.

McPhillips set a new national u20 record in a time of 3.40 as he moved ahead of Everard in the last 250m.