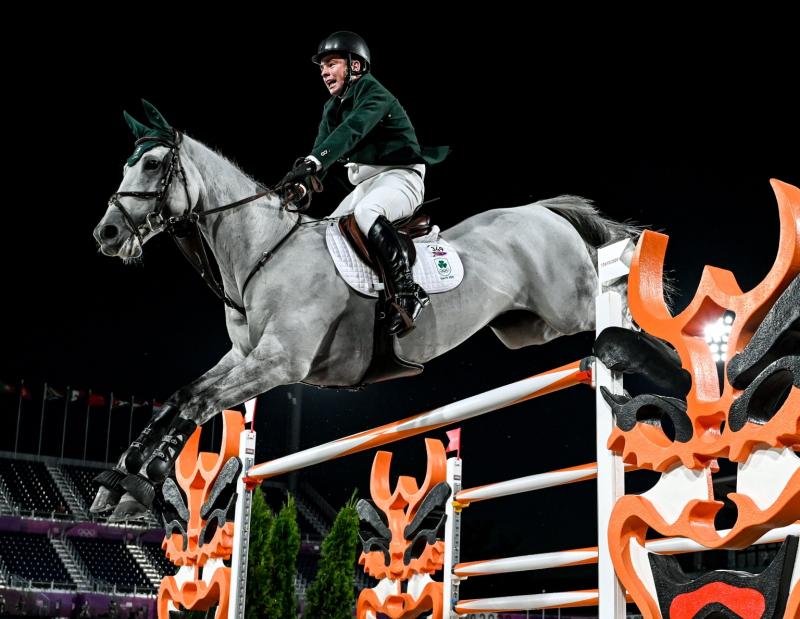 Cian O'Connor of Ireland riding Kilkenny during the jumping individual final at the Equestrian Park during the 2020 Tokyo Summer Olympic Games in Tokyo, Japan.

It was a jam-packed evening of show jumping for Team Ireland yesterday, as all three individual athletes were in action in the Individual Show Jumping Final.

Sixth into the ring and first to go of the trio was Cian O’Connor and Kilkenny (ISH). The pair displayed incredible poise around the difficult track and jumped with ease. Giving plenty of height to every fence resulted in a fantastic clear round, unfortunately, the time was against them as they stopped the clock on 88.45, a fraction over the time allowed of 88 seconds.

This one time fault kept them out of the eventual Top 6 clear rounds that advanced to the jump-off to fight for a podium position. The pair finished the Individual Finals in 7th place, an incredible feat for the young nine-year-old horse.

“I couldn’t be happier with him,” said O’Connor. “To finish seventh at the Olympic Games for such a young and inexperienced horse, I’m very happy.”

Speaking afterwards Team Ireland Veterinarian, Marcus Swail said, “Kilkenny recovered quickly, and all vitals were normal. He was subject to further examination at the on-site veterinary clinic and the horse is now comfortable and back in his stable.”

O’Connor subsequently made the decision to withdraw from the team competition this weekend, “I’ve decided not to put Kilkenny forward for the team competition as his well-being comes first. I have no doubt we will have much success together in the future.” Shane Sweetnam with Alejandro will now compete in the team event.

Following on later in the competition and next to go for the Irish was Bertram Allen and Pacino Amiro (ISH). The pair started off their  display strong, but unfortunately were caught out by the difficult combination, which caused a few riders problems throughout the night.

“I was getting there a bit close. I tried to get him back to me,” explained Allen after. “He’s a big horse, maybe not just as rideable as he needs to be - but that comes with the territory of being only a nine-year-old.”

Allen and Pacino Amiro (ISH) picked up another four faults for another pole on the floor later on in the course, leaving the pair on a total of 8 faults in a time of 84.64, good enough for 15th place.

The last rider to go for Ireland was Darragh Kenny and VDL Cartello. Having plenty of time to watch as the course rode, Kenny knew what he needed to achieve from his round. Unfortunately, a very light rub coming out of the first double cost them their first four faults.

Kenny knew that by having this pole down he would need to move up his pace to be in with a chance of a higher placing. This gamble did not pay off though as the pair ran on after the open water fence and brushed off the following vertical. Kenny and VDL Cartello finished on a score of eight faults in a time of 85.11, which was good enough for 17th place overall.

Speaking after, Kenny commented: “I thought my horse jumped well, it was a very tough course. I made a little mistake coming out of the double and I paid for it. Then, I was trying to be a quick four-faulter and I had one more down with the horse. The horse jumped really well, I just needed to ride it a little bit better today….He feels good after that round. We’ll just freshen him up a little bit now for Friday and Saturday.”

The show jumping athletes have a rest day today before the start of the Team Qualifier on Friday. The second horse inspection will take place today at 9am Irish time.