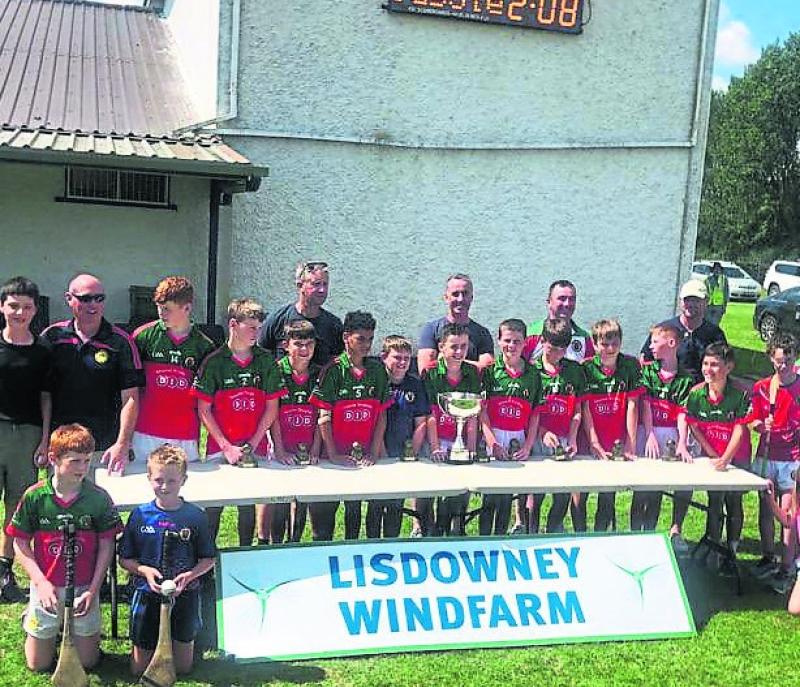 The 39th edition of the Lisdowney Sevens sponsored by Lisdowney Windfarm took place over the weekend of July 24 and 25.

The tournament was reduced to 16 teams from the North of the county due to Covid restrictions. While the reduced number of teams shortened the playing days from three to two there was no reduction in standard of play or excitement from previous years.

On Saturday first round wins for Dicksboro, Young Irelands, Erin’s Own, Lisdowney, O’Loughlin Gaels, Danesfort, James Stephens and Graigue-Ballycallan led to a place in the quarter finals of the Sweeney Cup. The eight remaining first round losers went on to compete for the Kilkenny Supporters Club Shield.

Quarter-final wins for Dicksboro over Young Irelands, Erin’s Own over hosts Lisdowney and James Stephens over Graigue Ballycallan secured semi-final places on Sunday.

Danesfort and O’Loughlin’s played out a pulsating tie with the width of a crossbar from an injury time penalty denying Danesfort a victory over the city side.

And so, to finals day on Sunday and there was to be no let-up in the drama with the temperatures again in the mid-20s.

Erin’s Own edged a tight semi-final with Dicksboro while James Stephens accounted for O Loughlin’s to qualify for the final.

In the shield Tullaroan whose management included former player of the tournament winner Donny Hogan eventually saw off Bennettsbridge in an entertaining semi-final by a solitary point while Barrow Rangers had four points to spare over St Lachtains.

In the final which was arguably the game of the tournament three second half goals from Tullaroan saw them come back from the dead to defeat a quality Barrow Rangers side.

Barrow Rangers can count themselves unlucky not to come away with at least the chance of extra time however great credit to both sides for the standard of play and effort in the conditions.

The final of the Sweeney Cup was again a tight affair with another former player of the tournament David Buggy on the sidelines for Erin’s Own.

While Erin’s Own started quickly to take an early lead, the Village eventually got on top to lead 1-4 to 1-3 at half-time.

Although there was little between the teams in the second half the Village’s ability to get scores saw them victorious in the end with a score of 2-8 to 1-4 which saw them tie with Ballyhale Shamrocks with seven tournament wins.

Larry Phelan of James Stephens was awarded player of the tournament to join the list of previous winners which includes Henry Shefflin, James Fitzpatrick, Richie Hogan and Conor Fogarty.

Special thanks to the organising and catering committees, referees Eamon Mansfield, Eoin Behan and Gay Rafter and to all who helped with the running of the tournament which hosted 22 games in total over the weekend.

Bord na nÓg chairperson Ger Murphy also paid tribute to the many community volunteers who helped in the weeks leading up to the tournament.

We look forward to the 40th tournament next year in the hope that the competition can get back to the full complement of teams.