Athletics- Memories of a Kilkenny Olympian 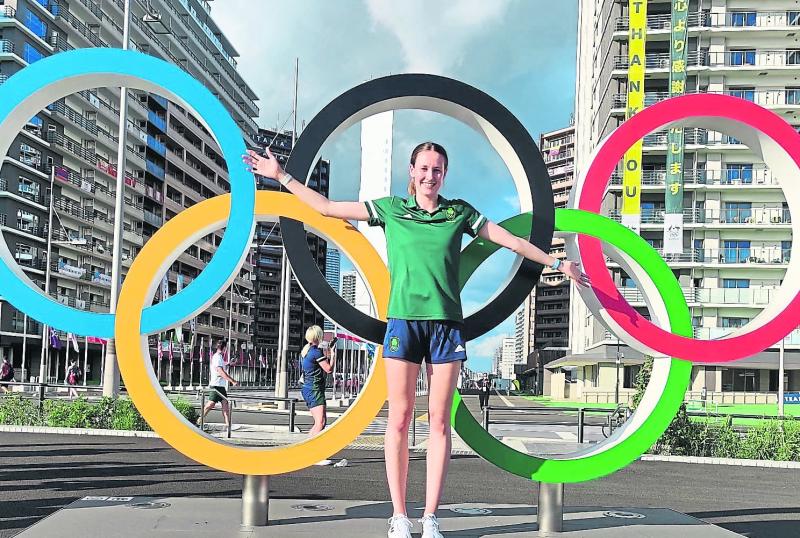 For athletes like Cliodhna Manning, getting to the Olympics represents the realisation of a lifetime’s dream. Being an Olympian is something special, an achievement on an unbelievable journey

Even if you are not much of a sports fanatic, there’s something that draws you towards the Olympics.

Every four years, our bodies adjust to living virtually in different time zones, we feel considerably more patriotic and become experts in sports we had never before considered engaging with.

For many young sports people across the nation and indeed across the county, getting to the Olympics is a dream.

Kilkenny’s connection with the Olympics was strengthened with the inclusion of Cliodhna Manning on Team Ireland. Cliodhna was selected as part of the mixed relay squad, a new addition to the Olympics.

Tokyo will mark another milestone – the first games to be held amid a global pandemic with virtually no spectators. This year the largest team ever takes part in Tokyo with 116 athletes across 19 sports, the highest ever range of sports and the most equal gender divide ever. Back in the 1932 Los Angeles Olympics Ireland fielded a small team of eight – all men.

Being an Olympian is something that is special, and is something an athlete rightfully achieves on an unbelievable journey.

The actual games begin for most with the training camp. Ireland’s relatively mild climate require its Olympians for the most part to acclimatise. Currently Ireland has its base in Fukuroi city. Like all training camp locations, the locals feel honoured to host an Olympic nation. Training continues as normal – the same rituals, the same patterns, best to keep everything as it was in Ireland. The only thing that changes is the weather – generally its hotter.

After that, it’s on to the Olympic Village where everything from the accreditation process to the food halls, the village track and transport have to be navigated. The village is like a little world on a planet of its own, an enclave of fit people protected from the outside world by high walls and security.

It’s hard to get used to the idea that everyone in the village has achieved the same thing and are all at the games for the one reason. You could be sitting in a restaurant eating dinner and the most famous basketballer ever Michael Jordan may be on the next table asking if you would not mind passing the salt shaker. Or Michael Phelps is towering over you as you struggle to take a bottle of water from the top shelf and easily reaches for it and hands it to you with a smile.

Sometimes you have to pinch yourself and remind yourself that this is real. A 7am training session before the sun’s heat intensifies kicks you into reality. A hop, skip and jump to the track makes a pleasant change from an hour’s bus or car ride.

Everything is at your fingertips.

On with the training shoes, off with the sweats and the warm up starts. You know the session for the morning, your coach is on his way and you get on with the warm up. As Carl Lewis and the American relay team practice baton changes on that same track or Fermin Catcho finishes his 10th 400m rep, it is hard to keep focused on your own event.

Maybe it’s the first Olympics or maybe it’s that you need more time to settle in the village after the training camp. Or maybe it’s just pure awe of these athletes that have been the greatest in the world for so long. On the way back to the Irish accommodation quarters Fermin Catcho says hello and Michael Jordan gives you a high-five and tells you for the 10th time that day that he is part Irish. I guess even the famous notice the not so famous too. We are all the same really. 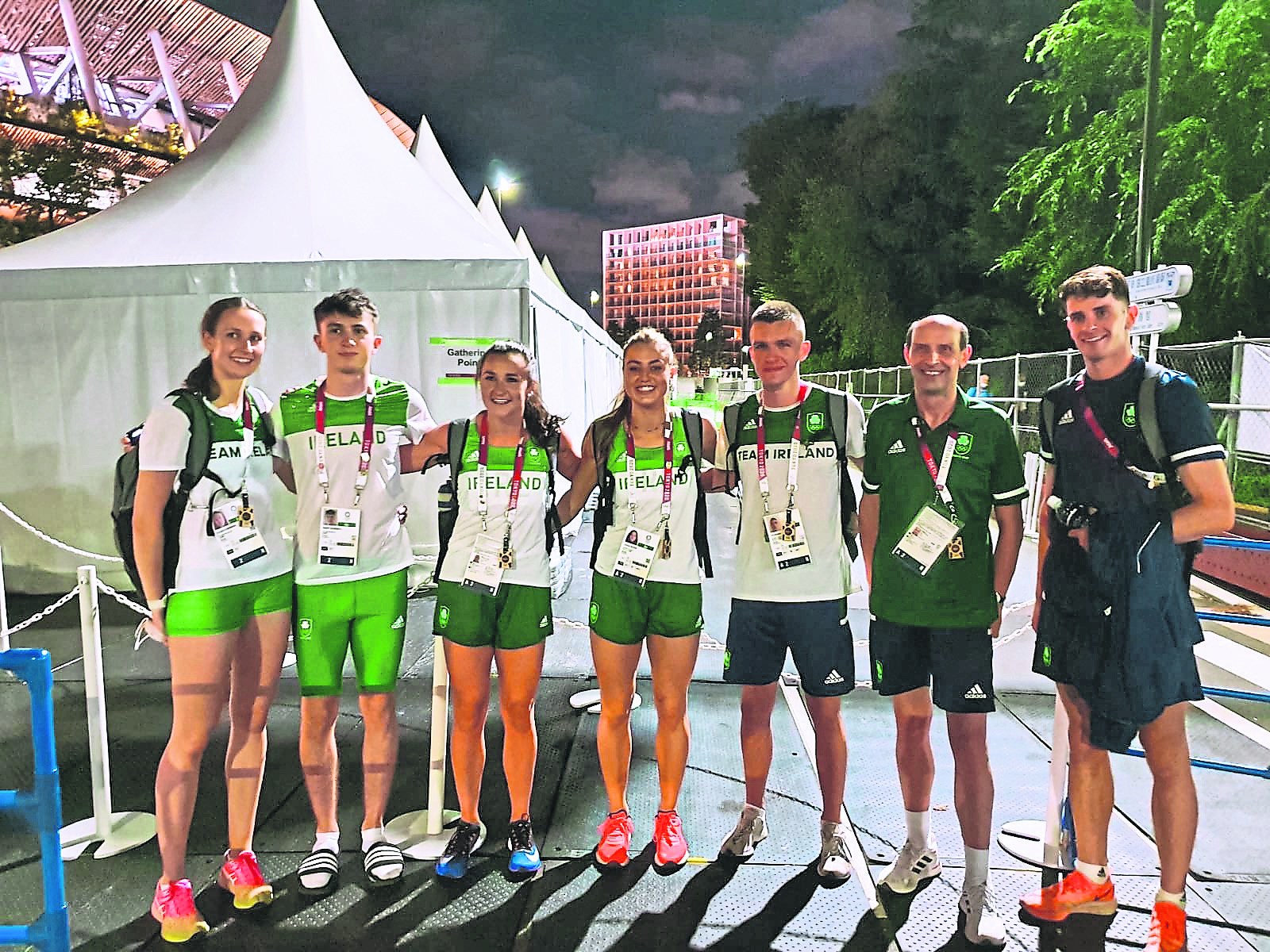 As mandated by the Olympic Charter, the proceedings combine the formal and ceremonial opening of the Olympic Games, including welcoming speeches, hoisting of the flags and the parade of athletes, with an artistic spectacle to showcase the host nation’s culture and history.

The world watches on as each nation is introduced, alphabetically in the host nations language. Ireland is somewhere in the middle, with Iceland, India and Iraq.

Those that come to support you, who are lucky enough to get tickets to see the world’s largest viewed cultural event.

The roars are deafening. Somehow you always manage to hear that Irish accent in a stadium of 100,000 people. It filters through to your ears somehow. Once the crowded stadium floor is filled with all of the Olympians, the real cultural event begins.

The Olympian is part of this living show.

Each year it is different. Each show takes on its host city’s cultural appearance.

As Greek mezzo-soprano Agnes Baltsa sings Romiossinim the Olympic flag is taken around the stadium. Alfredo Kraus sings the Olympic Hymn in his native language as the Olympic flag is hoisted. The music begins. Montserrat Cabalie’s soprano voice bellows out Barcelona as a travelogue of the city is displayed on the screen. Placido Domingo joins in the refrain. A tarpaulin is hoisted over the Olympians, all encouraged to keep it afloat. It bears the Olympic rings and has been carefully orchestrated to fit together and cover the entire floor. Another musical anthem and then it is swept away. The camera’s swoop down on the Olympians, smiling faces, gathered in their nations groups.

The Olympic flame cauldron is lit by a flaming arrow. The cauldron is alight. It will burn for the entire duration of the games. The greatest cultural show on earth ends and the athletes all return to the village.

The order of events is pretty much the same for each Olympics – swimming kicks the show off in the first week followed by track and field six days later. The rest of the sports are slotted around these two big individual spectacles.

As an athlete, you can watch all sports live. Your Olympic accreditation gives you access to everything, although it’s mostly the Irish events that you choose to watch. The team all come together to support each other – as if they had known each other for years. You exhault in each other’s victories, feel each other’s pain and share those cherished moments knowing your own as yet to come.

Each of these experiences helps you as a participant to understand the experience, prepare you for your event and feel the bond that is important as part of an Olympic team.

Of course there are those other events you discover, after high-fiving with the likes of Michael Jordan or a chance encounter with a Mongolian wrestler, you could finds yourself in the stadium watching the American dream team fight off the challenges of Angola before watching your first ever wrestling contest.

Inside you are on fire – with fear and determination. Three or four years of preparation all boil down to this moment in time.
Internally you have prepared. You are the best you can be. The rub down from the physio the night before leaves your legs lactic free and fresh, but they are tired. You had a good night’s sleep, yet you feel sleepy. You had your usual breakfast but your tummy feels upset. You are looking forward to the moment, yet you fear it. You talk but cannot remember the conversation. Your mind is constantly going over and over your routines. The last week on the track, the recovery, your coach’s words, your own mantras. They are swirling around your head.

It’s all nerves. It is typical race day nerves times 10. The warm up is the same as other races. You enter the warm up area in your Ireland tracksuit, but ditch it as soon as you can in favour of the team T-shirt and leggings - after all it is 35 degrees out there. Meet a friend from Australia and warm up together. Joined by another from Finland. And another from Great Britain. We are all one big family really – meeting regularly across Europe that summer and the one before and the one before that.

Then you want to be alone. No problem; athletes drop in and out of each other’s warm up. We all understand each other. Your mind is blank, relaxed focused just on the warm up. Taking on water, more water and more water. Just sips mind you. Then the toilet stop. Last time before the race. Got to get the tummy feeling right too. One final set of strides then some stretching.

Totally relaxed. You are ready. The event is called – you head to the start line.

It is only a race after all. You have done it many times before just not in front of that big audience. The audience you neither see or hear. Tokyo and its lack of audience does not matter really. You race - crowds or no crowds. You focus on the person in front of you and stay with them or pass them out and focus on the next person. Never let your pace be swayed by another. You have practised your routine over and over again and you know your pace, your rhythm.

Before too long the race draws to a close. As you enter that stadium for the last lap, suddenly you hear those crowds for the first time. It’s so strange – you actually hear those Irish voices, your own name. It is then that you feel the spirit of the Olympics.

That’s the moment when you know why you are here and what is all means. It is that final moment that is missing from Tokyo. The final roar of the crowds that applaud you no matter where you finish. Tokyo will find its own moment of realisation for each of its athletes just as we have all found ours.

In the end we are all a generation of Olympians and can be proud of what we have achieved and experienced.