‘The players are down, but we’ll be back’- Kilkenny Camogie Manager Brian Dowling 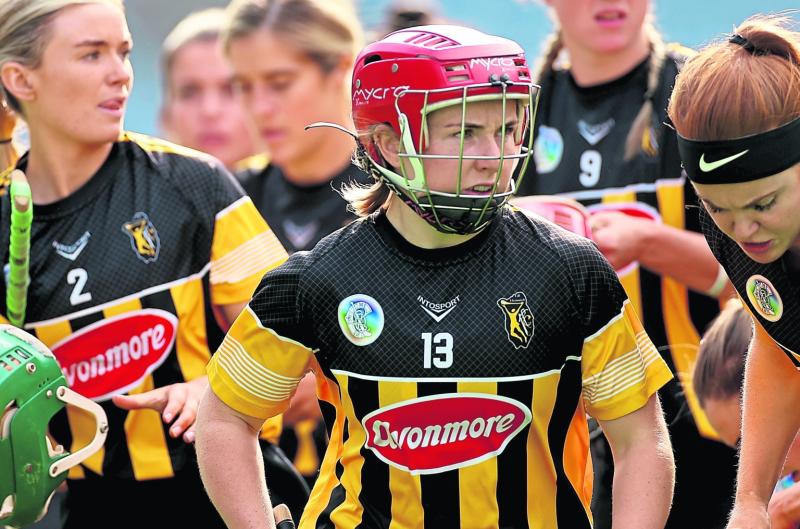 Katie Nolan and her team-mates get ready for the start of the game Picture: James Crombie/INPHO

The sting of defeat was still present when manager Brian Dowling spoke in the aftermath of Sunday’s All-Ireland semi-final, but there was also an air of optimism for the future.

“I’ve no fear these girls will be back,” he said. “They’ve given Kilkenny a lot of joy over the last number of years. I’ve no doubt they’ll be back.

“Any time you lose up here it’s heartbreaking but especially in an All-Ireland semi-final by a last minute point,” he said after the Croke Park showdown with Cork. “We wanted to get back to the All-Ireland and unfortunately we just came up short so we’re extremely disappointed.”

While Linda Collins’ last-gasp point proved to be the winner, Cork’s ability to open a sizable lead in the first half meant the Cats were chasing the game for long spells. Much of their downfall could be traced to those opening 30 minutes.

“The first half was a bit disappointing,” the manager said. “I asked the girls for more energy and they brought that to Cork. In fairness to these girls over the last number of years, they’ve died with their boots on for Kilkenny camogie.

“I can’t ask for any more of them since I’ve been involved with them and unfortunately there are just days like this when you come up a little bit short. We’re just going to have to lick our wounds now.”

Kilkenny had been second best in the first half, so knew they had to raise their game on the restart.

“I just felt our forwards just weren’t working hard enough in the first half,” he said. “We build our whole team on work ethic and we just weren’t doing that. I think we started to win the rucks and the breaks more in the second half.

“We just started taking them on a bit more and we were a bit more direct with the ball and we were getting more joy out of that,” Dowling added. “We got a great goal and we even pushed on to go a bit up but we probably needed to go three points up. Unfortunately that didn’t happen today.”

It was a desperately disappointing day for the Cats, but Dowling was full of praise for a side who have given their all, not just this year but for many seasons.

“These girls have been there for the last 10 National finals, five All-Irelands and five League finals,” he said. “The consistency they’ve shown is just unbelievable and the hunger to keep coming back.

“It wasn’t easy for these girls to lose three All-Irelands; it would have been easy to pack it in and retire but players like Collette Dormer, Denise Gaule and Katie Power - what she’s gone through to get on the pitch is unbelievable.

“Kellyann Doyle was only passed fit last night,” he added. “How she was able to play that match I’ll never know. She couldn’t raise her arm on Friday evening. I can’t speak highly enough of these girls - they’d die for the Kilkenny jersey.”

And Dowling is convinced that the Cats can bounce back.

“There’s a lot of great talent in that group, the under-16s are in the All-Ireland final, the minors will be there and the intermediates are in the final in two weeks. There’s a great bunch of players there, certainly since I’ve been there over the last three years. I can’t speak highly enough of them.

“A lot of new players have come through, the likes of Katie Nolan and Mary O’Connell, who have become leaders of this group, but that’s what you need - players like Denise Gaule, Meighan Farrell there to push them on.”

And the future, he reckons, looks bright.

“When you win something it’s important to build structures and to have a good relationship the whole way up through county teams,” he added. “John Scott (Kilkenny intermediate manager) and myself have worked together and we have 13/14 players on the panel who are part of the intermediate set-up.

“We are anxious to bring in young players, give them a taste of senior hurling and still play with the intermediates. There are a lot of girls in that situation who will be playing in the final here in two weeks, so it’s a great experience and exposure for them. Hopefully they’ll push on and wear the senior jersey in a few years’ time.”