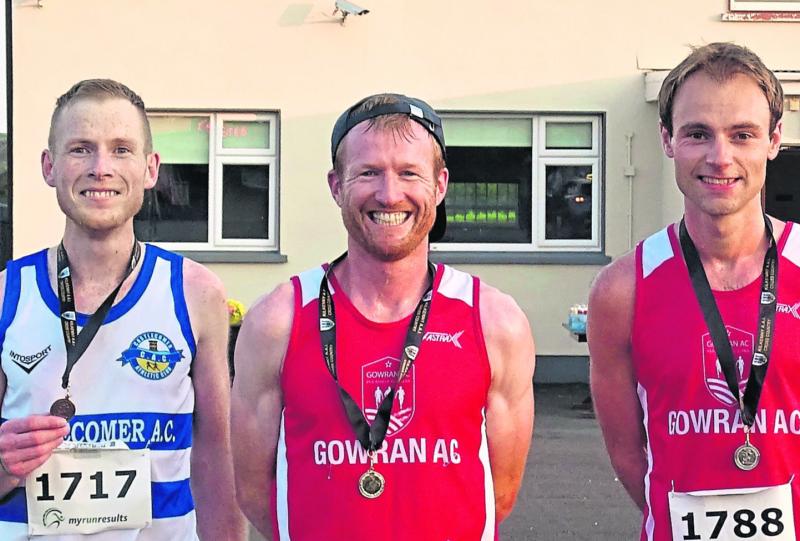 Athletes are now in the twilight season, where track and field is over for most and cross-country racing has yet to begin - the season where, in normal times, road races would be prolific and most are taking in 10km, half marathon and 10 mile races as preparation for the marathon.

Road races are few and far between at the moment. They are a nightmare to organise since race entry is limited to 200 people. As a result, the county 10km road championships is one of barely a handful of road races that have been organised nationally.

Hosted by St Joseph’s AC, and starting from the club grounds in Rosbercon, the course meandered through hills and small country roads until it reached the vast expanse of the River Barrow at the Pink Rock - a South Kilkenny spot well known by runners who choose the flat surface with river views to complete their training programme.

From the start of the race it was Niall Sheehan (Gowran), Dean Rowe (Gowran), James Kelly (Castlecomer), James Morrissey (Castlecomer) and Luke Morgan (St Senan’s) who were tightly packed up front.

The tree-shaded country roads providing great shelter from the strong August sun. Up and down hills, the runners took each undulation in their stride – looking both comfortable and efficient in their running.

As the pack descended onto the Pink Rock they had created a gap of more than 30 metres from the rest of the field. The pace sped up a little as the route took in the flat terrain of the river side. Morrissey came on the shoulder of Sheehan and Rowe will both Kelly and Morgan trying to stay in touch.

Past the river and the left turn towards the bridge, uphill a little, Morgan was drifting a little, with Kelly showing some signs of stress.

As the hills increased for home Sheehan and Rowe remained in front, pulling away from Morrissey on each steep incline.
While Sheehan and Rowe were having their own battle up front, James Morrissey and James Kelly were battling it out for that bronze medal - the two Castlecomer men not giving an inch to each other.

In the final half kilometre it was the experience of Sheehan, who pulled away from the youth of Rowe, that told.

Niall Sheehan was the winner, from Dean Rowe with James Morrissey just pulling away from James Kelly. Luke Morgan (St Senan’s) was fifth with Eamonn O’Connor (KCH) in sixth place. Gowran AC won the team title from St Joseph’s with Castlecomer in third place. It was great to see Castlecomer beginning to feature in the team events.

The women’s event was not as closely fought. Siobhan McArdle (Kilkenny City Harriers - KCH) left no doubt as to her fitness as she led all the way from start to finish.

The Harriers runner was some two minutes ahead of Anne Watkins (St Joseph’s). While Watkins may have made up some ground in the latter part of the race, it was not enough to rein in the strong lead that McArdle had built up. Mary Molloy (Kings River) was a further minute adrift in third place.

St Joseph’s AC had a very strong group of women competing and were no match for other teams. They took both first and second teams. These women are, of course, familiar with running the Pink Rock route – their usual training spot.

The race was run in the usual excellent fashion by St Joseph’s AC who have proved their expertise in running this race for the last few years.

Some of the athletes racing are in preparing for the up and coming Belfast Marathon which has been designated as the Athletics Ireland National Marathon championships for 2021 as the Dublin Marathon is not permitted to take place under existing government Covid restrictions.

One may deem it a little premature to mention the words cross-country while the sun still has its summer warmth, but the truth is that most athletes are now back training for the cross-country season.

There is something nice about taking those long runs on weekend mornings with the sun high in the sky, warming your back, while the morning dew blinks back at you. Whether it’s the hills of Corbally or the Castle Park, it is refreshing to see athletes back in groups doing what the most love to do – run, laugh and get fit.
The cross-country season is packed with lots of fixtures – all already planned. The season kicks off on September 19 with the St Senan’s AC Open cross-country in Kilmacow.

St Senan’s AC were perhaps the only club in Ireland who managed to hold an open event last year. Athletes came from Louth, Galway, Cork and quiet a number of other far away counties too as well as the usual closer counties. This year promises to be as good an event as last year.

The men’s and women’s titles should be interesting for both races. KCH have won the men’s team event for the last number of years with St Senan’s winning the women’s event.

Can either of these teams be caught? There have been many athletes throughout the county who have improved since 2019 along with juveniles who are now competing at the senior ranks.

The women’s event should see an interesting duel between Lauren Dermody (Castlecomer) and Bronagh Kearns of St Senan’s, while the likes of Sally Forristal (St Joseph’s), Grace Richardson (KCH) and Adele Walsh (St Senan’s) could also make an impact.

With Brian Maher (KCH) the reigning champion out with injury this leaves Eoin Everard (KCH) to fend off any challenges from the remaining athletes. Many are certain to give it a try, with Gowran’s Dean Rowe and Niall Sheehan and Castlecomer’s James Kelly and James Morrissey among the leading contenders, while Luke Morgan (St Senan’s) cannot be discounted.

While Everard may certainly have the advantage in the individual event the team event is probably going to hold the interest for many.

St Senan’s have become stronger while Castlecomer, who were devoid of a team for many years, now have a group of six men who might challenge for medals. St Joseph’s of course are there too. While one can never discount the strength of the city club, who still have many capable athletes to back up Eoin Everard, undoubtedly the absence of Maher will open up the team race a little more.