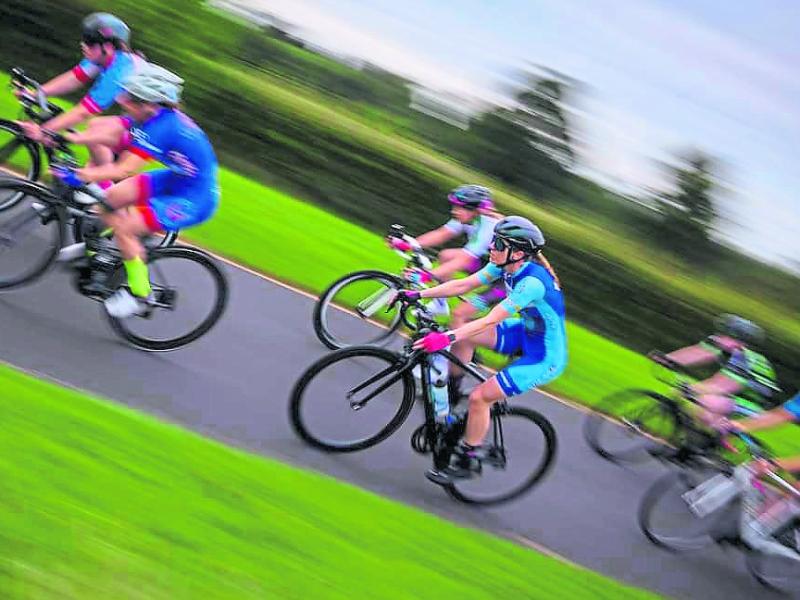 Elizabeth Kent will be flying the Kilkenny flag when she takes to the start line for this week’s Rás na mBan PICTURE: Matthew Lysaght

he saying goes that a little local knowledge can be handy, but when it comes to the hills around Tullaroan it’s fair to say Elizabeth Kent knows every bit of tarmac.

That could prove to be more than helpful when she and the rest of the field get to the second stage of this year’s Rás na mBan!

“I’m excited-nervous,” she said as she looked forward to tackling the Rás, which starts today (Wednesday) with an opening stage that ends in Callan.

“To be given this opportunity is amazing,” she said. “This is a chance to grow as a cyclist, to line up with the professionals. I remember marshalling at the Rás on the Nuncio Road, thinking ‘wouldn’t that be amazing?’. Sure, it might be the toughest thing I’ll do in my life, but it’s exciting.”

Marshall no more. Kent, who will ride with the Women’s Cycling Ireland team, is very involved in this year’s event, which will feature over 100 riders representing 21 teams and 14 nations.

“I’ve been given this opportunity to race through the Women’s Commission of Ireland, a voluntary group which helps develop women’s cycling in Ireland,” she said. “They’re an amazing group. People in the Commission have been involved with women’s cycling for years, from road racing to track cycling. This year they are entering two teams in the Rás - an A and a B team. I’m part of the B team. I’ve represented the Women’s Commission in a number of events over the last two years - I’m relatively new to racing, as Covid threw a spanner in my plans for racing and to get more experience.

“The WC teams are made up of amateur cyclists, so going into a field which is predominantly made up of full-time athletes is a great challenge,” she said. “To be able to take part in an event of this size will be amazing.”

While her racing career may be short, Kent has clocked up the miles, building the experience needed to take on an event with the mantle of the Rás.

“My first racing experience was in January 2019,” she said. “I was lucky enough to come across a women’s racing team, Arcana Cycle Team who are based in Kildare, who do track and road racing. In 2019 the Women’s Commission sent a group to Manchester to ride on the indoor velodrome - we don’t have one in Ireland - so it was an experience to ride on the boards and 42 degree angled track.

“After that I was lucky to be selected for the Cycling Ireland national road series,” she added. “The WC entered two teams in the women’s four-day event in Newcastlewest, so that was four days of racing - my first experience of stage racing.”
And the newcomer enjoyed the event.

“I survived,” she said with a smile. “The opportunity to learn from other riders and to experience how your body reacts to a four-day event was incredible.”

It’s an amazing journey for Kent, who only took up cycling a few years ago. Like many who start the sport, she did it locally.
“I joined the Marble City Cyclers in September 2017,” she said. “They’re like another family to me. When I started out I hadn’t been on a group ride before, so it was a new experience, but it got my fitness up and helped me get used to group riding. I was a horse rider originally, and had an accident, so when those days came to an end I was trying to find a sport I could fit into. I found cycling - and loved it.”

The accident Kent referred to wasn’t just a slight knock. An accident in 2010 left Kent with a T6 to T9 spinal fusion. She had a further operation some years later to remove the fusion, so the mental and physical toughness needed for an event like the Rás is there.

And toughness is exactly what’s required, as she knows too well.

“I marshalled at the Rás for a number of years and I’ve seen the pain the girls go through, the emotional and physical exhaustion they’re at by the end of the five days,” she said. “It’s going to be tough, but we’ve a great team who work together and that will help us along.”

While there may be prerace nerves, for Kent it promises to be a great experience.

“From the minute we leave the Springhill Court Hotel I know it will be a shock to the system,” she said.

“Talking to some of the other girls who have competed before they mentioned a lot of things that will hit the senses like never before - the smell of brakes and tyre rubber - but it’s all about being able to remain calm, go with the flow and pedal your bike - and keep it upright!”