Schmid happens! Kaia is queen of Callan as stage one of Rás na mBan rolls into town 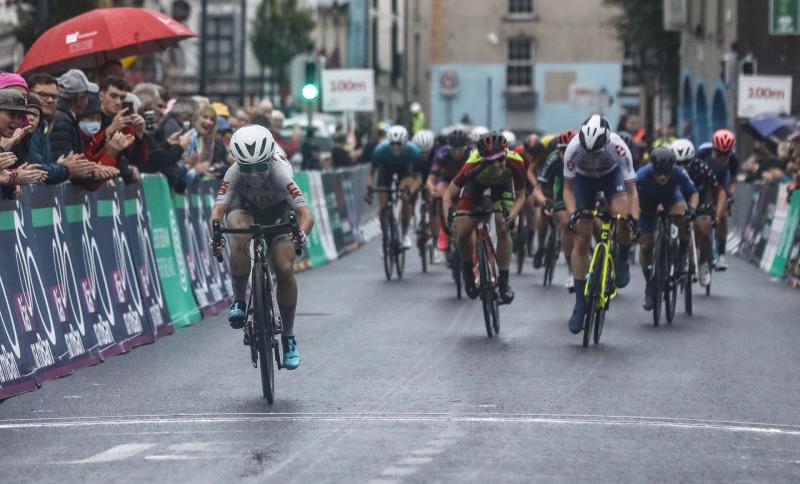 American rider Kaia Schmid of the LUX cycling team races to victory in the first stage of the Rás na mBan, which finished in Callan PICTURE: LORRAINE O'SULLIVAN

While the weather failed to shine, the rain couldn't dampen the spirits of the peloton or fans who turned out for stage one of the 2021 Rás na mBan.

The opening stage of the Rás produced plenty of excitement, as the riders took on a 70km circuit that finished with a rising sprint in Callan. American rider Kaia Schmid of the LUX cycling team saw off the challenge of the rest of the pack as she dashed to the line to win the maiden stage, beating Abi Smith (British Cycling) and Jessica Finney (CAMS Racing).

Schmid will wear the overall leaders' magenta jersey for tomorrow's stage, but took home more souvenirs from Callan - she also grabbed the stage winner's blue jersey, the best young rider pink and white jersey and the Sport Ireland points classification blue jersey. Jo Tindley of Pro-Noctis - Redchilli Bikes took points on both of the day's climbs and will wear the orange Queen of the Mountains jersey. The green jersey for best Irish rider will be worn by Alice Sharpe of Cycling Ireland, the team Glenmore's Mia Griffin is part of.

Stage two of the Rás is a rolling 89.5km road race starting in Kilkenny and finishing in Piltown. Riders race to a 19.6km finishing circuit, including two Queen of the Hills at 55.9KM and 75.6KM. The route is:  Kilkenny (Springhill Court Hotel) – Stoneyford – Knocktopher – Ballyhale – Mullinavat – Piltown – two laps of circuit via Templeorum – The Sweep – Piltown.