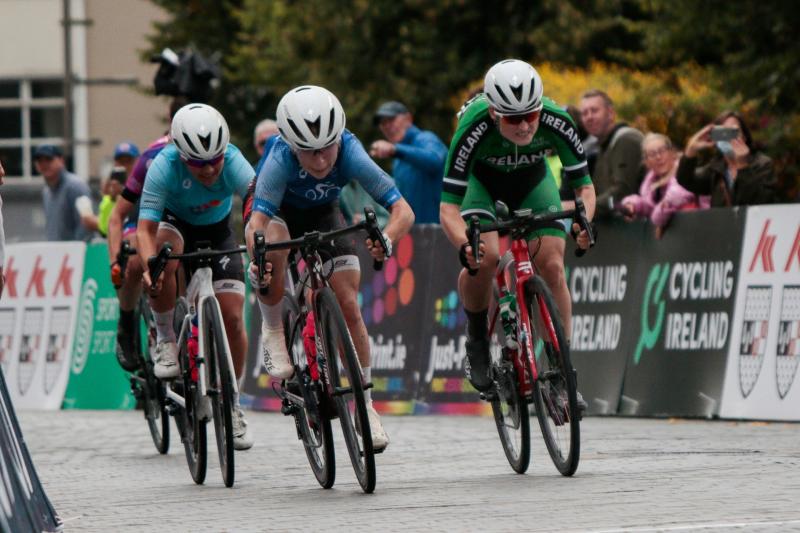 Mia Griffin was a whisker away from rounding off the Rás na mBan in winning style as the event rolled into Kilkenny for a thrilling final stage.

The Glenmore native was closing in on a stage win, but a late dash saw Kaia Schmid take her second win as she sprinted home on The Parade in front of Kilkenny Castle.

Schmid overhauled Team Ireland's Griffin, who was first into the final corner in her bid for a first stage success for Ireland in six years.

Stage five winner Makayla MacPherson made it two US Team Lux riders on the final stage podium in third place to cap a remarkable first visit to Rás na mBan for the Colorado-based team, a major development squad in US cycling.

Best of the Irish overall was Alice Sharpe of Team, fourth at 57s from Shackley, with her team mate Kelly Murphy fifth at one minute and 31 seconds and Natalie Grinczer (CAMS Basso) sixth, one minute 49 seconds behind the winner while the Irish National team scooped the overall team prize.

Shackley ended any mathematical chance of losing the Wicklow 200 IVCA Queen of the Mountains title by leading the field across the top of the single classified climb of Woodstock after 42km.

By the end of the day she had also taken the Women's Cycling Ireland best Young Rider jersey to go with her overall success and her stage four victory in an impressive haul for the 20 year-old Scot.

By then the early attackers had been closed down, the most notable escape being Dewi Nicolai's foray, the Team Noord Holland rider quickly replaced by Team Torelli's Fiona Shroeder before she too was overhauled on the approach to Woodstock.

With differing agendas and more than half the stage still to run, the group lacked cooperation and a large bunch reassembled before Fernanda Yapura launched a solo bid for glory with 28km remaining.

The world championship rider from Argentina riding with the French Team Macadam's Cowboys squad steadily increased her advantage as Linda Kelly (Cycling Munster) tried to bridge to Yapura before being reabsorbed.

Yapura's lead extended to 58 seconds with 15km to go before Team GB and Team Ireland began an urgent chase at the front of the chasing bunch. The leader's advantage soon began to shrink and the Andy Schleck team also joined in the chase as the lead shrank to 32 seconds with 10km remaining - it was still 21 seconds with 4km remaining.

To the relief of the peloton and the disappointment of the exhausted Argentinian, Yapura was retained inside the final 3km as the bunch set up for a group sprint. Team Ireland's Alice Sharpe lined the bunch out inside the final kilometre as Mia Griffin prepared to launch her final kick. Griffin took command on the approach to the final left hander and powered up The Parade with dreams of glory on home roads.

Schmid had other ideas. The Massachussets rider sprinted past Griffin in the last 10 metres to replicate her stage one success in Callan, delivering a fast finish to complete the 15th edition of Rás na mBan in fine style.
Stage three winner Abi Smith ended an excellent week for Team GB with second overall, five seconds behind her team mate with Loes Adegeest in the final podium position, 44s behind the winner.
Smith took the Sport Ireland Points classification to complete the haul for Team GB who secured their second win in the last four editions.