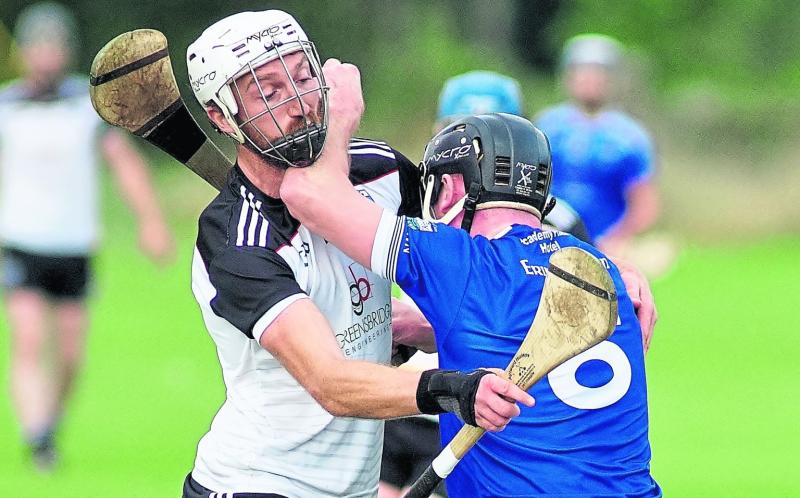 Mullinavat continued an enterprising league campaign when they ran out fully merited six point victors over Erin’s Own in Thomastown on Saturday afternoon.

The win ensured Mullinavat finished runners up in their group behind Clara and thus qualified for a shield final against James Stephens this weekend.

More importantly second spot assured Mullinavat of a place in the championship quarter-finals while they also maintained their championship safety for 2022 and that in itself was a fair achievement as it didn’t look very likely when they were heavily beaten by Clara in round one but successive victories over O’Loughlin Gaels and Erin’s Own have set up the rest of the season perfectly.

The result is all the better when you take into account that they played the final 15 minutes a man less after Padraic Gahan was given a straight red card for a high challenge on John Dowd.

As good a victory as it was, Erin’s Own will be disappointed in the way they let the game slip in the final quarter as even after the Mullinavat dismissal they still struggled to make an impact on the scoreboard.

A late Sean Buggy goal for the Castlecomer lads had no impact on the result but it did on the championship draw as Erin’s Own moved from facing defending All-Ireland champions Shamrocks to Tullaroan and while that may seem more favourable, Martin Fogarty’s side will need major improvement if they are to get a crucial first win and avoid the perils of a relegation battle.

Mullinavat raced out of the traps and almost goaled within seconds when Brian Phelan had a shot blocked on the line before John Walsh knocked over a 65.

Erin’s Own battled back with a trio of points as Declan Dunne, Jack Buggy and Conor McMahon all found the target.

Erin’s Own were the better side in the opening quarter and if it wasn’t for the accuracy of John Walsh they would have been further ahead but after Conor Delaney and Martin Boran combined to score, Erin’s Own led 0-6 to 0-4 at the first water break.

Despite the deficit, Mullinavat maintained a valiant goal threat and although Erin’s Own goalkeeper Tom Brophy saved brilliantly on the double from Liam Fennelly, their resistance eventually swayed in the 23rd minute when danger man John Walsh fired home on the back of Fennelly catching a long delivery into the square.

That levelled up matters at 0-7 to 1-4 and Mullinavat gained confidence from the opening goal as they moved into the lead with Walsh causing major problems for Erin’s Own in a game he finished with a tally of 1-13.

Walsh’s excellence from play and placed balls looked like it would enable Mullinavat to a half-time advantage but they were rocked by a stoppage time goal from Jack Buggy as Erin’s Own led 1-10 to 1-9 at the halfway mark of the game.

Like the opening half, Mullinavat started the second period in style with captain Willie O’Dwyer levelling up matters.

Erin’s Own responded with points from Buggy and Shane Feehan but something then clicked in the Mullinavat psyche and they dominated the rest of the game.

Trailing by two, Mullinavat quickly reeled off 1-2 without reply to retake the lead with Bill Dempsey grabbing his side’s second goal.

As a result Mullinavat led 2-12 to 1-12 and all their good work seemed to be outdone when Padraic Gahan was dismissed but the Erin’s Own storm never transpired.

Buggy nailed a couple of frees while Declan Dunne and Michael Murphy also pointed but Mullinavat always had an answer with Walsh, O’Dwyer, Ger Malone and Joe Gahan all scoring as they moved seven points clear.

Sean Buggy got a late consolation goal for Erin’s Own but that’s all it was as Malone and Walsh rounded off the scoring on a job well done for a much improved Mullinavat outfit.