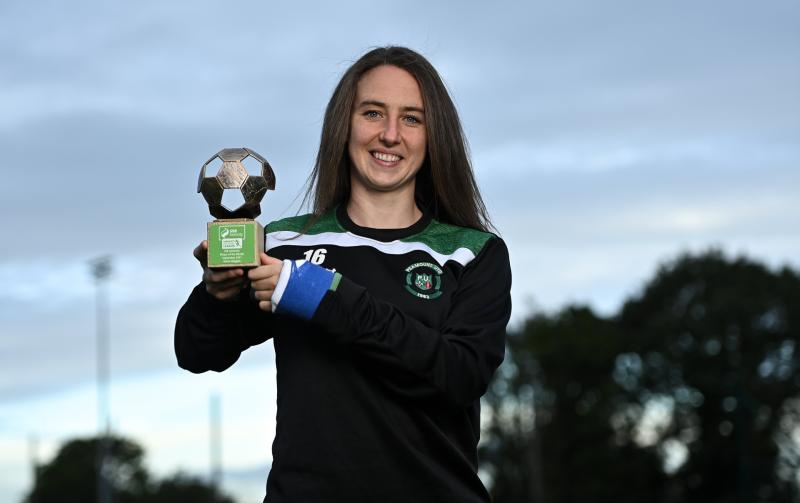 Karen Duggan may be no stranger to picking up trophies but she has learnt to take nothing for granted in the SSE Airtricity Women's National League.

The Kilkenny native has been named as the winner of the SSE Airtricity Women's National League Player of the Month Award for September.

It is another trophy to add to a cabinet that is already stuffed with two Player of the Season awards, six Team of the Season honours, three League winners' medals and one FAI Women's Cup winners' medal. Plus a few runners-up medals that may not be polished as the others.

Yet, the Peamount United player is still fighting in every game just as hard and never expecting for luck to just fall her way. Take last weekend for example, a gritty duel away to Bohemians and she fractures a couple of bones in her hand, but she played her part to help the champions take the three points.

Peamount need players like Duggan to keep producing big performances if they are to stay in front in one of the best title races in League history. The 30-year-old - who was switched to centre-back in September - is happy to take any plaudits, as long as she can share them with her team-mates.

Duggan said: "I'm very privileged to win an SSE Airtricity Player of the Month award. I think there was a lot of stiff competition this month. It was an interesting month, obviously we had the break in the League and fewer games to look at but the standard has been really, really high."

Leanne Sheill, SSE Airtricity Marketing Manager, said: "Congratulations to Karen Duggan, on being named SSE Airtricity Women’s National League Player of the Month for September. It’s been great to see the commitment and quality that Karen and Peamount United have been shown over the last month with them climbing back to the top of the League.

"As proud sponsor of the League this season, we’ve been delighted to see the continued return of spectators to stadiums in recent weeks. And we expect this will make the thrilling title race that is unfolding all the more special! We can’t wait to see how it all unfolds and who comes out on top."

Duggan hailed the involvement of SSE Airtricity as title sponsors of the League, saying: "The impact of having SSE Airtricity has been huge on the League. It becomes more and more visible, we're able to get more and more people out to the games because of what we're seeing on Twitter and online...and long may it continue.

"It's going to help participation in the underage Leagues and help us to grow from strength to strength."