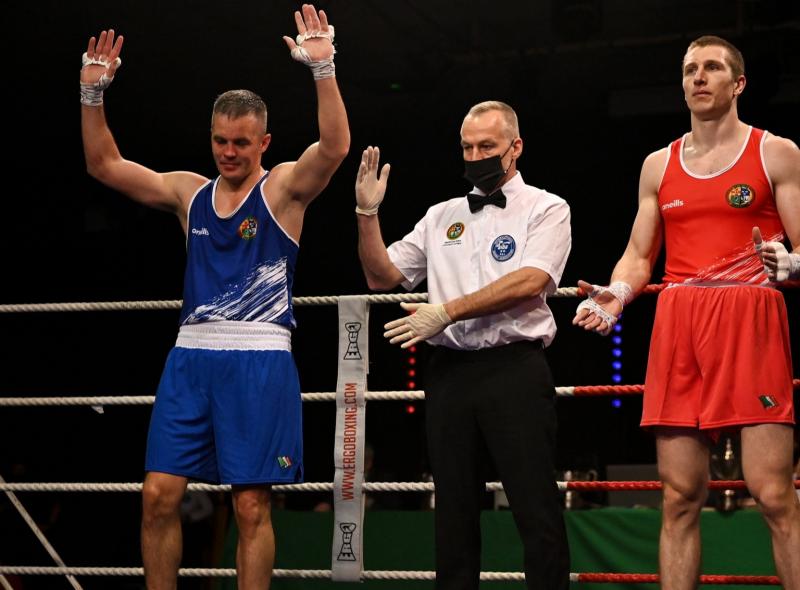 Darren O’Neill of Paulstown Boxing Club, Kilkenny, left, celebrates after his victory over Faolain Rahill during their 86kg bout at the IABA National Elite Boxing Championship.

Paulstown's Darren O'Neill became the oldest elite champion in Ireland after he impressively collected an eight national title at the National Stadium in Dublin on Saturday night.

O'Neill claimed the 86kg Cruserweight crown when running out a unanimous victor over Faolain Rahill of DCU Boxing club.

The 36 year old captained the Irish Boxing team at the 2012 London Olympic games and although only competing in the championships at short notice, he still found a way to claim the title.

O'Neill had much too craft for his opponent and speaking afterwards he spoke about the joy in winning an eight senior title.

"Nobody was expecting me to be back here again so it really is incredible",  he told the Irish Examiner

"For the last few years, I’ve been sitting ringside and looking in thinking: ‘I still have enough for that!’

“The weekend before the entry deadline this year, I was down at home and I did a few rounds of pads with my dad. I just put my name in after that; I suppose it worked out!