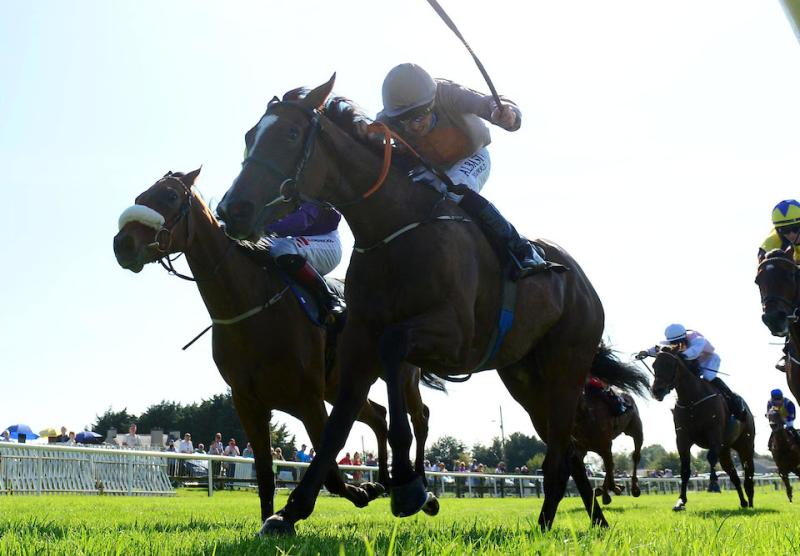 Capitulation on her way to winning at Bellewstown and the €1,000 purchase now has Sunday's €120,000 Irish EBF Auction Series Race Final as her target

It has been a season Ado McGuinness will never forget. Having scooped the €96,000 first prize in the Group 2 Irish Thoroughbred Marketing Cup in Doha last February with Bowerman, McGuinness tore into the Irish campaign with relish and has long since shattered his previous best tally of winners for a turf campaign, at 31 and counting.

Eight days ago, last year’s Down Royal Irish EBF Auction Maiden winner, A Case Of You provided his trainer with a first Group 1, responding generously to the urgings of Ronan Whelan to hit the front on the last stride in the Prix de l’Abbaye at Longchamp.

Now, the boss of Skylark House Stables in Hayestown, just outside the Dublin seaside suburb of Lusk, is dreaming of Breeders’ Cup Turf Spring glory in Del Mar with the Gary Devlin-owned son of Hot Streak, who has followed in the footsteps of fellow Irish EBF Auction Series graduates Helvic Dream and Laws Of Indices by progressing to become Group 1 winners this year.

This titanic trio were all bought cheaply and in Capitulation, a juvenile filly owned by Devlin in partnership with Nigel O’Hare who will take her place in next Sunday’s Irish EBF Auction Series Final at Naas, McGuinness has another virtual steal who while unlikely to follow in her stablemate’s hooves, has already provided a remarkable return for the €1,000 she was bought back for at Goffs’ online sale last February.

The Elzaam two-year-old had already been in the first four on four occasions when being rewarded with a gutsy nose triumph in the Irish EBF Auction Maiden at Bellewstown at the end of August, bagging the €12,000 first prize for connections and boosting the cut-price acquisition’s prizemoney to €26,025, while also boosting her own value considerably.

No wonder McGuinness likens her to an ATM and is optimistic that with the €120,000 pot for the Irish EBF Auction Series final being doled out down to sixth, she will depart Naas with further dividends from that initial nominal outlay.

“She’s a bit like a cash machine going racing every day, she’s bringing you back a cheque,” says McGuinness in the latest edition of the Irish EBF Auction Series Shout Out. “She’s a very honest filly. She’s in the sales at the end of the month in Newmarket. You could sell her anywhere around the world. She’s not going to be a superstar but she’ll win plenty of races.

“(The final) is definitely on the agenda… There’s no reason why she can’t gather a few quid. She’s a very honest filly and I think she’ll get a cheque somewhere. That’s the good thing about it. You don’t have to win the race, there’s great money there.”

McGuinness has been active at the yearling sales in Goffs and Tattersalls Ireland and is launching a new syndicate this week to target the total €699,000 prize money on offer from its 24 races.

“The prizemoney is huge for winning a maiden... You don’t have to win it, even being placed you’re getting a right few quid… We’re launching a new investment yearling plan. We’ve bought six or seven at the moment and we’re going to buy a few more.

“If lads give 15 grand for a horse and all of a sudden, he wins a maiden, you nearly have the price of him back, plus you have him sold. Even if he’s second, you’ve a nice few quid and you can get him sold. It’s a great incentive to be able to showcase this quality of horses and I’m not looking at Galileos and Dubawis going by me. That is very important for trainers that aren’t huge, big trainers, to showcase what they can do and sell the horses as well and survive.”

McGuinness has certainly advertised his wares with A Case Of You, bought for €3,000 at the Goffs Sportsman’s Sale two years ago. The Dubliner acquired him after he followed up the Down Royal success that was worth €13,800, by winning the Group 2 Anglesey Stakes at The Curragh exactly 12 months ago when in the colours of then trainer, John McConnell.

He had already won twice for his new yard when runner-up in the Flying Five over Irish Champions Weekend, before confirming McGuinness’ belief that he was an improving individual on Arc day in France.

“There’s a great buzz in the yard all week. We’re just so happy. There’s nothing too big for us this week.

“We were overjoyed. It was unbelievable. So many things go through your mind. Is this happening? It was such a close finish so you had to wait for a photo finish as well. You were waiting and people saying, ‘You have it, you have it!’ You’re standing there waiting, ready to burst and we certainly did burst with the emotion.

“It’s all systems go (for Del Mar). We’re gonna go to the Breeders’ Cup with him at the moment. We done a couple of days with him on the beach after we came back, just chilling. He had a little canter this morning.

“He’s never left a nut. He ate up, even when he won the race, the boys fed him before they put him on the lorry and he licked the pot clean. That shows you the type of horse he is. He’s just so laidback. He wants to drink, eat and sleep and race and that’s a great thing to have in a horse.

“We felt from the start of the season right to now this horse has got faster and a lot faster. We’ve a couple of fairly smart, good, solid listed and black-type sprinters. Before, if you start off with an early three-year-old and you’re working them with these type of horses, they struggle with them but believe you me, these horses are struggling with him now.

“Especially in the last two months, I can’t believe how this horse has got faster and faster. That’s why we dropped him back to sprinting. We knew it would sharpen him up anyway because he’s so laidback. As a five-furlong sprinter, you need them to stay as well. You can get a horse with a burst of speed and they tread water in the last half a furlong. This boy is the opposite. He’s getting quicker in the last half a furlong. That’s what you really want in a very good sprinter.”

The deadline for forfeits/final entries for the Irish EBF Auction Series final is tomorrow, October 12, with final declarations on Friday and the final on Sunday.