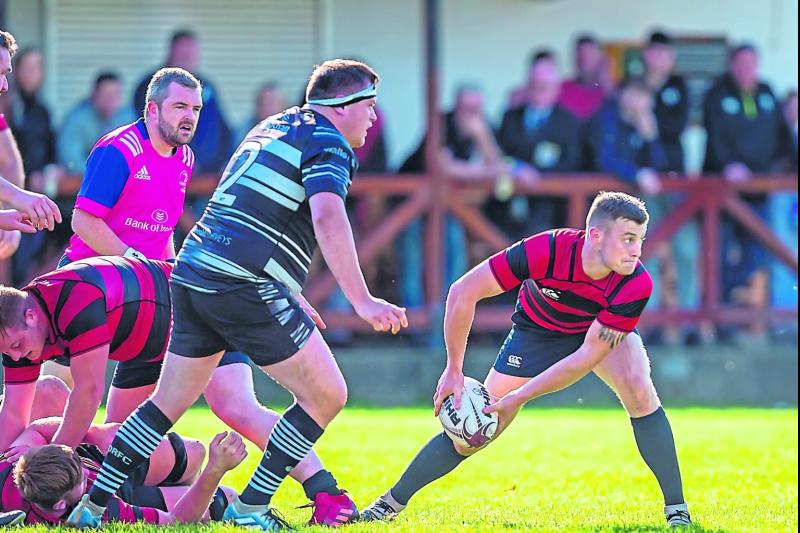 The Kilkenny scrum half looks to get the ball away during the home side’s 12-10 victory over Dundalk in the Leinster League at Foulkstown on Saturday afternoon. Picture: Mark Desmond

Kilkenny kept their impeccable home record for this season intact last Saturday after edging a cagy affair with Dundalk in Foulkstown.

The truth be told it was a poor game with little excitement up to the 75th minute where a moment of brilliance by Liam Caddy saw Kilkenny score a match winning score.

Driving Kilkenny back over their line, Dundalk got the opening try of the contest halfway through the opening half and with them nailing the conversion, it was 7-0 to the visitors.

A few minutes later Dundalk came again, this time their approach was halted by Shane O’Riordan, who got in over the tackled player to win a penalty, allowing Kilkenny to clear their lines.

From the line out Kilkenny gained ground, through the phases they found themselves five metres out, off the base of a ruck Ciaran Sutton sniped through to get the try, Corkery nailed the conversion, taking the affair to a tie.

As half time approached both sides played to the best of their ability but could not break the rearguard, leaving the half time score 7-7.

Large parts of the second half were poor, infringements and endeavour was the theme but just like the end of the first half, neither team managed to mark the moment of brilliance to get vital scores on the board.

Then in the 60th minute Dundalk took the lead.

An infringement on halfway gave Dundalk a kick at goal, which their kicker made no mistake with, giving his side a three point lead.

After this Kilkenny bucked up and got themselves into third gear.

In the 75th minute, Kilkenny produced the moment of the match.

McDonald threw a wonderful weighted pass to Caddy, gliding in parallel to the clubhouse Caddy stepped past two players before offloading to support player Lyndon Brannigan.

Pinning back his ears Brannigan brought play to the 22m line, popping a splendid offload to Podge Mahon, stopping 2m from the line Mahon offloaded to Jake McDonald who was left with the simplest of finishes.

Kilkenny missed the conversion, but with a score of 12-10, Kilkenny felt like victory was within their grasp.

In the 80th minute more good Kilkenny play allowed Mahon and Conor Walsh to link up, with Walsh stopped just short of the line.

As the final whistle went the home crowd were jovial with home players feeling relieved. All in all it was a great win, a hard fought win, but a poor match.

Kilkenny cannot continue to start slow in attack, defense is solid and composed, but another side could exploit a slow attacking start.

In the game both sides huffed, puffed, but struggled to blow the house down, which is testament to both defences.

Kilkenny will be disappointed having missed 11 points from place kicks and had two tries disallowed, one for a knock on over the line, the second for a forward pass in the final assist.

Coming into the game Dundalk were much fancied as league contenders having won both opening matches comfortably.

Beating one of the league favourites is a big milestone for Kilkenny, that firmly puts them in contention in the league where they now sit in second place behind Seapoint.

As is the nature of an eight team league one slip up could see them drop down the league table but for now it’s a very bright start.

Next up for Kilkenny is a trip to Monkstown next Saturday afternoon.