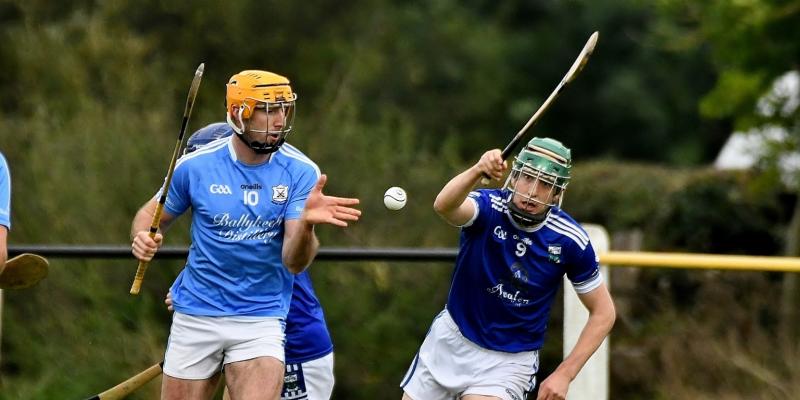 For most of this entertaining St. Canice’s Credit Union Senior Hurling Relegation Semi-Final between Graigue Ballycallan and Erin’s Own in Páirc Lachtain Freshford on Saturday there was very little between two evenly matched sides. They last met on the 11th Sept. in the league and that game ended in a draw.

There was never more than three points between the teams at any stage of this game except in the final moments when the winners scored their last point to secure a deserved four-point victory and in turn leave their relegations worries aside for this year.

Neither team could stamp their authority on the game except in the closing stages when Graigue Ballycallan scored a goal and three points without reply to see them over the line.

In a game of huge significance for both teams, the exchanges were close all through the opening quarter. Some over-rash challenges were punished by the respective free-takers, Jack Buggy (Erin’s Own) and Sean Ryan (Graigue Ballycallan) in that period.

Billy Ryan (GBC) was the stand out player in the opening quarter pointing after fifteen seconds when he ran on to a breaking ball. He scored two more points seven minutes later and was more than a handful for the Erin’s Own defence.

At the other end of the pitch Michael Murphy was back to his best giving a powerful performance at centre half forward. The winners switched Aaron Brennan to mark Murphy and they had ding-dong battle for the remainder of the game.

Shane Feehan and Stephen Daly scored a brace of points each for Erin’s Own in the opening quarter with the Comer men showing a strong work ethic all over the field along with some good passing between defence and attack.

Anytime Erin’s Own threatened to move ahead they were hauled back with Sean and Billy Ryan plus hard-working midfielder Tom Dunphy pointing for the winners leaving them trailing by the narrowest of margins at the first water-break.

The second quarter played out in a similar manner to the first with the respective free-takers again to the fore. It did look like the teams would go in level at the interval until the third minute of injury time when Bob Murphy scored a spectacular goal for Graigue Ballycallan.

While the build-up to Murphy gaining possession was impressive with a number of Graigue Ballycallan players involved, he was still a long way from his opponent’s goal when he got possession. Just as he set off on a run, a gap opened up in the Erin’s Own defence and Murphy, who was selected at centre half back, but switched to the number six position appeared to have lost possession. In a flash he quickly pulled on the ball and it flew past Tom Brophy in the Erin’s Own goal.

Despite the setback of conceding the goal, Erin’s Own started the second half impressively with three points on the trot from Shane Feehan, Jack Buggy (free) and Conor Fogarty. That tied the game and it was still level when the sides grabbed goals in quick succession.

The first to Graigue Ballycallan came when an Erin’s Own defender failed to control the ball leaving the alert Sean Ryan to race through to score. Straight from Tom Brophy’s puck-out the ball broke kindly for Michael Murphy who rattled the back of his opponents net.

The contest was still wide open until Graigue Ballycallan scored their third goal when the unmarked Jesse Roberts availed of some good passing to score.

Erin’s Own had a great opportunity of a second goal but Declan Dunne’s goal-bound effort was somehow kept out by brave goalkeeping by Ciaran Hoyne who also manged to point a long range free in the twentieth minute.

Substitutions played a big part in the Graigue Ballycallan victory with Eamonn Egan and Tommy Ronan making good contributions when introduced in the second half.

Erin’s Own failed to score in the closing ten minutes of the game as the winners dominated during that crucial period.

The winners will be delighted to have secured their senior status for another year. Cillian Egan and Conor Flynn were solid in defence with Tom Dunphy battling bravely at midfield. Billy Ryan was outstanding especially in the first half with Sean Ryan and Conor Murphy, who played very deep to good effect in the second half, impressing in attack.

Niall & Conor McMahon along with Ciaran Wallace stood out in the Erin’s Own defence with Conor Fogarty having a fine game at midfield. Michael Murphy was the outstanding player on the Erin’s Own team with Shane Feehan and Jack Buggy also making strong contributions. But, the Comer men will be disappointed at their late fade-out when the winners pulled away for victory.