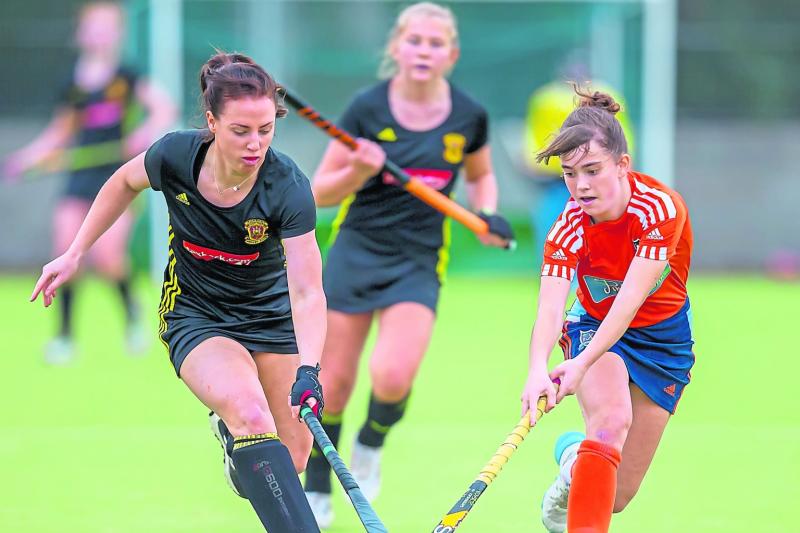 The Kilkenny First team welcomed Ulster opponents when Armagh paid a visit to the Marble City for their Irish Hockey Trophy meeting.

The game began with high intensity and fast passing, quickly leading to a short corner won by Paula Farrell in the opening minutes of the game. The Northern side put up a solid defence, but was swiftly broken down by Laura Walsh finishing with a goal for the black and amber side.

The early goal set a very high tempo for the rest of the game for both teams. Fast counter attacks were tactically stopped by the Kilkenny defenders Ciara Clarke, Tyla Sanderson and Ava Murphy holding a strong back line, with goalie Doireann McCurdy keeping the Cats in the lead.

Before the half-time whistle Armagh evened out the scoreboard by scoring from a penalty corner. This kept the Kilkenny Ladies working hard, with Sara Browne and Sue Shirley pressing the Northerners high in their own half.

Sinead Connery took control of the centre of the pitch, cleverly connecting with fellow midfielders Lily Grace and Megan Sherwood, keeping the pressure on Armagh.

Ally Carter and Gemma O’Dwyer urged the team forward making rapid base line runs down the wings of the pitch, delivering super passes to forwards Emily Brain and Charlotte Huston leading to short corner that was narrowly missed.

With the game very much still in the balance, the Kilkenny ladies came back on the field in the last quarter with sheer determination, with Laura O’Neill and Sinead Connery linking well and bursting up the pitch.

The Northern team won a penalty corner and managed to slip in a goal with a few minutes to go. Despite this, the home side continued to battle and create potential goalscoring opportunities but the Armagh defence managed to keep the score line in their favour, finishing in a 2-1 win for Northern side.

The Kilkenny Firsts look forward to a well earned break this weekend and their next fixture sees them travel to Dublin on October 30 to face Our Lady’s Firsts.