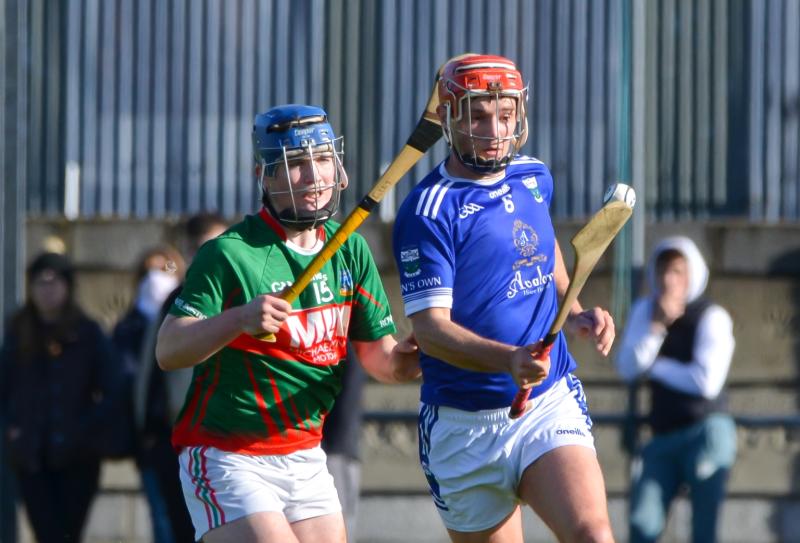 Erins Own centre back Ciaran Wallace gets away from the challenge of Eoin O'Brien during Saturday's relegation final. Pic: Billy Culleton

A large crowd turned up hoping for an absorbing contest from two teams battling for senior survival, but from an early stage what materialised was a tense and dour contest that rarely rose above the ordinary.

For much of the game the exchanges were tight and with both defences on top scores were at a premium. The tone of the game was set in the opening five minutes with both sides struggling to find an opening for a score.

Erin’s Own made the breakthrough on six minutes when Stephen Daly pointed, to be quickly following by another point for the Comer men from Michael Murphy after some neat passing among the attack.

The winners enjoyed plenty of possession in the opening quarter, but converting chances into scores was proving to be difficult especially with Kieran Joyce, Eoin Doyle and Joe Lyng excelling in the Rower defence.

Points in the 12th and 13th minutes for the Rower from the impressive Tom Doyle, following a sweet Kieran Joyce pass, and another from Jim Ryan, after he fielded a high ball, levelled the game. Those scores gave the Rower some momentum, but they were rocked in the seventeenth minute when Erin’s Own were awarded a penalty after Stephen Daly was dragged down close to goal. Michael Murphy made no mistake with a well-struck shot to the back of the Rower net. In a low scoring contest, that goal turned out to be the decisive score.

The winners landed the first score of the second quarter with Jack Buggy pointing a free, but the Rower enjoyed the bulk of the chances for much of that period. They added four points without reply from Jack Walsh (two frees), Richie Leahy and Eoin O’Brien to tie the game at the interval.

Key to getting those scores was a much better work ethic from the Southerners in the closing ten minutes of the first half. They would have added to their tally but for some wayward shooting which cost them a couple of easy points. On the other hand they were grateful to goalkeeper Paddy Lyng who brought off a great save from Stephen Daly on the call of half time.

The injury jinx that has afflicted Richie Leahy with the Kilkenny seniors returned once again early in the second half and he struggled thereafter to make any impression. He was substituted eight minutes from the end of the game.

Erin’s Own were first to score after the interval when Jack Buggy pointed a sixty-five and a free to edge his side four points ahead (1-5 to 0-6). Rower Inistioge continued to squander decent point-scoring opportunities and they might even have grabbed a goal when Eoin O’Brien’s blistering shot came off the crossbar in the seventh minute.

Both teams persisted with high balls into their respective attacks with little reward. That was especially true of the Rower attack which was well contained by a strong Erin’s Own rear-guard with Conor Delaney at full-back, Ciaran Wallace at centre-half-back and Conor McMahon outstanding all through the game.

A pointed free from Jack Walsh on seventeen minutes left the minimum between the teams, but the Rower could not build further momentum. Michael Murphy assumed free-taking duties for Erin’s Own and he pointed a brace just before the second water-break. Jack Walsh responded for the Rower, also from a free, to leave two points between the sides just as the second sos uisce was called by the referee.

It was still anyone’s game at the start of the fourth quarter, but Erin’s Own quickly took control with a pointed sixty-five from Michael Murphy and another from Conor Fogarty who was now controlling the game at midfield and helping out his defence whenever needed.

While Erin’s Own hit their own share of wides during the game, the Rower misses were the more glaring and too often, especially in the first half, they landed far too many balls into the hand of Erin’s Own goalie Tom Brophy, who was completing his thirtieth season between the posts for his team.

The hard-working John Dowd landed another Erin’s Own point five minutes from the end of the game and although Michael Galavan responded with a pointed free for the Rower, the Southerners needed a goal to save their senior status.

Michael Murphy landed the game’s final score for the Comer men from a free to seal a deserved win for Erin’s Own.

The final whistle brought understandable relief to Erin’s Own. They deserved their win as they were on top for large parts of the game with their first half goal from a penalty proving the crucial score.

It has been a disappointing year for the Rower, yet they possess plenty of good young hurlers. Getting back to the senior ranks, though, will require a big effort in 2022.