O'Brien and Blackmore team up for Naas triumph 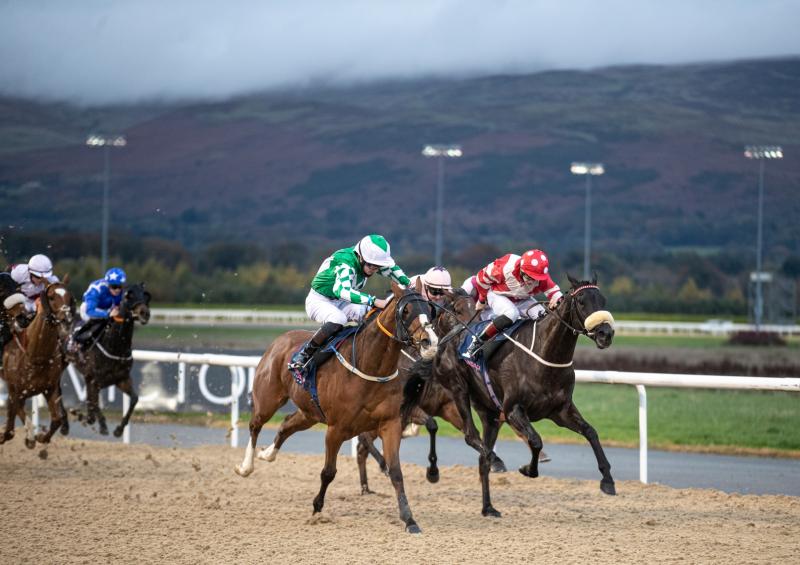 The Michael Halford-trained Golden Twilight (right) gets up late on to win under Graignamanagh jockey Mikey Sheehy at Dundalk on Friday Picture: Patrick McCann/Racing Post

The duo kicked off with Uhtred, who sped clear of his rivals at odds of 4/9 favourite to land the opening BetVictor Maiden Hurdle (2m), Blackmore having taken it up early to avoid a sprint for what is likely to be more a staying type in the future. The same set of connections combined to garner the 2m 3f BetVictor Irish EBF Maiden Hurdle on another favourite, the highly-talented 5/4 shot Eric Bloodaxe, who wowed those in attendance with his eight-length triumph.

And the young master of Carriganóg Racing also scored at Navan on Sunday, Luke Dempsey showing an appreciation for pace when producing Darasso late to garner the Grade 2 Lismullen Hurdle. Dempsey held the eight-year-old up in last before making his move four out. The fall of leader Flooring Porter certainly made the task easier but the manner in which Darasso galloped to the finishing post to beat Sire Du Berlais by six lengths suggests it would have been a very interesting finish indeed.

Graignamanagh pilot Mikey Sheehy is showing no signs of taking a winter break following a breakout turf season and the talented claimer recorded a double at Dundalk on Friday.

Michael Halford legged him up on Golden Twilight to claim the BetVictor Loyalty Club Apprentice Handicap by a neck. The Dawn Approach gelding had been dropped seven pounds after a couple of unplaced runs but responded well to Sheehy’s urgings and just proved strongest in a ding-dong battle with Hurricane Alex to prevail by a neck.

It was even tighter in the concluding Extra Places Everyday At BetVictor Handicap, as Sheehy got the Pat Martin-trained Designer Cailin home by a nose from Sense Of Romance, having stolen a march on his rivals entering the straight and just held on.

Callan rider Jack Foley has been thriving this season and was recording his 26th winner to date when navigating the Donal Coffey-trained Family Business to her her first racecourse success having run well when placed three times over timber and in a bumper.

The pair put what looked a decent field to the sword at Thurles on Thursday in the Templemore Mares’ Maiden Hurdle, the in-form Foley bounced the seven-year-old out in front and though strongly pressed three out, she had plenty in the tank and galloped clear to prevail by 15 lengths.

Emmet Mullins can do no wrong at the moment and Rightplacerighttime justified 6/5 favouritism with ease by landing the Irish Stallion Farms EBF Beginners’ Chase with ease in the hands of Brian Hayes at Fairyhouse on Tuesday.

Hayes made use of his partner’s strong galloping on a track that suits such tendencies, establishing a clear lead early on before giving the six-year-old a breather that enabled him to scoot clear once more when the chasing posse closed in, with a comfortable seven and a half lengths the distance to runner-up Yabo at the line.

Mullins’ first cousin, Danny has been riding with a huge degree of confidence since returning to action from a serious neck injury and he resumed what has been a fruitful relationship with trainer Ronan McNally in the past with Petrol Head scoring in the Safer Gambling Week November 1-7 Handicap Hurdle.

The gelded son of Valirann drifted from a morning price of 7/4 to 11/1 but the lack of confidence did not prove an accurate signpost, as Mullins made headway from the back of the field three out before delivering his partner to lead at the last and prevail by a snug half-length.

Joseph O’Brien had no luck in the Melbourne Cup (for once) just a matter of hours earlier but the juggernaut continues apace and his first cousin, JJ Slevin kept it simple on Six Feet Apart, who showed that he could be a very promising recruit to juvenile hurdling when skipping clear after the last to win the Tattersalls Ireland 3YO Maiden Hurdle, having had just two runs on the Flat earlier this year.

Mikey Sheehy has enjoyed his best ever season thanks to O’Brien and he continued that turf success by combining with the Carriganóg Racing supremo to land the Lengthen The Odds BetVictor Nursery Handicap at Dundalk with 5/2 favourite Sangria on Wednesday. Sheehy utilised a kind draw to be prominent and the Gutaifan filly quickened up well to score by a length and a half.