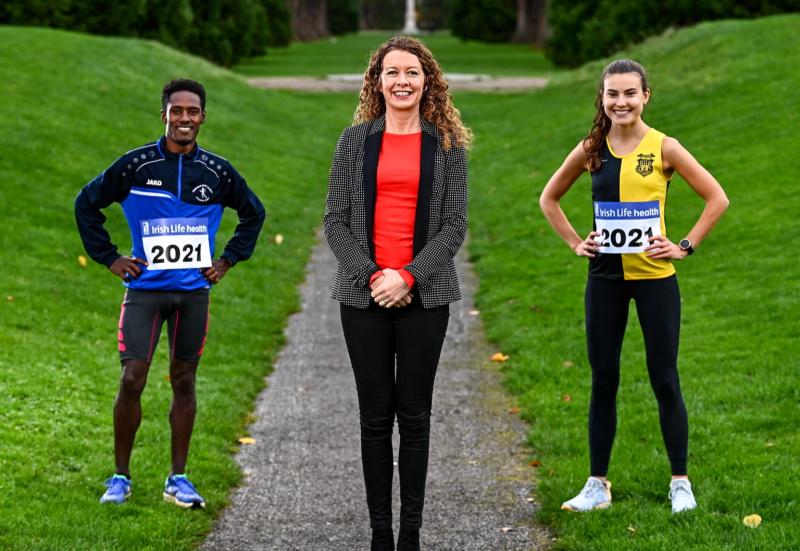 Liz Rowen, Head of Marketing of Irish Life Health, with Hiko Tonosa of Dundrum South Dublin AC and Aoibhe Richardson of Kilkenny City Harriers at the launch of the Irish cross-country championships

It promises to be a stellar weekend of athletics action as Ireland’s best cross-country runners descend upon Santry Demesne in pursuit of national glory and European selection at the Irish Life Health National Senior, Junior and Juvenile Even Age Cross Country Championships on Sunday (November 21).

Those coveted podium places will have all the more significance with the first three home in each of the senior, U23, and U20 races securing their place on the Irish team set to compete at the SPAR European Cross Country Championships at the Sport Ireland Campus on December 12th.

It looks ultra-competitive across the full schedule of competition and the 2021 edition of these championships is arguably the most open yet with a host of Olympians, national champions, and European championship medallists set to battle it out.

Aoibhe Richardson, who was part of the Irish team which secured a team silver medal at the 2019 European Cross-Country Championships was on hand to launch Sunday’s showdown. She said, “I’m really looking forward to competing at nationals having raced in the US for the last few months. This year’s Irish Life Health National Cross Country Championships are going to be more competitive than ever with places on the European Cross Country team down for decision so it should be a thrilling day of competition.”

Individual and team titles will be highly sought after, as will places on the team for Fingal-Dublin 2021. Sunday will complete a remarkable journey for Hiko Tonosa should he claim one of those podium places in the men’s senior race.

Tonosa became the first asylum seeker to win an Irish senior athletics title with victory in the National 10km road race in 2019, before receiving Irish citizenship in 2020. The DSD athlete has enjoyed a stunning 2021 season in taking both the 5,000 and 10,000 meter titles at the Irish Life Health Track and Field Championships back in June.

He said: “I have special memories from National Championships on the track and road, and I’m looking forward to the challenge on Sunday, and hopefully making all the hard work pay off by having the chance to represent Ireland in December.”