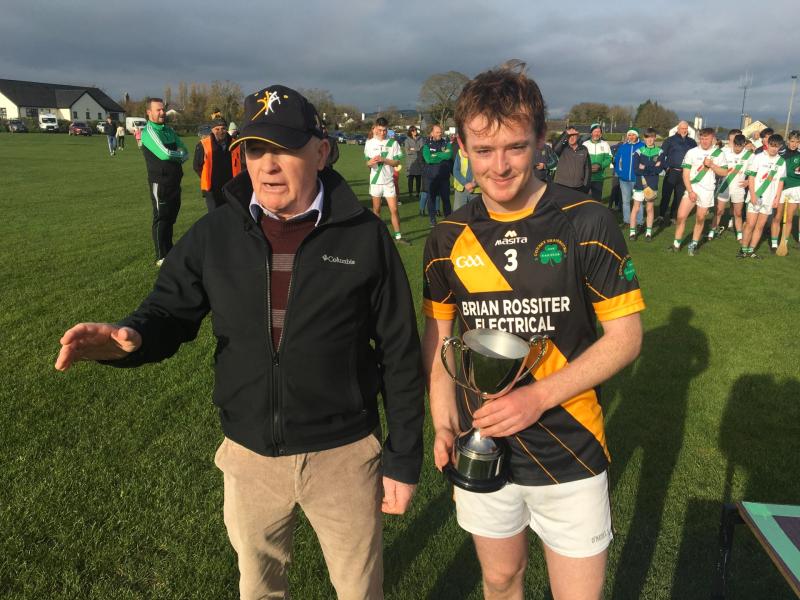 Tullaroan led Conahy Shamrocks for much of this Permanent TSB U19C Shield Final in Páirc Lachtain, Freshford, on
Saturday, but a strong closing six minutes saw Conahy gain the upper hand to record a good win.

Tullaroan had the better of the opening quarter getting the first score, a point, from Keelan Brennan. By the fifth minute
Conahy drew level through industrious midfielder Jack Murphy who was quickest to a breaking ball to score. That
point saw Conahy hit a good patch with further points from Brooklyn Synott and Robert Ring.

The play was towards the Conahy goal for the remainder of the quarter. Points from Liam Walsh and a Gearoid Dunne
free tied the game. The first goal of the game arrived on fourteen minutes when hesitant Conahy defending allowed
Gearoid Dunne to steer the ball over the line. Keelan Brennan added another Tullaroan point moments later to see his
side leading 1-4 to 0-3 at the first water-break.

Despite playing against the breeze in the opening half Conahy started the second quarter impressively with three
points from Mark Gunner, two from frees, to leave the minimum between the teams.

Tullaroan played the better hurling in the closing stages of the first half. They scored three unanswered points through
Bill Walton (2) and Gearoid Dunne to stretch the lead to four points. Robert Ring scored a fine Conahy point from an
acute angle to narrow the margin before Charlie Cleere and Bill Walton added points for Tullaroan to see them lead 1-
9 to 0-7 at the interval.

They extended that lead further on the restart when Keelan Brennan pointed, but Conahy were right back in the game
one minute later when a long delivery from Robert Ring ended up in the back of the Tullaroan net. When Mark Gunner
(free) and Harry O’Mahony added a brace of points for the winners the margin was back to the minimum.

Tullaroan put Bill Walton on free-taking duties in the third quarter and he scored a good point after fifteen minutes. He
got another from a sixty-five moments later after Oisín Cahill in the Conahy goal brought off a terrific save from Keelan
Brennan.

Another Harry O’Mahony point for Conahy Shamrocks was followed by a similar score from Bill Walton for
Tullaroan after a neat pass from Gearoid Dunne. Brooklyn Synott left a point between the sides close to the end of
normal time, but the key score of the game arrived one minute later when Billy Mulhall collected a low delivery from
Jack Murphy to score a goal.

Gearoid Dunne hit a brace of points for Tullaroan in between Ciaran Rice pointing a seventy-metre free for the
winners, but the momentum was now with Conahy Shamrocks. They finished impressively with Mark Gunner and
Harry O’Mahony hitting points to record a merited win.

Conahy’s work rate in the second half was key to their victory, but in the end Billy Mulhall’s goal proved the difference
between two evenly matched teams.