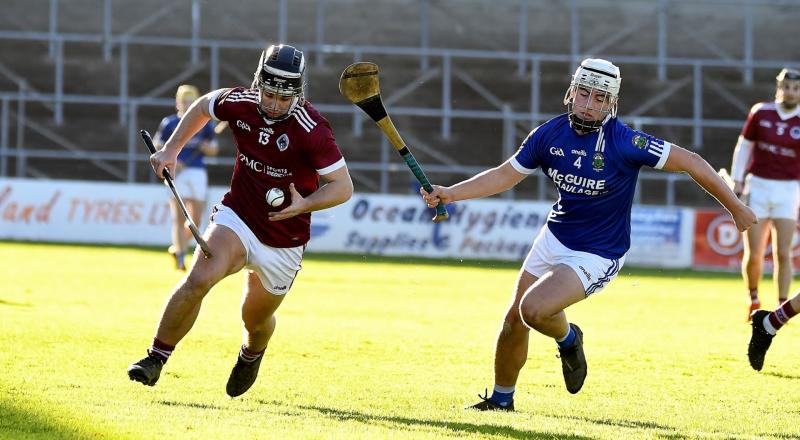 A strong finish helped the Dicksboro under-19s end their season in winning style as they got the better of a pulsating battle with Thomastown to lift the Roinn A county crown.
While the ’Boro laid down a marker early on in this exciting final, it was only after the second water break that they pulled away from their opponents at a sunny UPMC Nowlan Park.
Thomastown were first to raise the white flag in this double header at UPMC Nowlan Park with a fine point from Peter McDonald just 40 seconds after throw-in. A Harry Shine attempt in the second minute came off the posts and was well-cleared by the Thomastown goalie, Luke McNena.

However, moments later Dicksboro’s James Carroll pounced on a loose ball and found Liam Moore making a run up the middle. Moore cut through the Thomastown defence and made no mistake in finding the back of the net in the third minute. The marker was laid down!
Thomastown’s Peter McDonald, who was a workhorse throughout the 60 minutes, responded to the Dicksboro goal with two points, one from a placed ball. He scored all but one of Thomastown’s nine points in the first half.
Harry Shine put his name on the scoreboard with his first of many scores of the afternoon when he pointed from a placed ball in the sixth minute. James Carroll, working tirelessly at midfield, put over a super point from close to the sideline shortly after.
Pressure
The city side kept the pressure on with Cillian Hackett, Liam Moore and Harry Shine registering points. A goal attempt by Shine just before the water break might have put the ’Boro men two goals up but a scramble on the goal line eventually resulted in the ball being cleared away by Luke McNena.
At the first waterbreak, it was Dicksboro who led by 1-5 to Thomastown’s 0-5.
Thomastown were quick out of the blocks after the water break. A well-worked passage of play up the field involving Peter McDonald, Luke Connellan, Zach Bay Hammond and Conor Holden threatened the Dicksboro defence but they held strong and denied Thomastown a goal. It was the first of many goal attempts by the men in blue and white. Credit goes to netminder Brian Minogue for his efforts on the day.

Not long after Liam Treacy took aim at the ’Boro goal and again Minogue defended superbly. Luke McNena was also on form in the second quarter, denying Eoin Dalton and Aran Murphy goalscoring opportunities.
The first half closed out with points from Dicksboro’s Nick Doheny and Thomastown’s Luke Connellan, while Peter McDonald and Harry Shine scored two apiece from placed balls.
There was little between the sides, but Dicksboro held the upper hand on the scoreboard (1-11 to 0-9).
Harry Shine was instrumental in setting up a number of the ’Boro scores in the second half. He was liable to pop up anywhere on the field, laying off the ball to his teammates who were in better scoring positions or back defending. One such layoff to Eoin Dalton early in the second half put their side three points up.
Liam Moore again showed his might with a rasper of a strike which everyone thought would end up in the back of the net but rattled off the crossbar, the sound echoing around the stadium, much to the relief if the Thomastown supporters.
Thomastown wasted no time going on the attack and were awarded a free for their hard work. Peter McDonald stood up to take the free but struck it short to Luke Connellan, who was in a better position and Luke pointed with ease.
Harry Shine, with pin-point accuracy set up Aran Murphy Dalton and substitute Sean Maher with some fine points. A pointed free from Peter McDonald meant only the early Dicksboro goal separated the sides going into the second water break (Dicksboro 1-11, Thomastown 0-11). 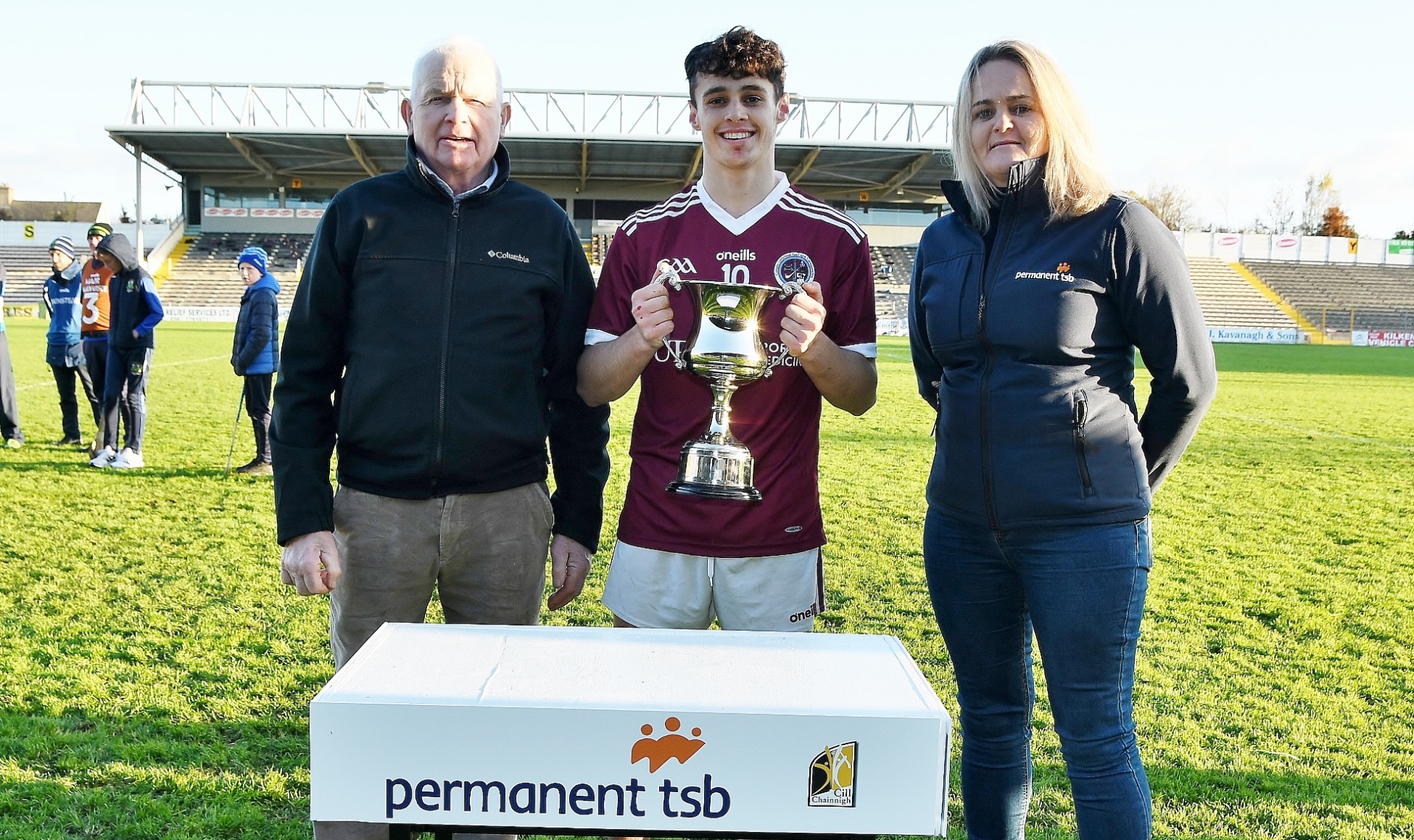 Dicksboro came out after the second water break and dominated all over the pitch. They blitzed the Thomastown defence, outscoring them 2-6 to 0-4 in the final 15 minutes.
Points from Sean Maher and Harry Shine (free) helped extend their lead out to five points before Zach Bay Hammond, escaping his marker, put over a lovely point.
From this point on, Dicksboro took a firm hold on the game. Liam Moore added to his tally with a lovely point in the 50th minute and was instrumental in captain Aran Murphy’s goal a minute later.
A long ball into Cillian Hackett in the corner was passed to Moore. Spotting the unmarked Aran Murphy off his right shoulder, Moore simply and accurately flicked the ball on with his hurl - the captain’s strike was unstoppable.
Thomastown went on the attack in the dying minutes and were awarded a free. There was no option but to go for goal and the Peter McDonald strike looked like it was heading from the back of the net, but Brian Minogue just got the tip of his hurl to it and sent it over the bar for a point instead.
The ’Boro sailed on, cementing their title when an injury-time goal from Harry Shine sealed the win for the city men.
Dicksboro: Brian Manogue; Luca Lolo, Niall Rowe, Stevie Dermody; Charlie Nolan, Timmy Clifford, Tom Carroll; James Carroll (0-2), Colm O’Hara; Aran Murphy (captain, 1-1), Liam Moore (1-2), Eoin Dalton (0-1); Harry Shine (1-6, 0-5 frees, 0-1 65), Nick Doheny (0-1), Cillian Hackett (0-1). Subs: Sean Maher (0-2), Cormac Kennedy, Mikey Raggett (0-1), Oisín Timmons.
Thomastown: Luke McNena; Oisín O’Reilly, Cian Moore, Ben Tennyson; Pauric Kirwan, Peter Connellan, Naoise Dempsey; Rory Connellan, Peter McDonald (captain, 0-12, 0-7 frees); Liam Treacy, Luke Connellan (0-2), Paddy Collins; Conor Holden, Zach Bay Hammond (0-1), Sean O’Keeffe. Subs: Alex Cass, Conor O’Neill.
Referee: Paul Cahill (Dunnamaggin)