Kilkenny's Dara Keane celebrates his equaliser for UCD in their promotion/relegation playoff with Waterford at Richmond Park PICTURE: Stephen McCarthy/Sportsfile

A top class performances from two Kilkenny students saw UCD earn their place in the Airtricity League's Premier Division for next season.

Dara Keane and Colm Whelan were on target as the College sent a freefalling Waterford spiralling into the First Division in their promotion/relegation playoff at Richmond Park.

Waterford, who sacked manager Marc Bircham in the build-up to the game, made a bright start. A long Jack Stafford throw was headed on by Paulstown's John Martin to Anthony Wordswort, who hit the net to give the Blues the lead.

UCD stuck to their game plan and began to grow into the game with their first foray forward on the 15-minute mark. PFAI First Division Player of the Year nominees Colm Whelan and Liam Kerrigan linked up well but the final cross from Kerrigan went harmlessly out for a throw-in.

UCD rallied, forcing their way back on to level terms through Dara Keane on 26 minutes. The former Evergreen player popped up at the back post to add the finishing touch to a Liam Kerrigan cross. 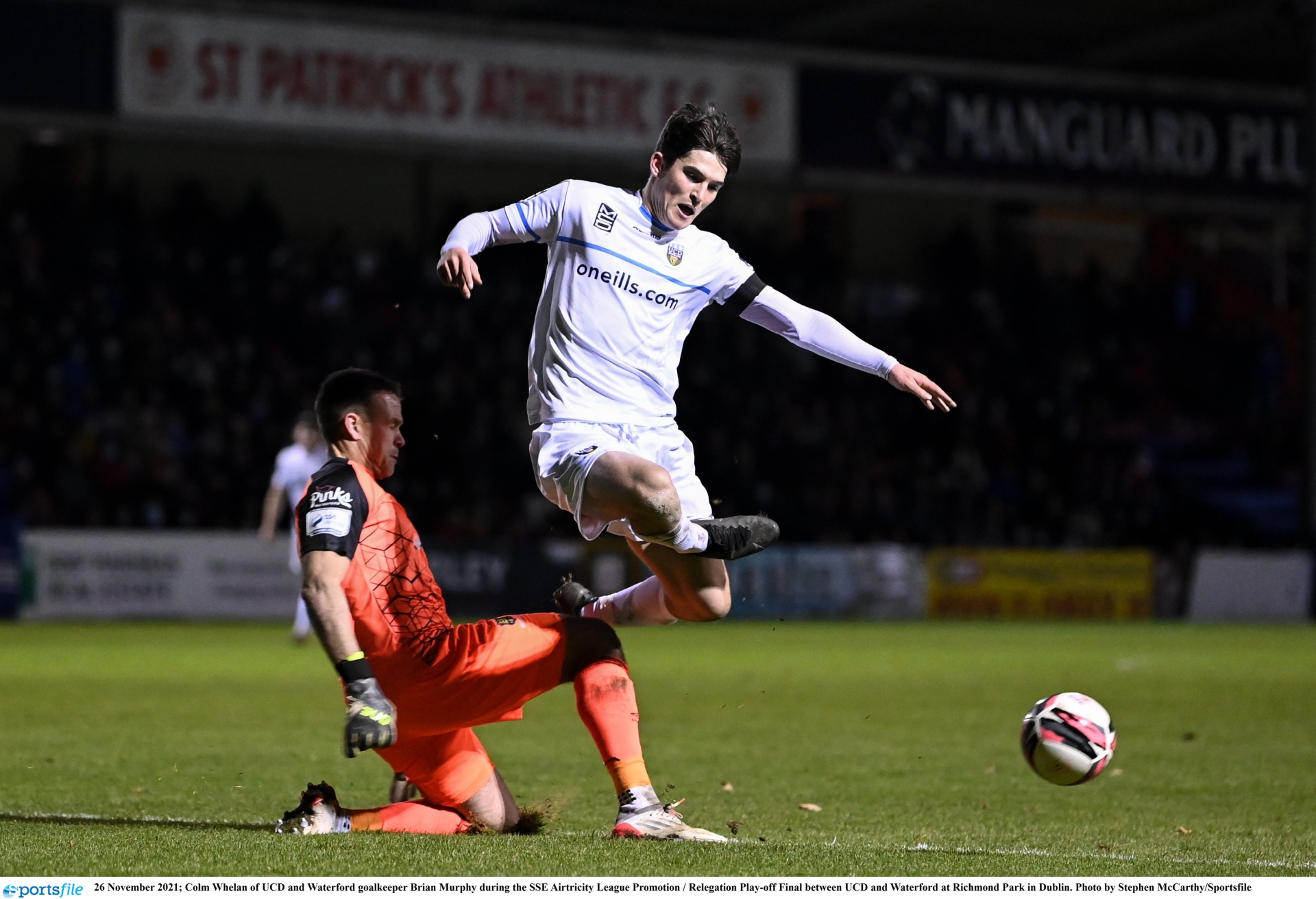 UCD were on the front foot, and went ahead when the two Kilkennymen combined for what proved to be the winner 10 minutes before half-time. Dara Keane then went from goal scorer to provider on the 33rd minute. The midfielder was persistent in his harrying of the Waterford defence, winning the ball back on the end line before playing it into the six-yard box where Colm Whelan was on hand to apply the finishing touch. It was his 27th goal of the season in all competitions - and most important.

The Students started the second-half the brighter with Paul Doyle feeding a through ball to Colm Whelan but Brian Murphy sprung off his line to challenge the frontman and keep the deficit to a solitary goal.

Both sides had chances from set-pieces with UCD going closest to doubling their lead when a Paul Doyle corner was kept alive by Jack Keaney and Sam Todd managed to get a shot off but was denied by the woodwork.

Waterford failed to make the most of wide free-kicks with UCD goalkeeper Lorcan Healy rarely tested.

Waterford were reduced to 10-men with UCD breaking at pace with half-time substitute bringing down the onrushing Kerrigan as the game entered the final five-minutes.

The Blues went direct in their approach but the UCD defence marshalled by captain Jack Keaney remained composed, holding out for the victory and promotion back to the Premier Division at the second time attempt.

For Waterford, they return to the First Division following a three years in the top flight.