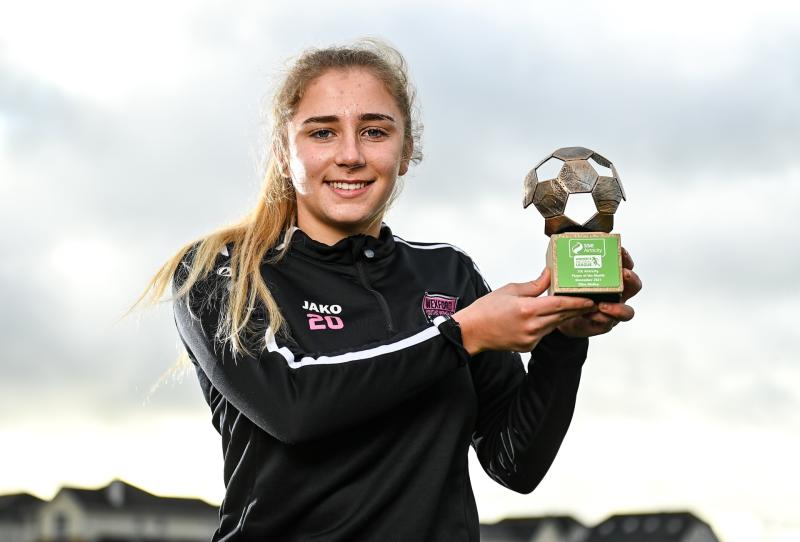 After the outstanding season that she has had Ellen Molloy should be putting her feet up. Instead the Inistioge girl is burying her head in the books with her Leaving Cert exams fast approaching.

The 17-year-old has been able to balance school work with football to such a degree that she makes it look easy. That is why she has been named as SSE Airtricity Women's National League Player of the Month for November 2021.

Molloy was simply superb in the run-in to a thrilling season as Wexford finished third in League and lifted the EVOKE.ie FAI Women's Cup - where Molloy produced a Player of the Match performance.

The Kilkenny native scored 14 League goals and was instrumental in Wexford being in the hunt for silverware. While slightly embarrassed at picking up an individual award, she is glad to have played such a positive part in her team's success.

"It was a great season, especially capping it off with the Cup. I think we were a bit disappointed that we didn't challenge for the title a bit more towards the end but a great season overall," said Molloy.

Leanne Sheill, SSE Marketing Manager, said: "Congratulations to Ellen Molloy on being named the SSE Airtricity Women’s National League Player of the Month for November. It was amazing to see her natural ability and fantastic performances throughout the season and particularly during November. Ellen’s importance to Wexford Youths at just 17 years of age is clear to see and incredibly impressive. We can’t wait to see how Ellen’s career progresses into the future.

"Our first season of sponsoring the Women’s National League has been brilliant. The quality and excitement throughout was of the highest standard. We are excited to continue this sponsorship into next year as we continue to make efforts to increase awareness, importance and participation of the women’s football in Ireland."

Molloy finished ahead of club-mate Kylie Murphy and Shelbourne midfielder Ciara Grant in the voting.