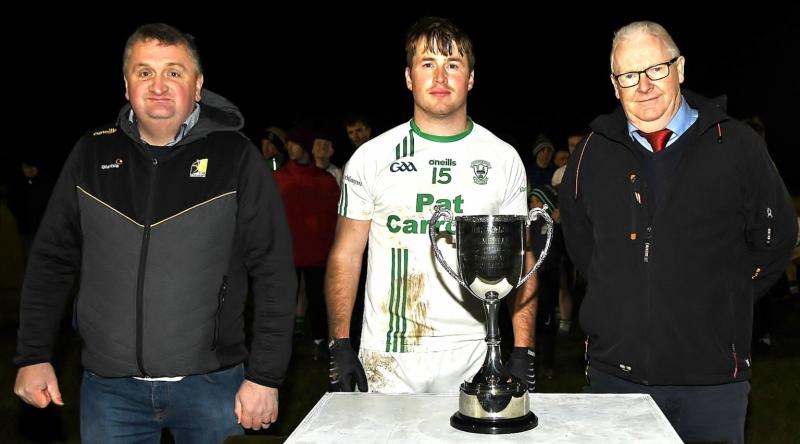 The Kilkenny Intermediate Hurling champions opted to rest a few players with their Leinster Intermediate Club Championship game against Naas scheduled to be played shortly. Shane Murphy started at centre half back for the Southerners, but he did not appear for the second half, another precautionary move by the Glenmore mentors.

Whatever this game may have lacked in footballing finesse, the players on both teams made up for it with hugely honest endeavour over the sixty minutes. From start to finish both sides were intent on moving the ball at pace and with a good attitude from the players there was never more than a couple of points between the sides, except towards the finish when Huw Lawlor scored his side’s third goal.

The excellent Paul Phelan was first to score when he pointed for Glenmore after good approach play from Richie Hennessey. Two points from Sammy Johnson, one from a free, edged O’Loughlin Gaels ahead on ten minutes.

The city side were dominant at this stage and they stretched their lead when Eddie Kearns finished the ball to the Glenmore net after a high delivery was broken down by Tony Forristal.

Pointed frees from Sammy Johnson (OLG) and Paul Phelan (Glenmore) saw the winners leading 1-3 to 0-2 at the first water-break.

Glenmore controlled the third quarter with points from Emmett Vereker and a Paul Phelan free to close the margin to two points. It got better for the Southerners close to the interval when they were awarded a penalty which Paul Phelan finished impressively to see his side leaving 1-4 to 1-3 at half time. That penalty incident saw a O’Loughlin Gaels player black carded.

Five minutes into the new half the O’Loughlin Gaels second goal arrived. When a Glenmore attack broke down in midfield, Jordan Molloy won the ball and he set off on a fifty metre run at pace. He spotted his colleague Tony Forristal close to goal and he made no mistake finishing to the Glenmore net when he received Molloy’s pass.

Paul Phelan was continuing to take the game to the winners and he had willing help from Richie Hennessy, Cathal Beirne and Sean Duggan. Glenmore almost grabbed a second goal nine minutes into the second half, but a rasping shot from Mark Aylward was brilliantly saved at the expense of a forty-five by Vincent O’Grady in the O’Loughlin Gaels goal. The Southerners had the margin back to two points by the second water-break and it was a one point game when Paul Phelan pointed another free.

They would have added to their tally, but some wayward shooting was proving costly. A strong closing ten minutes saw the winners take control of the game. Points from Jordan Molloy, after another great run, and Sammy Johnson (free) left three points between the sides with time almost up. Glenmore then lost Darragh Hartley to a black card.

The cup was finally destined for St. John’s Park when Huw Lawlor scored his side’s third goal after another good run in the last minute to see O’Loughlin Gaels run out deserving winners.