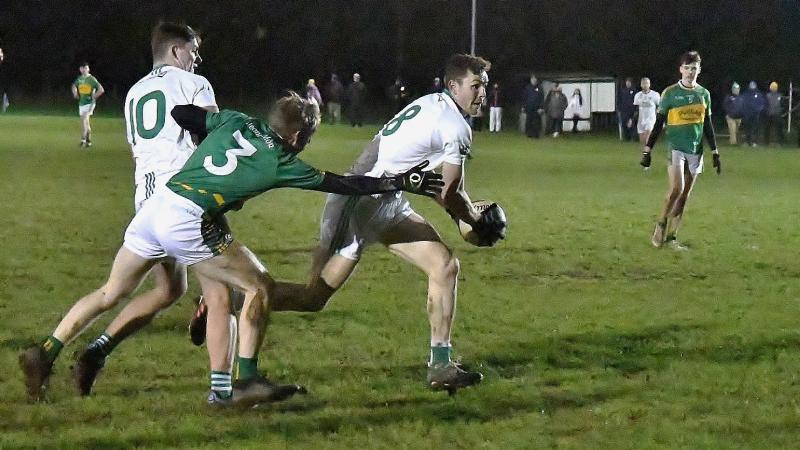 O’Loughlin Gaels narrowly came out on top of a real tug-of-war after 80 minutes in the AIB Leinster Club Junior Football Championship in New Ross on Saturday afternoon.

With conditions far from ideal, as cold wind swept across a damp, energy sapping pitch, the Kilkenny outfit proved to have just a little more staying power than their opponents as they booked their place in the semi-final.

Playing with a substantial crossfield wind in the opening half, Clongeen looked nervy coming out of the blocks.

Indeed, after a quarter largely dominated by the visitors, the scoreline was level (0-2 to 0-2) with two Sammy Johnston free’s being negated by Shane Cahill and Adam O’Sullivan minors.

With O’Sullivan’s point seemingly settling the nerves for Clongeen, they kicked on and scored five unanswered. Adam Ryan, Daryl Murphy and Cahill were the sharpshooters as they opened up a five point lead - an unimaginable scenario just 15 minutes earlier.

A considerable turning point came deep into first half injury time, after Johnston had stopped the rot for O’Loughlin Gaels with another free, Tom Donovan picked up a needless second yellow card to put Clongeen a man down.

Cian Loy reduced the deficit to three in the 38th minute before the post was once again rattled by Robbie Buckley, only this time Loy was first to react and turn the ball into the net to level the game.

Johnston soon had the Gaels in front but just when it looked as if they would canter home, a man up with strong wind at their backs, Clongeen dug in.

The result was 15 scoreless minutes, before Páraic Cullen popped up in the 60th minute to send the game into extra-time.

Now momentum looked as if it would shift back in Clongeen’s favour. With Cathal Murphy introduced to even up the numbers, they went ahead through Cahill.

It was now time for the Gaels to dig in and they did so accordingly – Johnston scored two free’s to stick to their noses in front at the mini-break.

Cullen levelled the game again immediately after the restart but that would be the final score for the Wexford men.

Two more well taken frees by Johnston took his tally to eight and his side two points ahead.

A spell of Clongeen pressure followed before a quick counter-attack ended in Jamie Young firing over the bar and all but securing O’Loughlin Gaels passage into the next round.