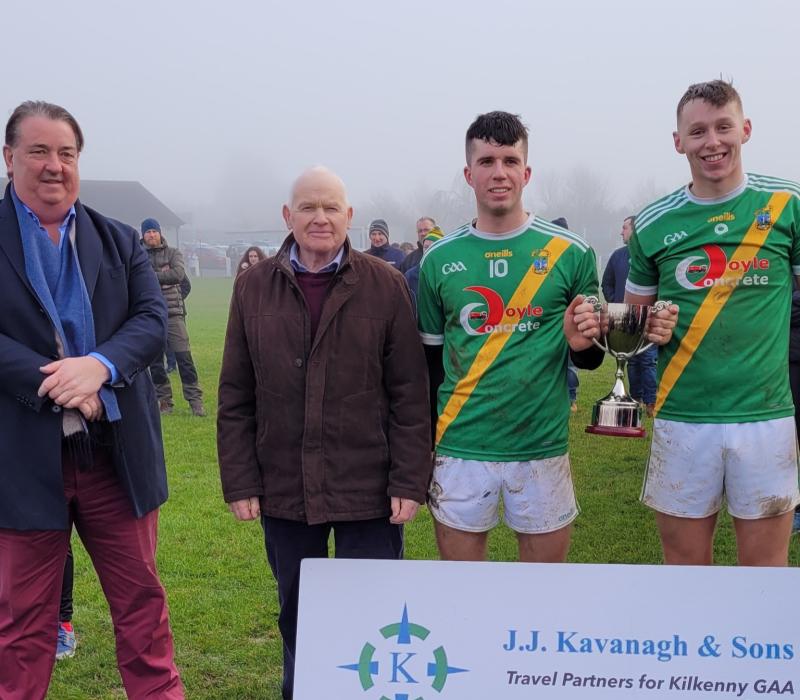 With no under-21 championships having been played in 2020, the form guide for this year’s competitions was always going to be difficult to put together.

However, based on the earlier rounds of this Roinn D Championship, the crowd in Danesfort on this foggiest of days had reason to expect a close run encounter.

The first 10 minutes didn’t really hint at what was to come. Carrickshock were 0-2 to 0-1 ahead by then but when Eoghan O’Neill, coming out the field from his full-forward position, sent over the first score from play, and followed it up with a perfect lay-off for Barry Lennon to blast to the net, there was suddenly a five point gap.

Shortly afterwards Sean Moore made one of his trademark forays into the opposition half to keep up the momentum.

After the water break Chris Grace dispelled any notion of a quick St Patrick’s turnaround. He was first to pounce on a second ball from a long range sideline to stretch the lead to 10 points.

When a Jack Morrissey free soon after came off the upright, it summed up a frustrating St Patrick’s first half. And Carrickshock were punishing every mistake.

Eoghan O’Neill pointed a difficult free a minute later before finishing the half with two fine points from play. A half-time deficit of 2-8 to 0-1 left St Patrick’s with a mountain to climb in the second half and they really needed to get some quick scores on the board.

Carrickshock did waste a couple of early opportunities, but with Michael Murphy dropping back to help the defence, Padraig Lennon and Oisin Carroll expertly marshalling the central positions, nothing was getting through at the other end. When Barry Lennon fired over the opening score of the half for the ’Shocks it kept them firmly in the driving seat.

It took until the 10th minute of the half for the hard-working Robbie Doheny to score St Patrick’s first from play, but with the score now reading 2-9 to 0-2, and 20 minutes remaining, it was a case of too little too late. To compound matters, losing centre back Ned Glennon to injury soon after really killed the game as a contest.

Carrickshock continued to keep up the work rate and runs off the shoulder, best exemplified by a neat passing move between Jake O’Dwyer and young Joseph Aylward, which the latter finished with a splendid point.

Cian and Robbie Doheny did their best to try and get St Patrick’s back into it, and Christian McInerney did his best to shore up a defence minus their starting centre-back, but the scores kept coming at the other end.

The final scoreline of 2-17 to 0-4 told its own story. Credit must be given to referee Stephen Delaney and his team of officials must be commended on their officiating.

Allowing for the extremely heavy fog throughout, he used a common sense approach to keep the game flowing with the minimum of fuss and very little complaint from either side.

For St Patrick’s, perhaps the loss of a number of key players to injury, and a couple more just on their way back from illness, meant that this was a bridge too far for them this year. But it must be said that this was a very impressive display by Carrickshock to round off the year.