St Martin’s on top in Under-15 football final 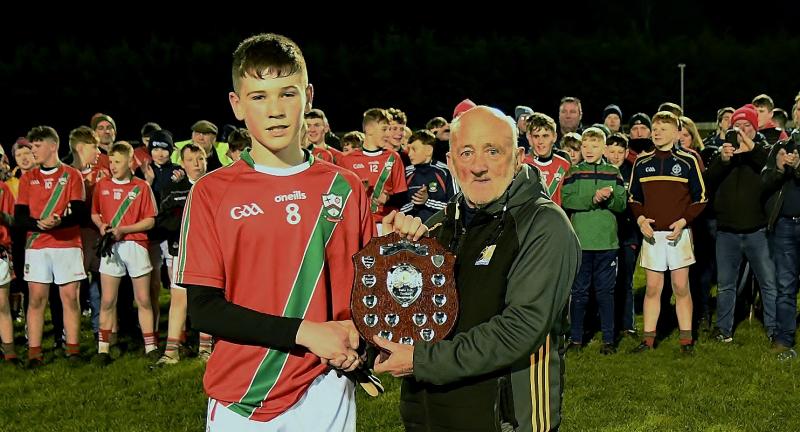 St Martin’s landed their first Duggan Steel under-15 Roinn B Football title since 2000 when they saw off Young Irelands (Gowran) in a well contested final played under lights in Muckalee.

The opening exchanges were frantic with Michael Ruane converting a placed ball to put the home side ahead before Thomas Langton responded with a fine point.

Michael Keane and Jim Conlon swapped points before a searing solo run from Colin Hayes had the saints back in front.

James O’Neill landed a cracker of a goal. Feeding off a Aaron Farrell break, the dynamic full-forward cracked the ball home off his weaker foot.

In the twinkling of an eye Cian Phelan had the green flag waving down the other end after Jake Byrne codded the St Martin’s defence creating a huge amount of space for the centre forward to goal to leave it 1-3 to 1-2 at the water break.

The exchanges in the third quarter were even but the Saints’ eye for goal was in with Adam Morrissey and Ruane pointing before Ewan Buggy got on the end of a Hayes delivery and duly sent the green flag waving.

Kieran Timmins responded with a fine point but Martin’s struck just at the death of normal time with a vital goal as O’Neill fed off a pass from Farrell after neat work from Tadgh Power which saw the full-forward slam the ball into the bottom corner to leave the home side 3-5 to 1-2 up.

Straight from the off Ruane increased the lead with a converted free, but the men clad in white and red tore into their opponents. They played some gifted football over the next 15 minutes, with a point from Mikey Keating and a cracking goal from Byrne the minimum they deserved for all the pressure they exerted.

However, O’Neill settled the young Saints’ nerves when he plundered a fourth goal to leave it 4-6 to 2-4 at the third water break.

Again Young Irelands’ owned the ball but only had a Shane Simpson point for their efforts as custodian Luke Cahill twice thwarted their efforts with two superb saves. O’Neill and Ruane tacked on points in the dying embers of the game.

There was great delight at the final whistle amongst the large crowd as captain Aaron Farrell lifted the cup.

It was a real team performance from the St Martin’s men who had to withstand large periods of Gowran pressure.