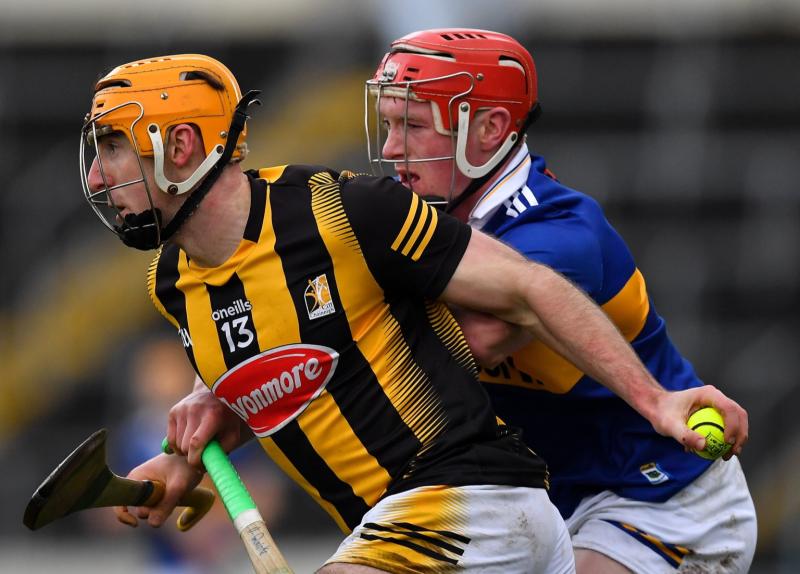 Billy Ryan is tackled by Dillon Quirke during this afternoon's NHL Division 1B clash between Kilkenny and Tipperary. Pic: Brendan Moran/Sportsfile

A late Jason Forde free gave Tipperary a 1-19 to 1-18 victory over Kilkenny in the second round of the Allianz National Hurling League in FBD Semple Stadium this evening.

The game took it’s time to come to life but when it did in the final quarter, it was nip and tuck all the way until Paddy Deegan hit a sideline cut wide of the goal.

Kilkenny were slow out of the traps and like in the victory over Antrim a week previous, they were careless in front of goal as they hit nine wides in the opening period.

It was a first half full of mistakes by both sides but Tipperary looked in total control by the half hour mark as they led 0-10 to 0-4.

Kilkenny rallied before half-time though and four points on the bounce from Padraig Walsh, Tom Phelan and John Donnelly x2 got the margin back to two.

A misdirected puckout from Eoin Murphy allowed Tipperary corner forward Jake Morris to goal before the change of ends and with Barry Heffernan also knocking over a point near the sideline, Colm Bonnar’s side led 1-11 to 0-8.

Kilkenny had the aid of a strong breeze in the second period and the Cats were much improved and Tom Phelan almost goaled within seconds of the restart.

A Jason Forde free and a Jake Morris effort from play were the home side’s only scores until the 52nd minute while Donnelly, Martin Brassil, Cian Kenny, Paddy Deegan, Martin Keoghan, and Padraig Walsh all found the target as Kilkenny levelled up proceedings for the first time.

The introduction of Tipperary captain Ronan Maher stalled the Kilkenny momentum and cheered on by a big home attendance he knocked over a fantastic score within minutes of appearing as a sub.

Forde then knocked over three points on the spin for Tipp and they led 1-17 to 0-15 with only ten minutes remaining on the clock.

Kilkenny showed serious battling qualities in the final few minutes and helped by a goal from James Stephens clubman Tadhg O’Dwyer they got the sense that a victory over their arch rivals was on.

A well taken 63rd minute point from Jason Forde help maintain the Tipperary advantage but when Walter Walsh replied with successive points, it was 1-18 apiece as the game entered stoppage time.

Kilkenny were heroic at the back in the second half and Huw Lawlor produced a stunning block from a goalbound effort by Seamus Callanan that further illustrated this.

Tipperary still found a way to secure the points though when Jason Forde scored his tenth point of the afternoon in the 71st minute.

Kilkenny had a couple of late chances to grab a share of the points including a Paddy Deegan sideline cut but none went their way as Tipperary made it two wins from two in the league.

Kilkenny will look to get back on track when they face Laois at home in two weeks time.