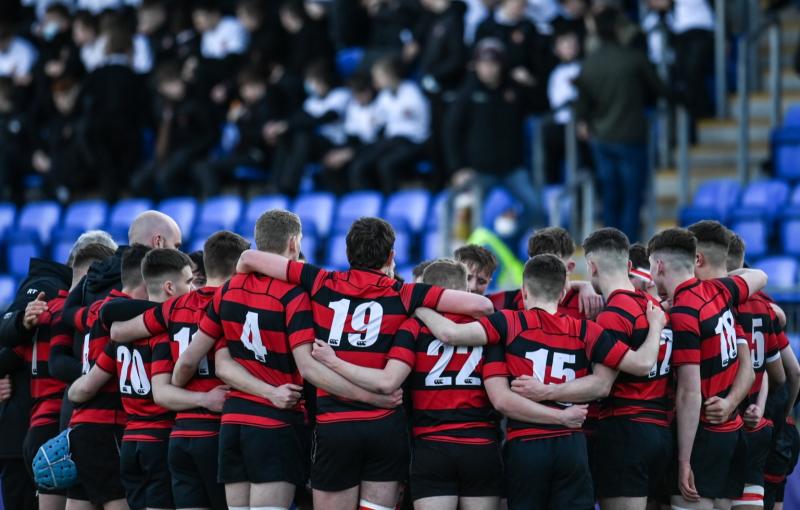 Kilkenny College were on top from start to finish against Pres Bray in the Bank of Ireland Leinster Schools Senior Cup first round at Energia Park.

In the build-up, the Ireland Schools out-halves Jack Murphy and Sean Naughton were set to have a fascinating face-off. That never materialised as the Kilkenny forwards took matters into their own hands.

From the moment a pre-planned Pres move went to ground, Kilkenny’s Glenn O’Rourke broke away until wing Joshua Kenny tracked down the centre.

Pres committed an indiscretion in desperation and Naughton kicked the opening points from the right in the fourth minute.

Murphy’s restart was taken in by Stephen Smyth only for flanker Sam Nolan to force a penalty on the floor, Murphy levelling it from the right.

It was cagey, Kilkenny trucking it up with forwards Adam Shirley, Adam Watchorn and Smith on the ball, while Murphy looked to play to centre Finn Treacy on the edges.

When Kilkenny’s Stefan Hillebrand escaped up the left, his kick bounced awkwardly.

Captain Harry Rogers looked to be in front of the hack ahead on the way to touching down for Naughton to make it 10-3 in the 16th minute.

The ball was proving elusive, Kilkenny wing Dean Symes a fingertip away from getting away before Naughton’s sky-high kick yielded a penalty which Naughton struck for 13-3 in the 22nd minute.

Pres were falling into the trap of doing something well, like Flyn Pyper fielding a kick in traffic, only to undo it, by a side entry into the ruck.

Kilkenny’s confidence was rising, Ashton Botha, Watchorn and Smith involved in putting Hillebrand away until Kenny completed a cracking tackle.

The Bray school needed to take a foothold, their flanker Nolan pinching a penalty which Mark Stanley nullified by stealing a lineout.

The set-piece was not producing the necessary ball for Pres and an indiscretion at the ruck allowed Naughton to give Kilkenny a lineout on the 22.

Captain Rogers powered up the guts of the Pres defence before replacement William Seymour won a turnover.

Another Stanley steal at the lineout enabled Kilkenny’s big boys to threaten, Pres No 8 Eoin Kelly stopping Paddy Bramley in his tracks.

When Naughton rifled a crossfield kick, Pres wing Luke Devitt stayed disciplined under pressure from Symes and countered up the left in impressive fashion.

It was Pres’ best moment in a half that was dominated by Kilkenny’s power against the superior ruck work of the boys from Bray.

On resumption, the Wicklow school looked to be sharper onto the ball, Devitt released to have a go up the left.

However, a rampaging attack prompted by Naughton’s bomb and Watchorn’s leg-pumping drive almost created a try for Hillebrand, who was held up by Dylan Henry.

Centre Seymour was binned for a high tackle on O’Rourke and Kilkenny were one pass away from putting the game to bed, the ball not finding Symes on the right.

The long stretches in command for Kilkenny were eating into the clock as well as Pres’ chance to play their way into the game.

Replacement Henry was being kept busy in defence, shutting down the latest attack for the concession of a lineout.

It was all Kilkenny, Kelly hauling down Naughton with an arm around the neck.

The lineout to Smyth was taken over by the outstanding lock Stanley for Naughton’s conversion to make it 20-3 in the 47th minute, just as Seymour returned to the fray.

There was something of a lifeline for Pres when Andrew Moore was binned for getting his timing wrong in an aerial contest.

Unfortunately, Pres couldn’t claim a lineout, leaving the ever-dangerous Kenny to beat two tacklers from the back.

The execution in attack was just not there as Kilkenny put the pressure on ball handlers for Naughton to add another three points in the 55th minute.

Suddenly, Pres erupted, Treacy and Kenny leading a lightning attack in which Billy Corrigan crashed over from close range, Murphy converting in the 59th minute.

All of a sudden, Treacy, Henry and Devitt were looking to get in behind Kilkenny, alas, to no avail. It was too little, too late.