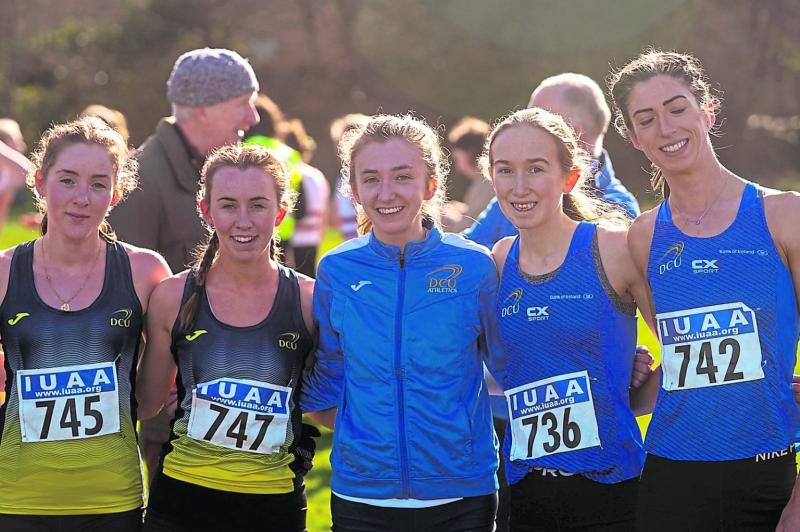 The race was held in glorious conditions with the strong spring sun providing a welcome escape from the storms of recent weeks. Sixty athletes lined up for the start of the 5km race with the holders from the 2021 event, UCD, starting without their leading woman Sarah Healy. She is focused on the upcoming World Indoors in Serbia later this month, where she has qualified for the 1,500m.

For the first kilometre the pace was steady, ensuring a large group of athletes were running together. Trinity College were in form and the DCU girls tried to stay together in an effort to make a bid of the team title. Kildare athlete, Aoife Ó Cuill, along with her fellow DCU athletes including Ruth Kennedy were amongst those in the leading group. So too was Ella Richardson, competing for the University of Limerick.

As Ó Cuill pushed the pace along a little, half way through the 2km lap, athletes dropped back from the leading group. Kennedy was a little adrift of the main group at first.

With 2km to go Ó Cuill started to pull away from the group of athletes. Celiene Gavin (Trinity) tried to come back but she was no match.

Behind the front two athletes were stringing out, forming a train behind. Ruth Kennedy, Niamh Staunton (UCD) and Ella Richardson were just off the top 10, battling for each place. Aoife Ó Cuill crossed the finish line in first place with a comfortable margin of 15 seconds to spare over the Trinity College athlete.

Down the field, Ruth Kennedy finished in 13th place with Ella Richardson 12 seconds behind in 14th position. Kennedy was the third scorer on the DCU team that finished in 2nd.

The men’s 8km race was also without one of the favourites as UCD’s Darragh McIlhenny has also qualified for the World Indoor Championships in Serbia. This left the race open for his European silver medal winning team mate Keelin Kilrehill (DCU) to seek victory.

Kilrehill, who was sixth in the recent under-23 European Championships, spent January training at altitude in Kenya with McIlhenny and was in excellent racing form. However, he did have to content with Alberto Mondazzi, the UCD International Business Management student and Italian under-23 5,000m champion. 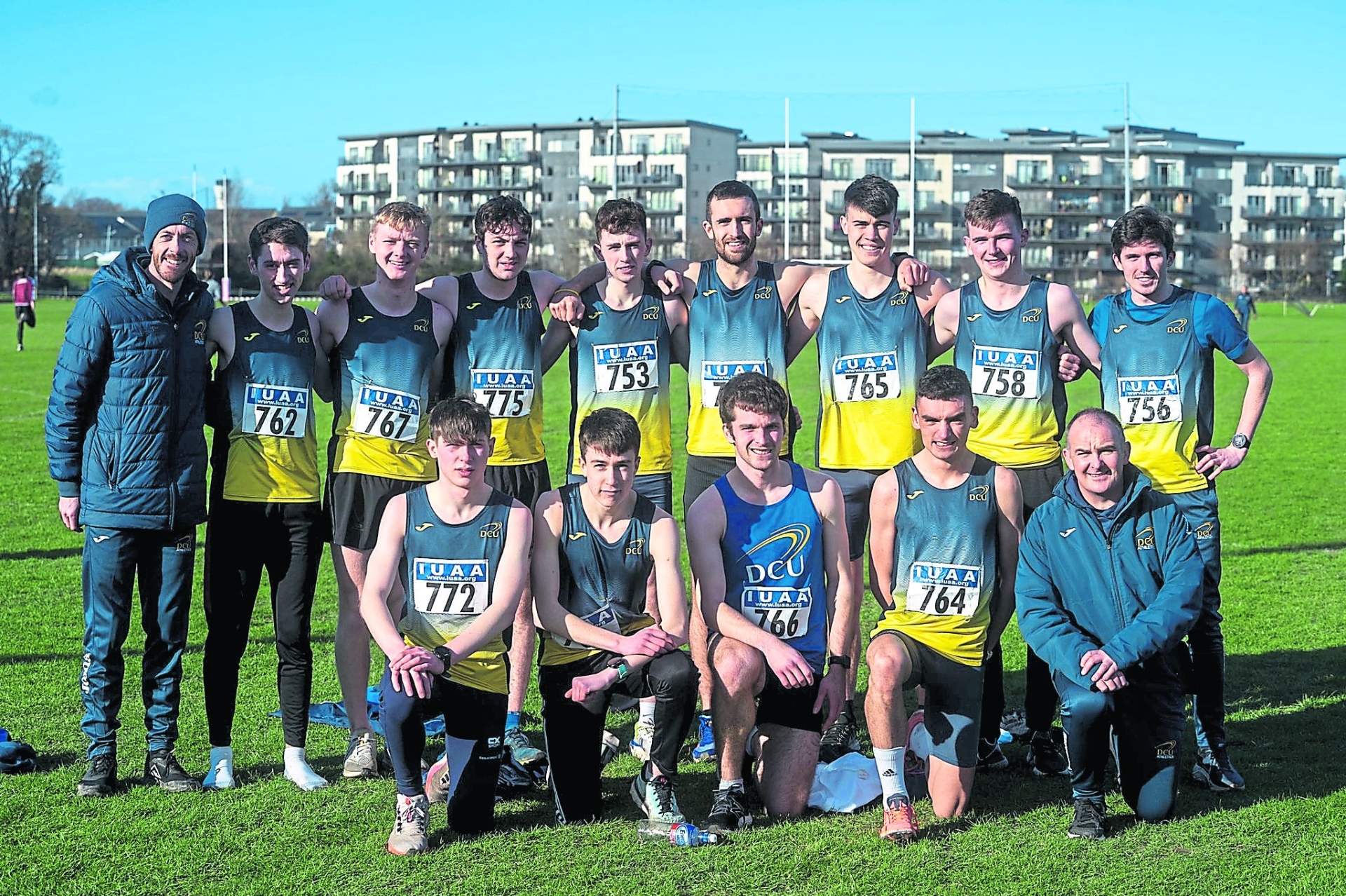 With UCD looking to retain its title, Mondazzi was a man on a mission. Kilrehill was however backed by a very strong DCU team which included KCH athlete Cathal O’Reilly. Kilrehill did emerge victorious with one second to spare over Mondazzi. He led the DCU team to victory, with O’Reilly finishing 34th, the third scorer on the team.

The finish capped what has been a fantastic cross-country season for the Kilkennyman, who made two international appearances including a silver medal winning junior team performance at the European Cross-Country in Dublin.

On the back of the success of the mixed relays at the Olympics and recent European Championships, the IUAA decided to trial the event this year. 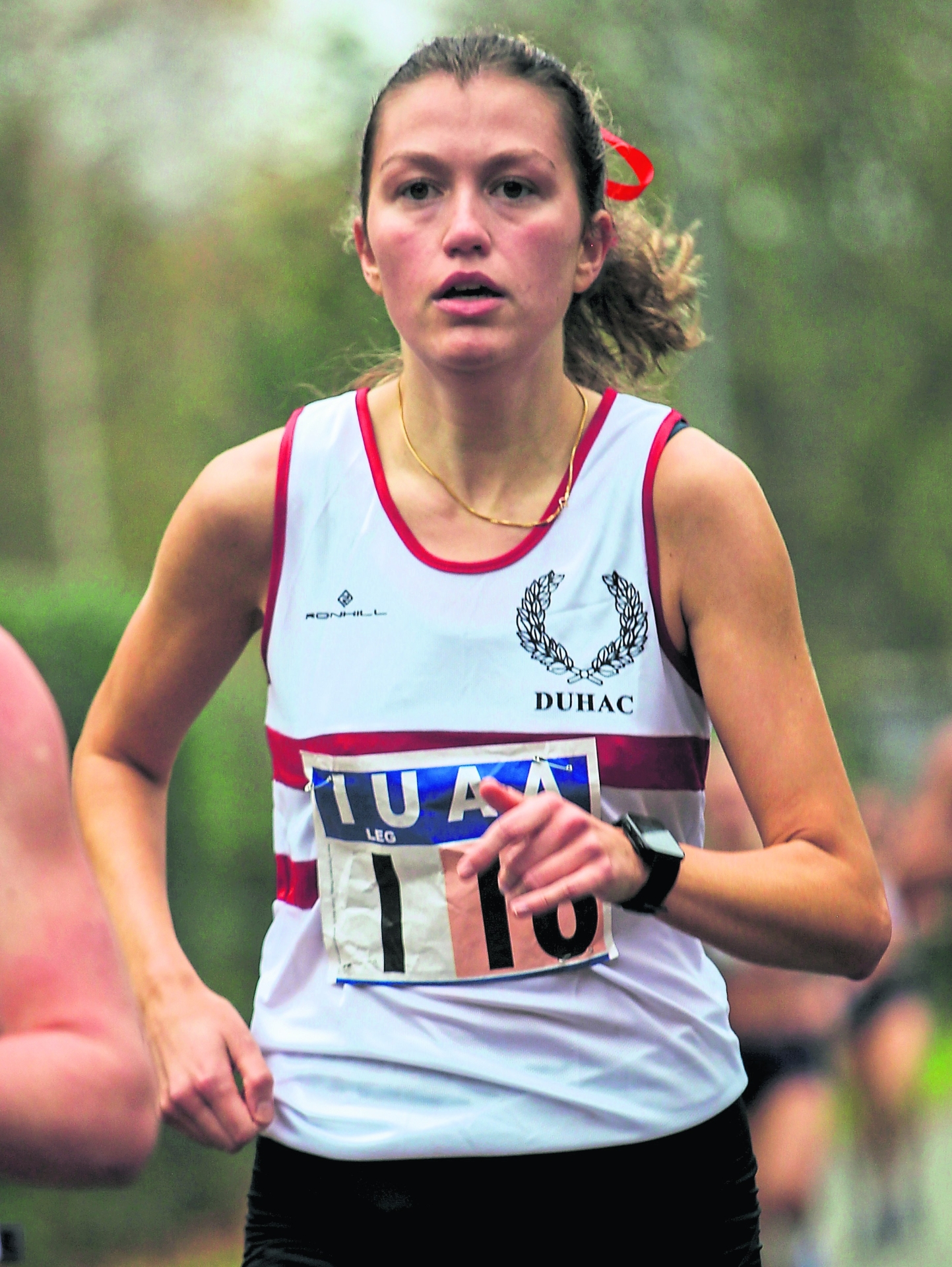 Sophie Jackman ran for Trinity College in the mixed relay

Trinity College had a strong team and had Sophie Jackman running the final leg. Trinity and DCU were neck and neck in this race, with Jackman against Nadia Power in the final leg. DCU beat Trinity by the smallest of margins for this inaugural event.

At the American Track League Aoibhe Richardson made her first track appearance of the year in an invitational 3,000m race.

Aoibhe completed the race in 9.22.50. Finn Valley’s Roisin Flanagan was second in 9.07.10 which is a new personal best for her.