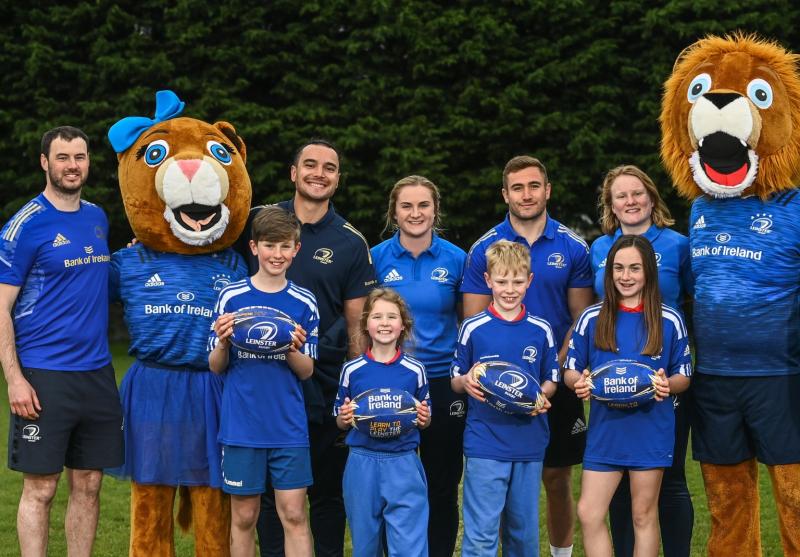 The summer camps are open to boys and girls aged six to 12. All of the camps are run by fully accredited IRFU coaches, while each camp runs from Monday to Friday and from 9.30am to 1pm.

The summer camps, which will take place in 29 different locations all across the province in July and August, offering children the chance to learn to play the Leinster way while having plenty of fun!

Leinster Rugby players James Lowe, Jordan Larmour, Ali Coleman and Aoife Wafer were joined at the launch by Leo and Leona, the Leinster Rugby mascots, and kids from St Mary’s NS, who all hope to emulate their rugby heroes someday.

Speaking at the launch, Rory Carty, Bank of Ireland’s Head of Youth Banking said: “The grassroots of the game are extremely important, which is why we are once again delighted to sponsor the Bank of Ireland Leinster Rugby Summer Camps.

"The development of young players is vital to the success of any sporting organisation, and Leinster Rugby’s progress over the past number of years has been boosted by the continuous introduction of young talent through the Player Development pathways. The Bank of Ireland Leinster Rugby Summer Camps are a fantastic place to start for young players who one day might make it to the very top of the game.”

Ray McCabe, Leinster Rugby Summer Camp Co-ordinator, added: “We’re thrilled to have Bank of Ireland on board again as the title sponsor of our Leinster Rugby camps and are excited to get our new inclusion camps underway.

“This is a brilliant addition and adds to the work already being done in clubs all over the province to get more and more children with special needs involved with the game.

“Last year saw us have our biggest number of kids attend camps across the 12 counties. With rugby back on the summer menu for 2022, we once again look forward to giving as many kids as possible the chance to get into their local clubs and once again have a great fun-filled week, while still challenging these players to improve their skills and hopefully see them in the blue of Leinster one day."

As well as learning to play the Leinster way, making new friends and having lots of fun, each child will also receive a pack including an adidas training t-shirt, a Rhino rugby ball and a boot bag. They will also get one free ticket to a selected Leinster game.

An early bird rate of €80 is available for children who enrol before 15 April. After this date, the cost of attending the camp will be €90 per child.