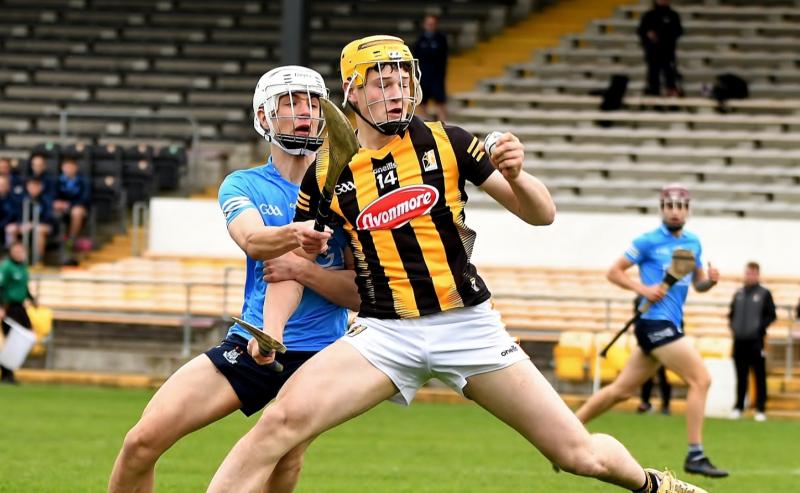 The game may have ended in defeat, but there was a positive finish to the afternoon as the Kilkenny minor hurlers grabbed a place in the semi-finals of the Leinster championship.

The competitiveness of this year’s championship was highlighted by the fact the Cats, Saturday’s opponents Dublin and Wexford all ended their Tier One campaigns with one win and one loss apiece. However, a last-gasp goal saw Niall Bergin’s side edge the Model County out on scoring difference.

Fresh from their win in Enniscorthy Kilkenny hit the ground running at UPMC Nowlan Park, jumping in front thanks to points from Jeff Neary and Aaron McEvoy (65), but the young Dubs quickly responded with a brace of points from the impressive Ollie Gaffney (free) and Tomás Moore.

Kilkenny’s placing of Greg Kelly at midfield for this game was rewarded with the young O’Loughlin Gaels player have a fine game and he got on the scoreboard with a 65 point on six minutes.

The game’s first goal came three minutes later and there will not be a better green flag raised at the home of Kilkenny hurling this year.

Dublin appeared to have dealt well with a long-range Eoin Lyng free, but the clearance was whipped spectacularly to the Dublin net by Anthony Ireland-Wall with a sweet ground stroke.

The excitement from the big Kilkenny following had barely died down when Dublin attacked from the puck-out.

Ollie Gaffney gained possession and he laid the ball off to David Purcell who finished impressively to the Kilkenny net.

Dublin immediately won the Kilkenny puck out with midfielder Sam Lewis pointing to tie the game.

Kilkenny edged three points ahead with a brace from Aaron McEvoy and another from Marty Murphy, but Dublin were always able to respond.

Their wing back Cian Moran’s long-distance free-taking was key for the Metropolitans all through the game.

Kilkenny built some momentum early on the resumption with a brace of pointed frees from Aaron McEvoy and another from Marty Murphy to see the young Cats lead by two points.

A switch in the Dublin attack which saw Ollie Gaffney move to full-forward brought an immediate dividend when Gaffney hit a goal and a point in a two minutes spell on 40 minutes.

Kilkenny struggled to break down the Dublin defence after that third goal.

Kilkenny kept up the pressure and might have scored a second goal on 57 minutes, but they had to be satisfied with a Rory Glynn point.

Tom McPhillips and Jeff Neary pointed to keep Kilkenny in touch, but Dublin were always able to respond and they did so with points from Ollie Gaffney (one a free) and Conor Brennan.

A late injury-time Kilkenny goal from a 20 metre free from Eoghan Lyng brought the margin back to a point, but straight from the puck out referee Gearoid McGrath blew the final whistle to the delight of the young Dubs.