Greyhound Racing- Kilkenny trainer in the final six with a chance to claim €80,000 first place prize 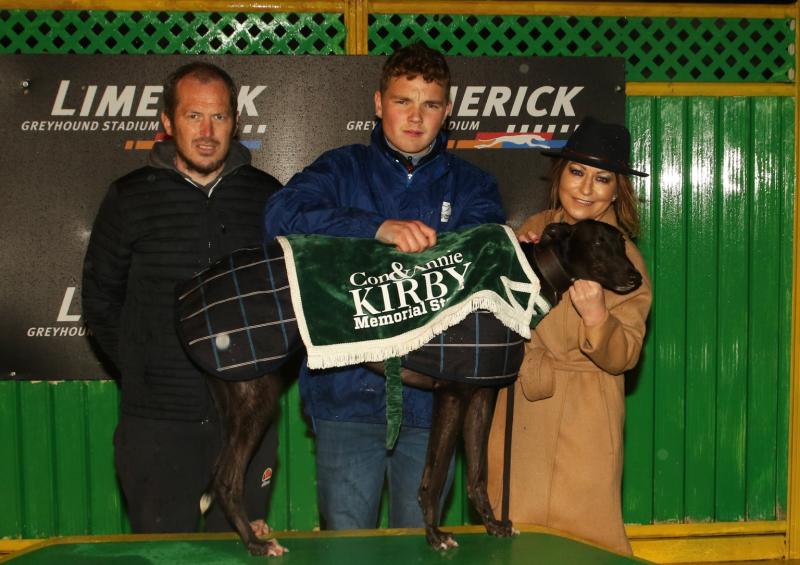 It was huge night at Limerick Greyhound Stadium on Saturday night as the semi-finals of the Con & Annie Kirby Memorial got underway and it was Kildare, who came into the Classic unraced that made everyone sit up and take note as he made it back-to-back wins to advance into the decider as a big player.

Trained in Mooncoin by Peter Cronin, The 6/1 outsider pinged the lids to lead the field into the opening corner. Meanwhile, last week’s star performer Magical Kuba also fluffed his lines, and he was forced to settle for fourth early doors, just behind Northern raider Da Bold Freddie.

Taking a two-length lead into the back straight, Kildare set a storming gallop down the far side as Swords Rex gave chase in second. It was some five lengths back to Da Bold Freddie in third, while both Magical Kuba and Deadly Showtime looked hung out to dry at this point in the contest.

A son of Droopys Sydney and Palermo, the winner still had a length and a half in hand crossing the winning line. The race for the final qualification spot was very close. Da Bold Freddie has occupied the position for much of the contest, but Magical Kuba began to turn the screw between the bottom two bends, and he got the verdict, by a head, on the line. The time for Kildare was a smashing 28.21 and it will be Swords Rex and Magical Kuba joining him in next week’s showpiece.

In the second semi-final, all eyes were on Ballinabola Ed after his powerful performance last weekend but it was Droopys Edison, a 4/1 chance, who landed the spoils for Kildare trainer Robert Gleeson in what proved a rather messy affair.

Upon entrance to the back straight, space was very much at a premium. Lenson On Ice continued to lead, however, both Droopys Edison and Ballinabola Ed were primed in behind and it was the latter who clipped his kennel companion in front, which in turn allowed Droopys Edison to gain a smooth passage up the inside and take control. Scooby Prince was another beneficiary of the traffic as Jennifer O’Donnell’s charge blazed around the outside of the luckless Lenson On Ice and Ballinabola Ed to pursue Droopys Edison into the penultimate turn.

Just a length between the leading pair rounding the bottom two bends, Droopys Edison and Scooby Prince quickly drew clear of the remaining runners, and it was the Robert Gleeson-trained son of Burgess Bucks and Droopys Blossom who was to stay on well and score by two lengths from Scooby Prince in second. The time for Droopys Edison, who is jointly owned by Paul Allen and Michael Dunphy, was 28.47.

It all got very messy in behind between the remainder of the field, but it was Ballinabola Ed who ensured Pat Buckley will have representation in the Kirby decider.

The draw for the final and nominated clubs: