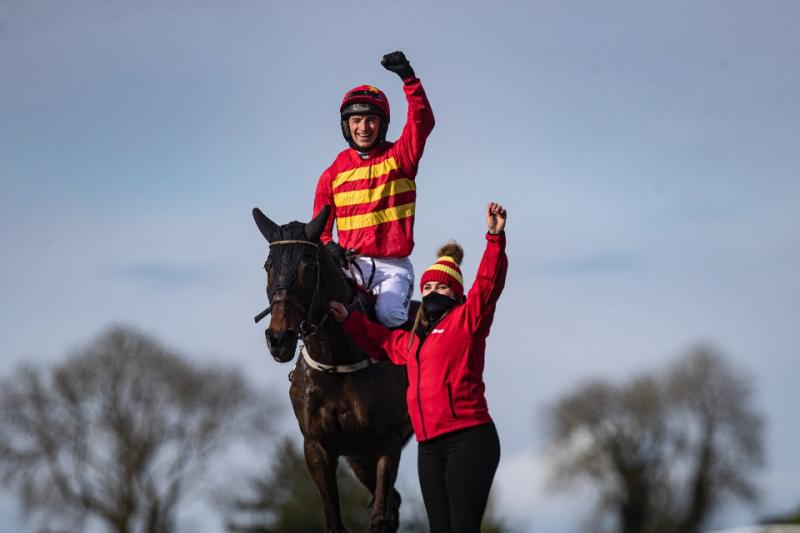 Patrick Mullins is assistant trainer to his father Willie and he goes through some of the yard's big chances at Punchestown.

Sir Gerhard
Sir Gerhard is very versatile, he can go for either the Bective Stud Champion Novice Hurdle or the Alanna Homes Novice Hurdle as he has won Grade 1s over both trips. I suppose it will be a case of what way you split our three up with Dysart Dynamo and State Man there as well. We’ll have to see closer to the time what way Willie will split them up but Sir Gerhard came out of Cheltenham very, very good. He jumped much better there and we don’t know what got into him at Leopardstown at the Dublin Racing Festival – maybe he was just feeling something on the day. I thought his performance at Cheltenham could be marked up hugely on account of how keen he was early on. I think he is very versatile and will be very difficult to beat over either trip.

Dysart Dynamo
For me Punchestown really plays to Dysart Dynamo’s strengths. He has won there twice. He gave me a horrendous time last year – it was like wrestling a bear around! I think hurdles helps him concentrate a little bit and it should definitely do after Cheltenham but I think Punchestown is a track that suits his strong running style.

State Man
I’d be very disappointed if he’s not a Grade 1 winner in the future. He showed plenty of speed to win the County Hurdle and it’s just about splitting up the novice hurdlers. There is a fantastic crop there going forward for next year.

Chacun Pour Soi
He walked into the third fence (in the Champion Chase at Cheltenham) and then got back jumping. While watching the race you would say I was going well, and I probably was, I wasn’t surprised that he put down. I just didn’t feel that he was giving me the feel that I was expecting him to. I don’t feel he was on his ‘A game’ on the day. I’m just disappointed as he shouldn’t be making mistakes like that. It wasn’t the Chacun Pour Soi we know but look, I thought the William Hill Champion Chase at Punchestown was one of the races of the season last year. I thought Paul was excellent on him the way he bounced him out and that was a huge performance the way he got Allaho out of his comfort zone completely. He is 10 now and Energumene is in his prime at eight, so it’s probably going to be difficult for Chacun Pour Soi but I’d be expecting him to be much more like his old self next week and perhaps he might just be a better ground horse. It’ll be a fantastic race and I wouldn’t rule him out.

Energumene
In reality, the Champion Chase at Cheltenham turned into a Grade 2 but Engergumene travelled through the race like the good horse he is. We’ll take it, a Champion Chase, we never had one before but we will have to take on Shiskin again and settle it once and for all.

Allaho
His options are limited. We didn’t go to Aintree as he put in a huge performance at Cheltenham and we thought asking him to come back that quick would be tough. When we probably have two good horses in the two mile race, the Ladbrokes Gold Cup over three miles at Punchestown would look the obvious race for him to go to. It’s not like he doesn’t stay three-miles, he ran Minella Indo very close over an extended 3m1f on better ground. He is just probably at his optimum over two and a half miles but he is still a very good horse over three miles. I do think he is a better horse going left handed as he does adjust to his left but I wouldn’t be surprised if he could win a Punchestown Gold Cup.

Al Boum Photo
He ran all right at Cheltenham. I think it turned into a bit of a sprint which obviously suited A Plus Tard and it didn’t suit our fella – not that it would have made any difference. I think he ran quite well and he ran really well (at Punchestown) last year when he was second to Clan Des Obeaux. I just wouldn’t forget about him, he hasn’t suddenly become a second-class horse. He is still a very, very good horse and if Allaho does run he’d be a very nice spare ride to pick up!

Facile Vega
All our good horses go to Punchestown so this has been the plan. The Champion Bumper at Punchestown is worth more than the Champion Bumper at Cheltenham so it would be madness not to go for it. He has come out of the race bucking and squealing and David Porter is very happy with him. Better ground shouldn’t inconvenience him and obviously his dam (Quevega) used to go from Cheltenham to Punchestown so hopefully it won’t be any problem for him.

St James’s Gate
He ran a fabulous race in third at Cheltenham. He only came into the yard at Christmas and Tornado Flyer is the last horse that fitted that type of profile so he could still be improving.

Klassical Dream
We got the good start in Leopardstown and (at Cheltenham) Klassical started backing up backwards and Paul ended up jumping off last and we are 10 lengths behind Flooring Porter straight away so was that just the swing. I was a little bit disappointed with how weakly he finished. He travelled up there very well but I don’t think that was him at his best and I’d be disappointed if he couldn’t win next week at Punchestown.

Vauban
I’d imagine he will go here. The good ground will help and he is a horse with a lot of speed. It turned into a bit of a sprint in the Triumph Hurdle and that probably played to his strengths but for him to be able to miss the last and be able to pick up and run away from the other two, I think he is better than your average Triumph Hurdle winner. Hopefully he can back that up but I can’t see any reason why the track or the ground wouldn’t play to his strengths.

Gaelic Warrior
The ground on the first day at Cheltenham was proper good ground, quicker than it would normally be there and the Fred Winter was very unusual in that they went very slowly. We got beaten by a Galileo horse, a flat bred, in a sprint on good ground. He started to jump right, maybe just feeling the ground a little bit as he is a big jumping type horse and I think he is better than the bare form and he was probably unlucky on the day with circumstances. Is he going to beat Vauban? Maybe not, but he’s definitely one going forward for next year that we are very excited about.