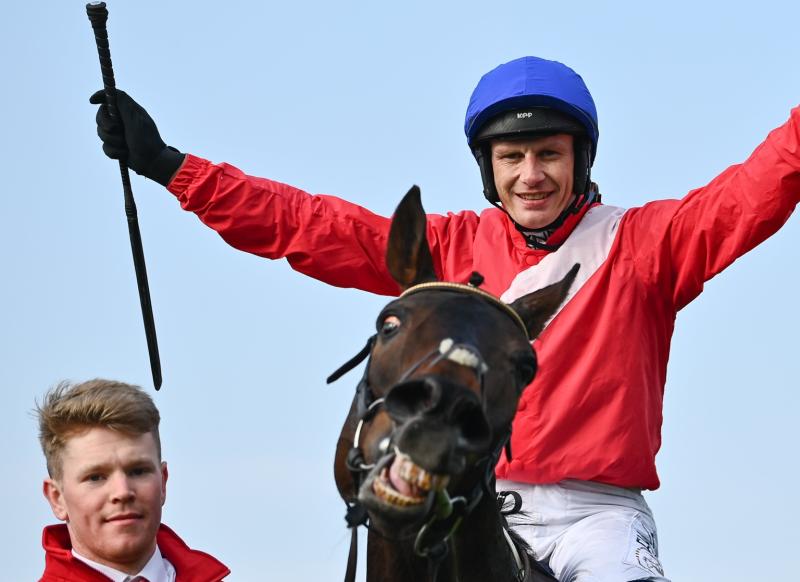 Allaho turned the feature Grade 1 Ladbrokes Gold Cup into a procession at Punchestown on Wednesday as the Willie Mullins-trained eight-year-old ran an elite field of rivals ragged under Paul Townend.

Cheveley Park Stud are globally renowned for their Flat breeding exploits but their famous red, white and blue colours are now carried by the two best staying chasers in the sport as Allaho joined the elite alongside the Henry de Bromhead-trained A Plus Tard who won the Cheltenham equivalent.

Last year’s Punchestown Gold Cup winner Clan Des Obeaux had to settle for the silver medal on this occasion with Al Boum Photo back in third.

Paul Townend was forced to choose not to ride Al Boum Photo for the first time since 2019 and he beamed afterwards: “He (Allaho) is a monster, isn't he?

"He wasn’t left at every fence. He was just correcting himself, which he has done before. I didn’t want to interfere with him galloping but at the same time I wasn’t gonna give him a root in the belly and set him alight three from home but fair play to Willie for rolling the dice and the owners. He’s obviously an older and stronger horse now.

“They were always going to test if he stayed or not but he can take horses out of their comfort zone.

“Any winner here, with the crowd back is brilliant. Punchestown is a massive festival and it’s even better when you’re riding for Willie Mullins.”

Willie Mullins, who was enjoying a Grade 1 brace on the day after The Nice Guy earlier, added: “I didn’t think Paul was going to be so bold on him and jump out to the front from the start but it worked.

“He didn’t take any prisoners. He told me he was going to jump out and I looked at him and he said, ‘Sure he’ll stay, won’t he?’ and I said, ‘Of course he will!’ As it turned out, Clan Des Obeaux was the only one able to stay with him.

“Bryan Cooper, who rode Al Boum Photo, said he’d never ridden in as fast a Gold Cup in his life. It was just end-to-end stuff, that was good to see.

“He just got beaten in Cheltenham as a novice over three miles and that day, I think he was up in front with something else taking him on. He’s a lot more mature now and he’ll stay, I think.

“I’ll have a word with Richard Thompson and Mrs (Patricia) Thompson. That opens a lot more options for him now anyhow. You could probably say King George, the way he jumps there.

“He’s just got a huge engine. I always hoped that he could do what he did there today. I was a bit worried that he could only put in that sort of performance over two and a half miles but now he’s able to do it over three, so it’s all good looking forward and he’s going to be more mature again next year. These three-mile chasers need plenty of time.”