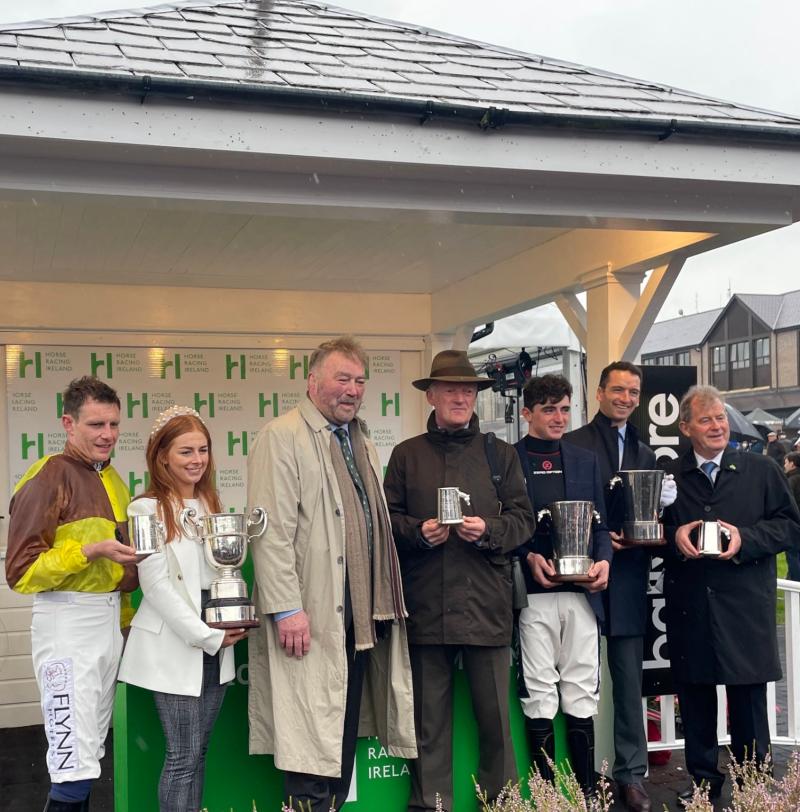 Willie Mullins capped off yet another memorable week at the Punchestown Festival with a 10th Grade 1 winner of the week in the Ballymore Champion Four Year Old Hurdle.

Vauban stamped his class on the juvenile division with an emphatic four-length success over Fil Dor, franking the form from the Cheltenham Festival to give Vauban a big Festival double.

Vauban was a 14th winner of the week for Mullins a ninth in Grade 1 company, while two more were in Grade A handicaps with the spread of winners carrying the colours of 12 different individual owners.

Reflecting on an incredible week, Mullins said: “I’ve got some very loyal owners and they’re very good. They’re able to provide the wherewithal to buy these horses if we can spot them. And then we have the likes of my wife Jackie, Patrick, Ruby (Walsh), David Casey – all the team. It’s not just one person, it’s the whole lot of them put together that make a huge difference.

“The rain is coming but they ride out in that sort of weather all the time. They don’t stop. They’re at home working away while we’re here interviewing and drinking champagne! We can’t forget them and I’m very lucky to have them all.
“I love the job. And like anyone it’s not a job when you’re enjoying it.”

Of Vauban, Mullins said: “He settled in and changed gear when he wanted to. There’s an automatic change of gear. He looks hugely exciting. He’s only learning to race. He’d only a few races on the flat and is getting it together over hurdles now.
“We bought him before he won (a Listed race in France). It’s a thing we never do but we bought him but they wanted to run him in a Listed race and we said okay and kept our fingers crossed.

“There was huge interest in him after that. The Australians wanted him, he looks ideal for down there and maybe he’ll end up down there some day. We might just have a tilt at the Melbourne Cup, not this year, maybe next year. You never know.
“He has a nice rating on the flat and I think there’s lot of room for improvement in that as well. And he’s shaping up to be a (Champion Hurdle horse).”

Paul Townend capped a fine season with a ninth winner of the week as he was crowned champion jockey for a fifth time.
The Cork native said: “At the start of the year I missed two months and then I missed another three in the middle of it. When I was coming back from the shoulder injury I didn’t think I’d be champion jockey, so this one is kind of special.”

He added: “It’s a big advantage (riding for Willie Mullins), that’s for sure. There’s so much racing on here and so much important racing this week, I can’t wait to go home to sit down and reflect on the whole season.

“We’d a brilliant Cheltenham. Winning Willie’s first Champion Chase was probably special, off the top of my head but there’s just been so many brilliant days and that’s because of the team I’m attached to.

“We all start from zero again after today so we’ll do it all over again, please God. It’s all about keeping the horses healthy and injury-free ourselves.”

Philip Hobbs added to the earlier victory for Nicky Henderson when Camprond finished strongly to claim the Tote Always SP Or Better Handicap Hurdle in the hands of Aidan Coleman, the British-based jockey having his first winner on home soil.

"I've been to Galway, Fairyhouse, Punchestown, for the last 12, 15 years, and I don't know what I am, 0 from 60 over here,” Coleman said. “I cannot ride a winner, loads of placed horses. Even Epatante earlier, I thought she'd be the one but that didn't work out so it's a monkey off the back. At 33, nearly 34 years old I thought I'd nearly all them gone so that's the last one now so I'm delighted.

Gavin Cromwell went on to complete a double on the card with 14/1 shot Path D’oroux made a winning debut on the racecourse under Derek O’Connor.

The Punchestown Festival concluded with the 31st running of the Have The Conversation – Say Yes To Organ Donation Punchestown Charity Race which went the way of Camilla Sharples on the Gordon Elliott-trained Amir Kabir, who held the Leona Hughes-ridden Barbados back in second. Sharples is a well known figure in Irish racing as Elliott’s traveling head lass, while Hughes is a member of the Marketing Executive at Punchestown Racecourse.