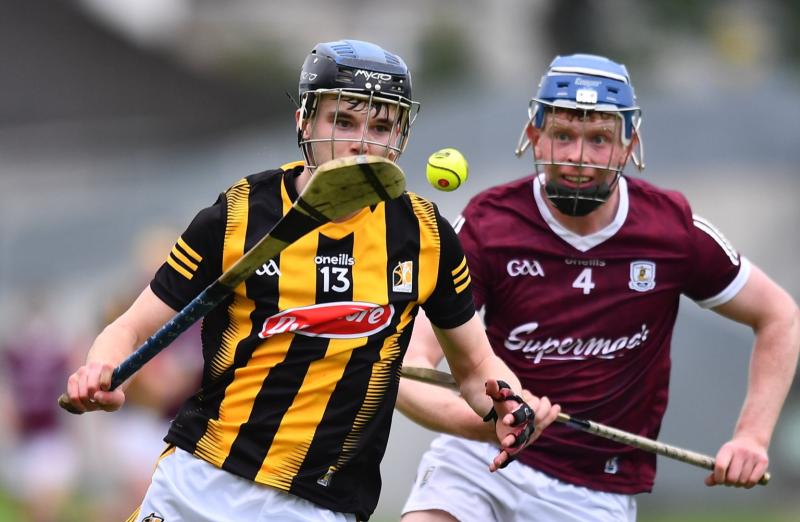 Billy Drennan of Kilkenny in action against Michael Walsh of Galway during the oneills.com Leinster GAA Hurling Under 20 Championship Semi-Final. Pic: Ben McShane/Sportsfile

Joe Fitzpatrick was the hero as his stoppage time winner gave Kilkenny a heartstopping victory over Galway in the Leinster Under 20 Hurling Championship semi-final in Tullamore.

Like in the senior clash a day previous, Galway looked the more likely winners for long periods but Kilkenny stuck in there and helped by an extra-time goal from Gearoid Dunne and 17 points from man of the match Billy Drennan they did enough to claim a thrilling win.

The two counties were facing off at the Leinster semi-final stage for a third successive year and it was the winners in the last two meetings, Galway that made the brighter start with Declan McLoughlin pointing after less than a minutes play.

Kilkenny quickly responded with a Billy Drennan free but they struggled throughout the opening quarter as their well structured style fell down against Galway’s pacy attack and by the 11th minute, Brian Hanley’s Galway team led 0-5 to 0-1.

Full forward Liam Collins was instrumental for the Tribesmen and he scored three points on the bounce before Diarmuid Hanniffy extended the lead to four.

Drennan then knocked over a free and a 65 to cancel out further Galway points from Alex Conaire and Declan McLoughlin.
That left Galway ahead on a 0-7 to 0-3 scoreline and although Collins continued to trouble the Cats with another brace, Kilkenny kept in touch with efforts from Joe Fitzpatrick, Billy Drennan and Harry Shine.

Galmoy man Drennan continued to eat into the Galway lead with his sixth point of the opening half but scores from Collins and Conaire meant the defending provincial champions led 0-11 to 0-8 at the change of ends.

Galway had a couple of great opportunities to put the game to bed at the start of the second half when they won two penalties but Collins was out of luck on both occasions as Kilkenny stopper Aidan Tallis produced a pair of great saves.

Those misses seem to give Kilkenny confidence and by the halfway mark of the second half they had edged their way in front when Harry Shine knocked over a point.

Shine ended up going off with a hamstring later a couple of minutes later and Galway appeared to be on course for victory as they rallied with a series of Liam Collins points.

Kilkenny still found a way to force the game into an extra 20 minutes though when Billy Drennan scored his only point from play.

Galway had a huge impact from their bench in the added on time as they notched 1-5 including a goal for Reuben Davitt as they led 1-24 to 0-23.

Kilkenny as they do never threw in the towel and after Gearoid Dunne struck for their only goal of the game, it looked as if the game would be decided by penalties but Fitzpatrick had other ideas.