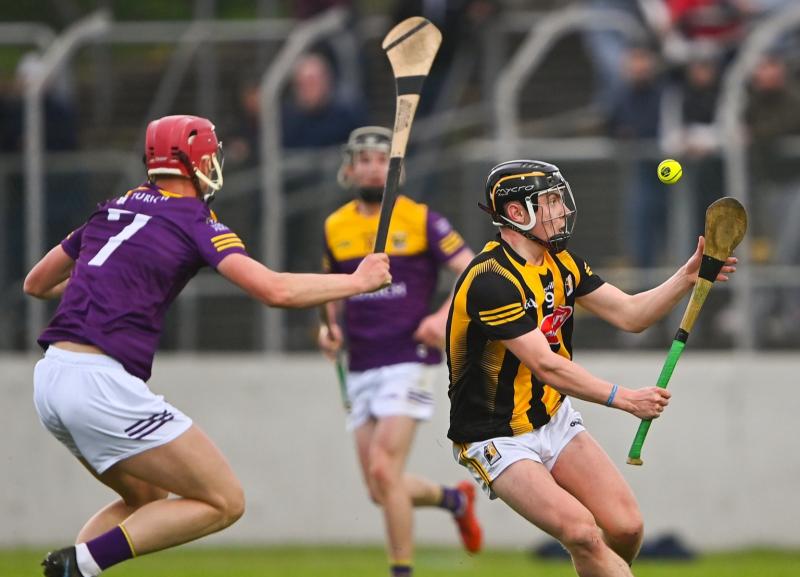 Denis Walsh of Kilkenny in action against Kyle Scallan of Wexford during the oneills.com Leinster GAA Hurling U20 Championship Final in Carlow. Pic: Piaras O'Midheach/Sportsfile

Despite being left hanging on in the four minutes of stoppage time, Kilkenny did enough to claim a one point victory in the O'Neills Leinster Under 20 Hurling Final against Wexford at Netwatch Cullen Park.

On a difficult night for hurling where both teams were guilty of numerous mistakes, it was Jack Doyle's 36th minute goal that helped Kilkenny over the line.

Doyle's goal gave the Cats a 1-9 to 0-5 lead with over 20 minutes remaining but from there to the finish, Wexford piled the pressure on their neighbours and it was Cian Byrne who led the fight with 10 points in total.

It was in the four added on minutes of stoppage time that Wexford looked most threatening with points from Cian Byrne and Thomas Kinsella reducing the gap to the bare minimum and Jack Redmond then had a glorious chance to equalise but to the delight of the Kilkenny supporters his late chance drifted wide.

Billy Drennan was again the main man in attack for Kilkenny with six frees while the likes of Padraig Lennon, Denis Walsh and Joe Fitzpatrick all had big showings.

Kilkenny will now advance to the All-Ireland Final where they will meet Limerick on the weekend after next.