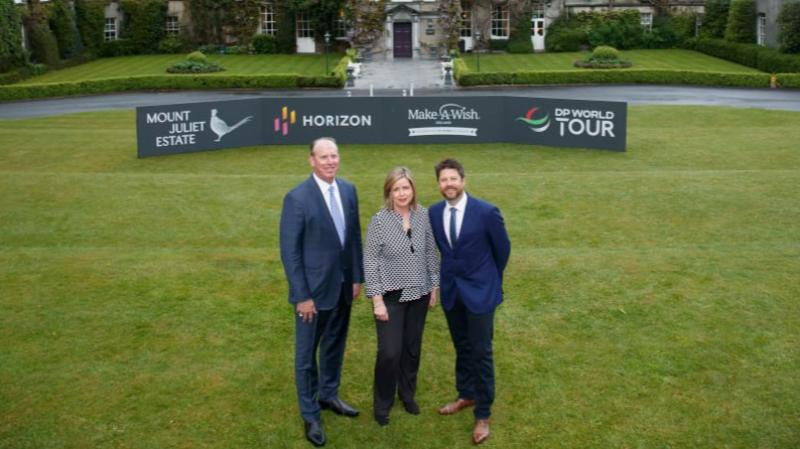 Make-A-Wish Ireland has been announced as the Official Charity of the Horizon Irish Open until 2027, with the tournament’s title sponsor Horizon Therapeutics committing to long-term support of the charity which brings hope, strength and happiness to children with life-threatening conditions through granting their wishes.

The deal will see an annual fundraising drive at each of the next six editions of the island of Ireland’s national open, with Horizon promising to provide a match to the donations raised on site at Mount Juliet Estate for Make-A-Wish Ireland – which celebrates 30 years of granting wishes in Ireland.

To launch the partnership, Horizon and the DP World Tour have extended an invite for Peter McEnery – whose dreams came true as a 14-year-old by playing alongside Pádraig Harrington at the 2010 Irish Open thanks to Make-A-Wish Ireland – to play once again in this year’s Pro-Am alongside his golf hero.

McEnery, who lives with Cystic Fibrosis, was 14 years old when his wish came true to play alongside the three-time Major winner at Killarney Golf Club 12 years ago, when he also received a once-in-a-lifetime VIP experience at the historic national open.

Now 26, McEnery is a four handicap golfer and credits his experience 12 years ago through Make-A-Wish Ireland as the primary reason for his continued love of the game. He will represent the charity at the Horizon Irish Open Pro-Am with the hope of raising awareness of its incredible work.

There will be multiple fundraising activations on site at the 2022 Horizon Irish Open, which takes place at Mount Juliet Estate from June 30 – July 3, including the Mega Putt Challenge in the Championship Village.

Fans will also be given the opportunity to donate when they purchase tickets for the tournament through the DP World Tour’s official ticketing website.

Mount Juliet last year hosted the island of Ireland’s national open for the first time since 1995 and for just the fourth time in the event’s history, with Australia’s Lucas Herbert triumphing in front of sell-out crowds at the County Kilkenny venue.

After that hugely successful hosting, the tournament returns to Mount Juliet this summer, with Sunday tickets already completely sold-out after unprecedented demand. Padraig Harrington will join his fellow countrymen Séamus Power and Shane Lowry in the field, with many more names to be announced in the coming weeks.