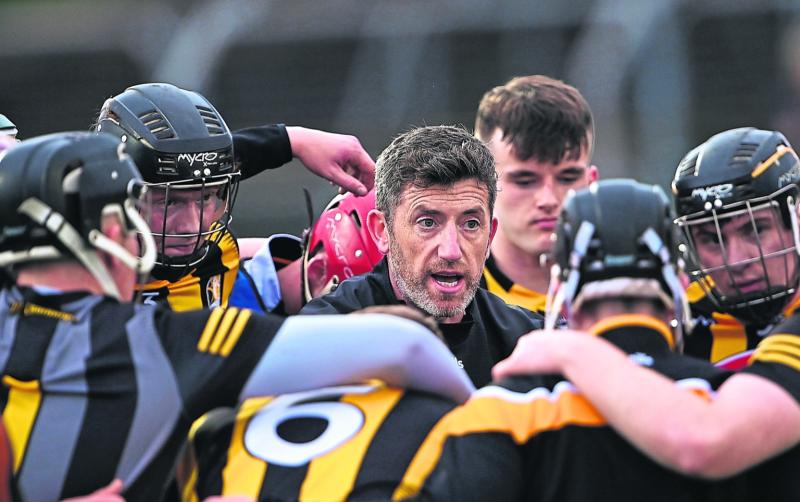 Kilkenny under-20 manager Derek Lyng has one last word with his players before the start of the Leinster final against Wexford in Carlow. Picture: Piaras Ó Mídheach/Sportsfile

After a tough couple of years at Under-20 level, Kilkenny are back as the Kings of Leinster but not without being pushed right to the wire.

Kilkenny boss Derek Lyng admits they were lucky to hold on for victory and he always knew the game would be very tight.

“The overall feeling is relief really, the game looked like it was going to go to extra-time with that late chance for Wexford but thankfully it went wide and I think we got out of jail to be fair.

“Wexford came on strong in the final ten minutes and we became a little nervy and when we went a couple of points ahead we kind of stopped hurling and in fairness to Wexford we knew that was going to happen.

“Kilkenny and Wexford games always go to the end and it was no different here.”

Jack Doyle’s second half goal was key to the Kilkenny victory but the Emeralds man knows the way they allowed Wexford back into the game wasn’t ideal and ahead of an All-Ireland final clash with Limerick on Sunday week, there is still much room for improvement.

“We were six or seven points clear after Jack Doyle’s goal and we looked like we were fairly comfortable at that stage and ready to kick on but we were never able to shrug off the Wexford challenge and in fairness to them they got a few scores and as soon as they got two or three on the board, they came in waves,” Lyng added

“We really struggled after that and the reality is that we have a lot of work to do ahead of the final but it’s a great place to be and we are just looking forward to it now.

“I believe in the players and while I know there is plenty to work on and lots of improving to do, tonight’s game was all about winning.

“We were playing in a Leinster final against our nearest neighbours Wexford and now we are just looking forward to getting ready for a massive challenge against Limerick and it’s just brilliant.”

The final will take place in Semple Stadium, Thurles on Sunday, May 22 with a 1.30pm throw-in and will form part of a double header with Cork and Tipperary in the Munster Hurling Championship.

It will give Kilkenny the chance to bridge a long gap to their last All-Ireland crown at this grade which arrived in 2008 when the Cats defeated Tipperary in Croke Park.

For now though, Lyng can take a bit of satisfaction at achieving a provincial title with the current crop.

“I’m very honoured to be the Kilkenny under-20 manager and when I took on the role I wanted to help out and develop players and the last couple of years didn’t go to plan and you are judged on performances or results so obviously when you do get the wins, of course there is a bit of satisfaction.

“Ultimately the lads that have played over the last couple of years will go on to have good careers and with it being a knockout championship you are judged on one game so it has been difficult but I’m really happy now for this crew as they showed tremendous character over the last two games and to see the result out in the end was a credit to them and hopefully we can drive on as we’ve less than two weeks to get ready for a final.”