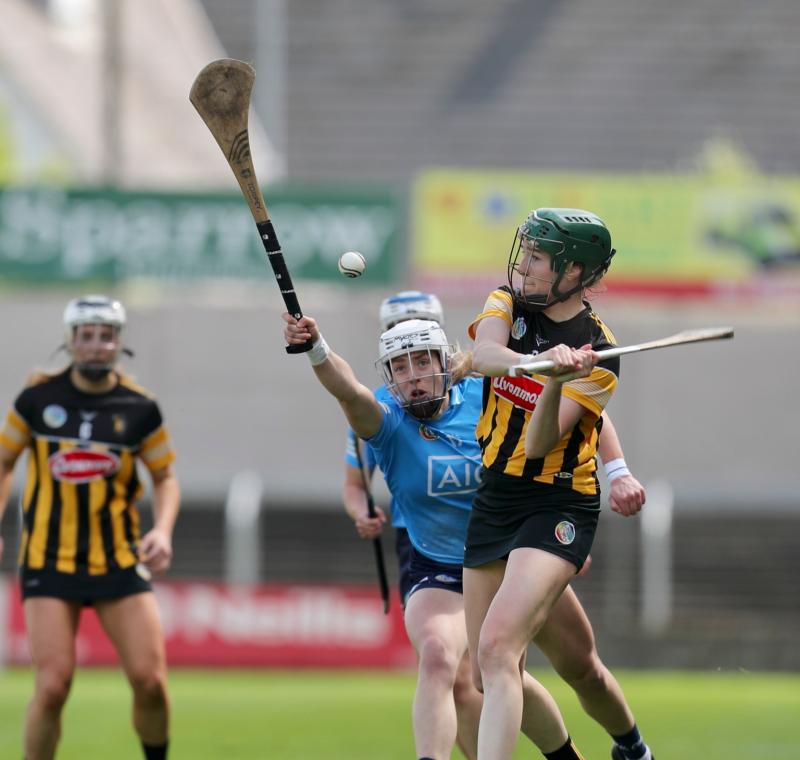 Kilkenny made it four Leinster titles in a row after an emphatic five goal victory over Dublin in MWH O’Moore Park Portlaoise.

Kilkenny are starting to get a ruthless streak to their play as they dispatched Dublin with ease on Saturday last as the stripey women travelled to Portlaoise to take on the Dubs in the Leinster senior final.

It was another piece of history for Leinster camogie as the game was part of a doubled header with the Leinster GAA hurling championship game Laois v Galway.

It was a glorious sunny day in the Midlands and Kilkenny got off to the perfect start when team captain Aoife Prendergast scored two points from play to leave Kilkenny 0-2 to 0-1 ahead after five minutes.

Aisling Maher levelled the scores by the sixth minute but then Kilkenny took over scoring 2-3 without reply.

Aoife Doyle and Miriam Walsh started the spree with points from play before Kilkenny opened the Dublin defence to get their first goal.

A long pass in from Denise Gaule saw Mary O’Connell latch onto the breaking ball before laying off a lovely timed handpass to Aoife Doyle who was running off the shoulder to rattle the Dublin net, the provider then turned scorer when Mary got herself a point from play soon after.

Kilkenny’s second goal came in the second quarter of the game, a long clearance from Claire Phelan went straight into the hand of Julieann Malone who’s shot was batted out by Eabha Mooney and Miriam Walsh was onto it like a flash before rounding the defender to slot home a poacher’s goal.

Katie Nolan and Mary O’Connell both added to the stripey women’s total before Dublin got two points with Niamh Gannon and Aisling O’Neill scoring from play to leave eight points between the teams by the 27th minute.

Kilkenny struck a sucker punch just before half time when Katie Power received a scooped pass from Denise Gaule and right on the half way line let rip looking to get a point where Mary O’Connell was waiting to pounce if the ball dropped short and while the goalkeeper and full back came to gather the ball, Power’s shot sailed right over them all to the back of the net.

It was a piece of fortune but it was a goal Kilkenny deserved for their dominance.

Aisling Maher then added a point from a free for Dublin to leave the half time score Kilkenny 3-7 Dublin 0-6.

Dublin needed a good start to the second half and they got that with a free from Aisling Maher within three minutes of the restart.
However Kilkenny then went on another scoring spree, Aoife Doyle started it off when she got Kilkenny’s 4th goal of the afternoon when a ball across the 20m line from Aoife Prendergast saw Miriam Walsh fight for possession where she won it and gave a pass to Niamh Deely and the James Stephens player was under pressure from three defenders but somehow managed to get a pass out to Aoife Doyle who again shot past Eabha Mooney.

Katie Nolan quickly followed up with a point before a sloppy puckout from Nolan’s score saw Katie Power pick up the loose ball and hand pass to Julieann Malone who shot over the crossbar.

40 seconds later and Kilkenny were in for their 5th goal, and it was Julieann Malone who started the move with a grubber pass along the ground into the forwards, Miriam Walsh then flicked the ball to Mary O’Connell who got the ball into her hand before returning the pass to Walsh who shot under Eabha Mooney’s legs to put Kilkenny in the driving seat and on the way to victory.

Dublin tried throughout the game to keep up with Kilkenny as it was 35 years since they were last in a Senior Leinster final and they didn’t want to take a massive beating from the Cats.

Niamh Gannon and Aisling O’Neill were instrumental through the game and really tried hard.

O’Neill got a point for the Dubs on 51 minutes before Gannon got her reward for her hard work with a point of her own.

The score of the game from a Kilkenny point of view then came on 53 minutes when Julieann Malone caught Aoife Norris’s puckout brilliantly and she passed the ball to Sarah Crowley who took a hit from Hannah Hegarty which left her on the ground and while three Dublin defenders came in to take the ball off her she was still able to strike the ball over the bar while on her knees.

Dublin then rallied for the last 10 minutes of the game and got three points on the board. Aisling O’Neill, Aoife Walsh and Gaby Couch all contributing on the day to leave the final score Kilkenny 5-11 Dublin 0-12.

It was an emphatic victory for Kilkenny ahead of their All-Ireland Championship opener against Down on Saturday.