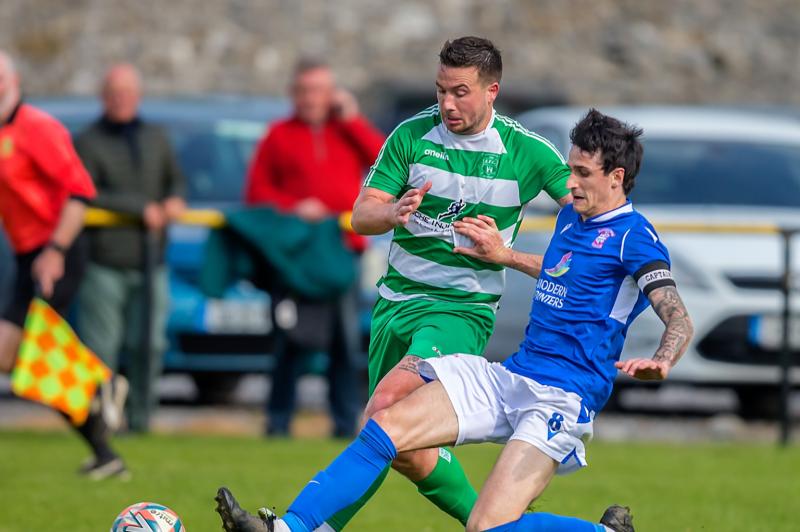 It was a busy Sunday of action in Derdimus with the two McCalmont Cup semi-finals taking place on a perfect afternoon for football.

The action got underway at 12 noon with Thomastown United meeting Castlewarren Celtic in the first of the last four ties.
Thomastown went into the game as strong favourites against their lower division opposition but Castlewarren proved very stubborn opponents and pushed Thomastown all the way.

Thomastown are looking to win their first McCalmont Cup title since 2016 and they looked like they would run away with Sunday’s first semi-final when Stephen Connolly put them in front inside the opening 10 minutes.

Castlewarren stayed in the fight though and troubled Thomastown on numerous occasions but crucially they were unable to find a way to break down their more fancied opponents and Thomastown held on to claim a much deserved 1-0 success and they will now have an opportunity to win a third cup title on Sunday week.

For any of the Thomastown management team that stayed on to watch the second semi-final between city rivals Evergreen and Freebooters, they were certainly treated to a cracking contest that doubled as a league fixture.

Both teams were fresh off defeats in National Cup competitions and their frustrations helped in providing the big crowd in attendance with great entertainment as Evergreen ran out 3-1 winners.

Evergreen were strong favourites but they did find themselves behind early on when Zach Bay Hammond gave Freebooters the lead.

Evergreen hit back in style with Mikey Drennan heading home an equaliser before half-time after he nipped in ahead of a couple of defenders to force the ball over the line.

Evergreen took that impetus and resolve into the second half with Niall Andrews and Mikey Drennan both adding to the league champions tally with late goals that eventually broke 'Booters resolve.

It all means Evergreen and Thomastown United will now reconvene at Derdimus for the McCalmont Cup final on Sunday, May 29 with a 3pm kickoff stated for Kilkenny’s showpiece game of the season.

Sunday’s meeting between Evergreen and Freebooters wasn’t the clubs’ only clash of the weekend with the city sides also meeting in the Under-19 Henderson Shield on Saturday evening.

The near neighbours shared five goals in total in a very attacking game but unlike a day later, it was Freebooters who emerged on top in a 3-2 victory.

Evergreen were the better team early on as they raced into a 2-0 advantage but they couldn’t hold off their defiant opponents for long and Freebooters battled back with goals from Zach Bay Hammond and Darren Lawlor giving them the victory.

Like the rest of the games last weekend it turned into something of a goalfest with Callan United edging the last eight tie as they overcame the Evergreen second string on a 4-3 scoreline on the Kells Road.

With Fort Rangers, Ormonde Villa and Freebooters B already securing their qualification it sets up the semi-finals for this weekend.

Fort Rangers and Callan United meet in Cuffesgrange at 6pm on Saturday night while 24 hours later it’s the clash of Ormonde Villa and Freebooters B in Garringreen at 11am.

St Canice’s and Lions met at the Waterbarracks in the Division Two Cup and they continued their fine form with a 3-0 victory that sets up a semi-final clash with Thomastown United B.

The other semi-final takes place this weekend when Castlewarren Celtic and Freshford Town meet at the Watershed.
The semi-finals in the Junior Division Three Jim Maher Memorial Cup proved to be high scoring affairs with Newpark B defeating Evergreen 46 (2-1) while Tullaroan got over Deen Celtic on a penalty shootout after originally drawing 3-3 after extra-time.

Newpark B and Tullaroan will meet in Derdimus for the final this Saturday evening at 6.30pm.

Other games of interest over the coming days include St Canice’s and St Pat’s FC in the LFA O’Neills Junior Plate as well as a pair of games in the Junior Mock Lawlor Premier Cup.