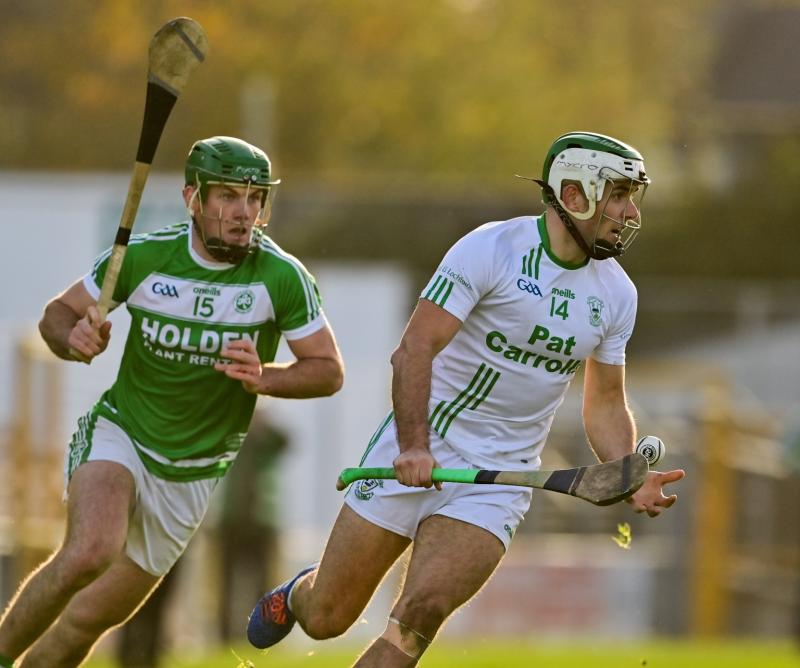 Paddy Deegan (Inset) chipped in with three points for O’Loughlin Gaels as they defeated Glenmore in the final round of the St Canices Credit Union senior hurling league in Thomastown on Sunday.

This was a game that featured some fine scores and tenacious defending from both teams.

There was a strong breeze towards the “town end” goal, which favoured Glenmore in the first half.

The opening exchanges were even, and the Loughlin’s defence coped well with Mikey Kirwans lengthy puckouts.

Mikey Butler was leading the O’ Loughlin’s full back line to great effect.

After 12 minutes the teams were level at four points each, the highlights being a point from Paddy Deegan close to the sideline, and a long-range point from Ian Byrne.

The game took off in the 19th minute, when Eoin Wall got through for the opening goal, following good work from Conor Kelly.

Ian Byrne responded immediately, taking possession on the 45-metre line, and getting through for a goal for Glenmore.

That left the teams level at 1-6 each.

The next few minutes were crucial to the outcome.

O’Loughlins were beginning to get on top, and Mikey Kirwan made a good save from Conor Kelly.

A quickly taken free by Glenmore was intercepted by Eoin Wall, and he was clinical in his finish, with a well taken goal.

Liam Hennessy scored a point just before the half time whistle, to leave O’Loughlins ahead, 3-8 to 1-8.

The first ten minutes of the second half were somewhat “stop start “in nature, with Ian Byrne and Mark Bergin each scoring two points.

Luke Hogan and Huw Lawlor each scored for O’Loughlins, to leave them 3-12 to 1-10 ahead.

However, like O’Loughlins in the first half, Glenmore did their best hurling when playing against the wind, and then stormed into the match.

In a 10 minute spell they scored eight points, including five by Ian Byrne, with Huw Lawlor scoring a long-range effort for Loughlin’s.

Huw and Glenmore’s Liam Hennessy were having a major battle, as were Luke Hogan and Eoin Murphy at the other end.

Just when it seemed the momentum was with Glenmore, Sean Bolger scored for O’Loughlins, and Mark Bergin and Paddy Deegan also showed their quality with two excellent points.

Glenmore went all out for a goal, Stephen Murphy saved well from both Charlie Phelan and Ger Aylward.

O’Loughlins showed their experience and quality at the right times and their defence was well marshalled by Mikey Butler and Huw Lawlor, with good support from Conor Heary. Eoin Wall had a major impact, scoring 2-3 from play.

Mark Bergin contributed some vital scores, as did Paddy Deegan, who was a real leader up front.

Glenmore will be satisfied with their second half performance, and will have learned a lot from the league campaign.