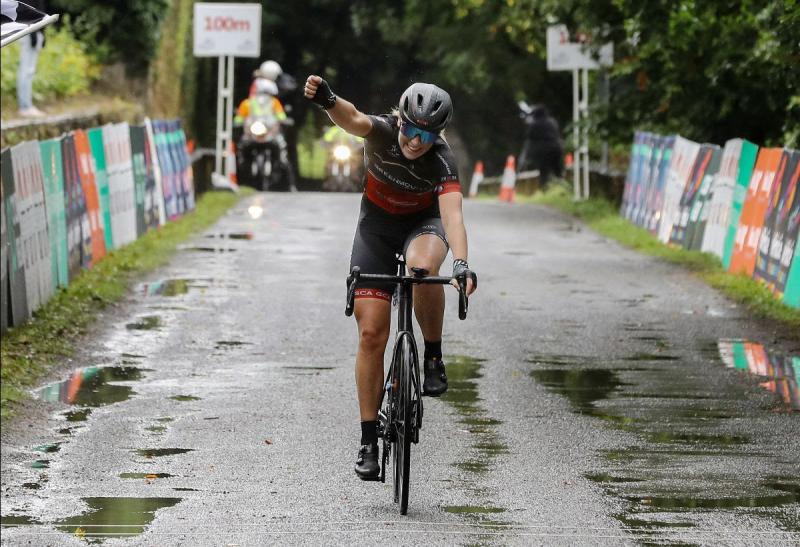 Lieke van Zeelst stormed to a superb solo victory in Woodstock Gardens on the second stage of Rá na mBan, holding off late challenges from Kate Richardson and Danni Shrosbree on the final climb from the picturesque Inistioge.

The Dutch rider broke clear of the main bunch with 18 kilometres remaining, just after the summit of the day's second Queen of the Mountains climb of Coppenagh.

Van Zeelst's fearless descending on fast, wet roads led to a gap that steadily grew to a maximum of 44 seconds by the time she reached the foot of the final ascent to Woodstock Gardens.

A late bid for glory by Alba Development Team's Richardson on the short, steep climb proved to be unsuccessful, with the Scottish rider crossing the line just 10 seconds down. Her second runners-up finish in two days was enough to secure the lead of the Sport Ireland Points Classification going into Stage Three.

Danni Shrosbree (Cams-Basso) also had a successful day, taking maximum points in the first two categorised climbs to extend her lead in the IVCA Wicklow 200 Queen of the Mountains classification, before leading the main bunch home for third on the stage.

The day started in damp conditions for the peloton as they rolled out from the Hoban Hotel in Kilkenny City,  and with three categorised climbs along the way, it was a race of attrition with a steadily dwindling group.

Less than 30 riders were left as a result of the strong pace being set by the Cams-Basso and Pro-Noctus - Rotor - Redchilli Bikes teams on the second climb, before Van Zeelst launched her winning move just after the crest of Coppenagh.

The reduced numbers in the bunch led to some hesitation in the chase of Van Zeelst, which allowed the gap to grow to what turned out to be an insurmountable lead.

The Greenmount CA guest rider held a strong pace on the final brutally steep Woodstock climb, ensuring she retained a lead of 12 seconds going into the flat final 1.4 kilometre run to the line.

Richardson attacked from the chasing bunch at the foot of Woodstock in a bid to bridge across to Van Zeelst, with the Scottish rider's effort falling short by just 10 seconds.

Stage One winner and overall leader heading into the second stage, Team Ireland's Lara Gillespie, fought valiantly to defend her lead but was unable to match the pace of the winner and came home 39 seconds down in 16th place.

The lead of the Best Irish Rider classification changed to Cycling Ulster's Amelia Tyler, after overnight leader Caoimhe O'Brien (Cycling Leinster) was hampered by an untimely puncture on the Coppenagh climb and wasn't able to regain contact with the main group.

Today's stage takes the peloton into County Laois for a tough day in the Slieve Bloom Mountains.

Starting in Portlaoise, the riders will wind their way through Abbeyleix, Mountrath and Mountmellick, before taking on the 8.6km long climb of Wolftrap. A fast descent is followed in quick succession by the 4.4km rise to the summit finish at The Cut.

The mountainous conclusion to the stage is sure to be decisive in shaping the battle for the overall race honours.