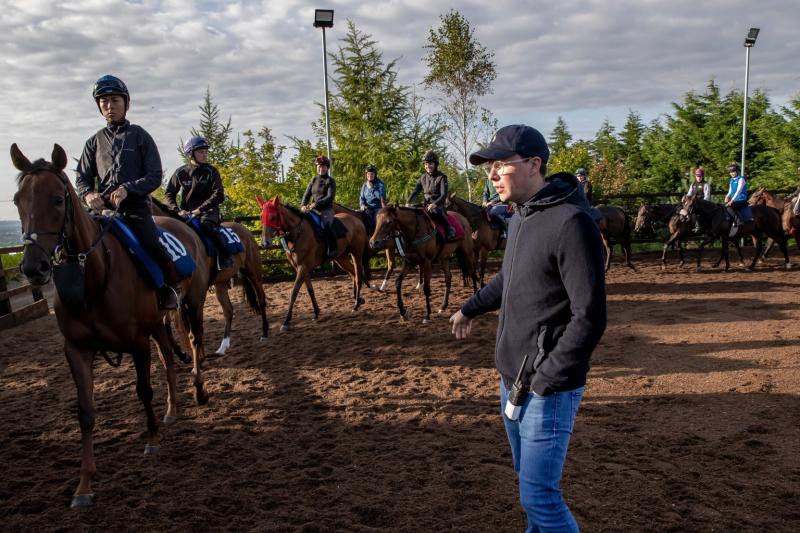 Joseph O’Brien with his string of horses

Joseph O’Brien has his yard in top order as he gears up for the Longines Irish Champions Weekend.

One of Ireland’s most prestigious Flat racing weekends, the Longines Irish Champions weekend sees two of Ireland’s premier racecourses join forces to stage the highest concentration of quality Flat racing in Ireland. Leopardstown will be the venue for Saturday’s racing, with action switching to The Curragh on Sunday.

Ahead of the Champions Weekend, we visited Carriganóg Racing, the home of Group 1-winning trainer Joseph O’Brien.
Racing history

Set in the picturesque location of Owning Hill near Piltown, Carriganóg Racing is based in a yard that is steeped in racing history.

Joseph’s grandfather Joe Crowley was the first to train from the yard on Owning Hill and enjoyed great success there. In later years, Joseph’s parents Annemarie and Aidan were both crowned Irish Champion National Hunt Trainers while based there.

Annemarie’s sister Frances also trained an abundance of winners from the yard. Thousands of winners have been trained on its famous uphill gallop over the decades. With substantial improvements and developments being made to the yard in recent years, it is now very much a world-class training facility.

O’Brien (29) now leads the yard of over 100 work riders and jockeys, giving a lot of employment to South Kilkenny.

Hannibal Braca last ran in the Dubai Duty Free Irish Derby (Group 1) over 1M 4F at The Curragh in July 2022, finishing seventh. The result was a little disappointing as he had previously won in The Curragh in May 2022 and in Salisbury in 2021.

Not forgetting coming third in his debut at Royal Ascot, in September 2021 as a two-year-old.

Speaking to Joseph, I enquired how his form is after he fell short in his last run at The Curragh’s Dubai Duty Free Irish Derby.

“He didn’t stay the mile and a half in The Curragh and the pace was very strong,” said O’Brien. “Even though he has an option of a mile and a half again, with a race in France there’s a mile and a quarter and he also has another listed option in Ireland that is over nine furlongs.

“It will be discussed with his owner where he runs,” he added. “He is a talented horse, and we think the best is yet to come with him.”

Speaking to Bloodstock Agent Michael Donohoe, he told us about his hopes for Hannibal Barca in the Longines Irish Champions weekend.

“We may wait until the weekend for a listed race back at The Curragh,” said Donohoe, “but he is a horse for next year and we expect a lot of improvement in 2023.”

All eyes will be on Joseph O’Brien this coming weekend. The young trainer has made such a name for himself, and has everyone wondering where he will be in 10 years’ time.
When I got the chance, I had to ask him what drives him. He responded with one word:

“Winners,” he said with a smile. “That’s what drives everyone in this game.”

In his book, ‘In Fact, an optimist’s guide to Ireland’, Mark Henry dedicated a chapter to Ireland’s world-leader status in horse racing.

He states that, for a small country, our expectations of sporting achievements on the world stage should be appropriately modest. We can occasionally claim top ranking success in rugby, golf, or athletics but Ireland can definitely claim to be consistently amongst the very best in the world when it comes to horse racing.

After Gaelic games, horse racing is the second most attending sport in the country but breeding horses, mainly Flat horses, is where Ireland truly excels. On average, one in the five of the world’s top flat racing horses are bred here, more than any other country. Hurling is often referred to as our national game but all the way through the 19th Century, everybody said horse racing was Ireland’s national sport.

Now in its ninth year, Longines Irish Champions Weekend boasts a strong programme of races, including six Group 1 races and the final Classic of the Irish Flat season.

With The Royal Bahrain Irish Champion Stakes and the Coolmore America Justify Matron Stakes leading the way at Leopardstown and the Comer Group International Irish St Leger, Al Basti Equiworld Dubai Flying Five and two of the best juvenile races of the year, the Goffs Vincent O’Brien National Stakes and the Moyglare Stud Stakes at the Curragh.

Longines Irish Champions Weekend will again attract many of the world’s best racehorses, owners, trainers and jockeys. It’s guaranteed to be one of the best sporting and social weekends of the year.

As well as top class racing, get ready for a fantastic line-up of live entertainment, great food, and fashion.

The Royal Bahrain Irish Champion Stakes, regularly ranked in the top Flat races in the world and the Coolmore America Justify Matron Stakes, has also been ranked as the world’s best fillies and mares’ race for the past number of years.