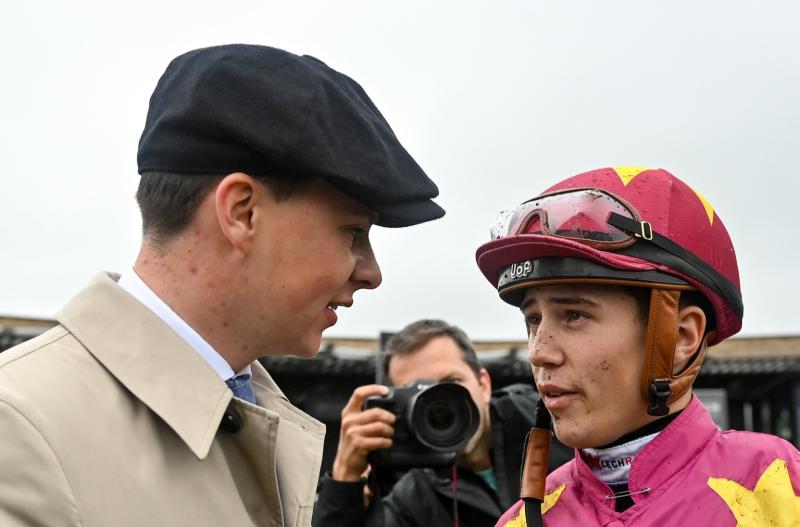 Kilkenny based trainer Joseph O’Brien completed a double on Day 2 of the Irish Champions Weekend at the Curragh  when Al Riffa showed his versatility to claim the Group 1 Goffs Vincent O’Brien National Stakes and give his young rider Dylan Browne McMonagle a first Group 1 win in the process.

Following the earlier win of stable companion Above The Curve in the Group 2 Moyglare Jewels Blandford Stakes under Moore, Al Riffa was rewarding connections who opted to supplement the son of Wootton Bassett for the €400,000 colts’ contest.

Al Riffa was a course and distance winner on good ground that good to firm in places ground last month but wasn’t in anyway inconvenienced by the rain-sodden going at HQ yesterday as he stayed on strongly in the final 100 yards to beat the Donnacha O’Brien-trained Proud And Regal by a length and a quarter.

O’Brien said of his smart juvenile: “It was a good performance and he got through the ground well. It was a very capable performance.

“We’ll see how he comes out of it today. He’s a big frame of a horse. We’ll discuss it with the owners and see where we go from there.

“We thought if he ran in the first three it would set him up for the race on Arc day. To see him come onto the bridle at the two pole was special.

“Dylan has been riding very well for the last number of years now. He won on this horse (in his maiden) and he was entitled to keep the ride on him. I thought he gave him a marvellous, confident ride and he’s a big future.”

Browne McMonagle paid tribute to those who helped him reach the milestone.

“It’s hard to believe,” said Browne McMonagle. “Hopefully it’s the first of many… it’s down to Joseph. It’s only the horse’s third run, all his runs have come at The Curragh.

“Massive thanks to everyone behind the scenes at home. We’ve a great yard, Faz, Mark, Tara, everyone in the yard does a great job. And my family as well, I wouldn’t be here without them, all the groundwork, and everyone at the pony racing circuit that helped me get to this level, it wouldn’t be possible. Mum and Dad and everyone’s here today so it’s great.

“It means a lot. You couldn’t have done it on a bigger stage and it’s great to get one.”