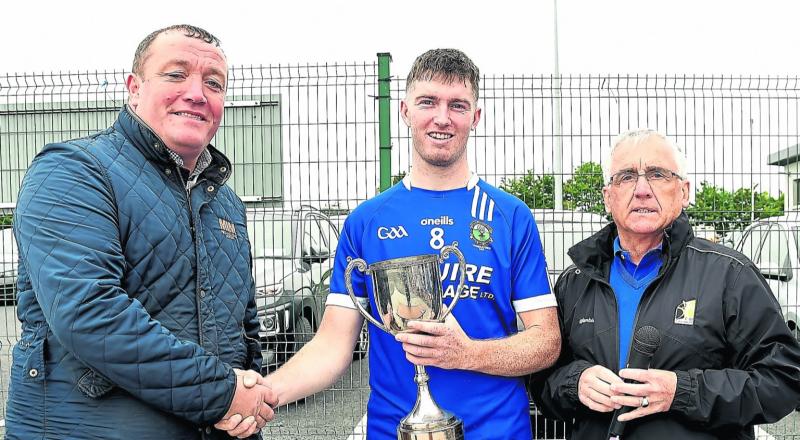 Was it an inspired substitution or a stroke of good luck?

Either way, the introduction of Jonjo Farrell helped Thomastown turn the tables on Danesfort and rally to the intermediate league title.

The captain made his presence felt, pouncing for a 44th minute goal that saw the Grennan men get their noses in front - and stay there - at an immaculately presented John Locke Park.

Sprang from the bench with 40 minutes on the clock, Farrell’s first involvement was to win a free which Robbie Donnelly converted. His next move was even better, timing his run to reach the edge of the square as Stephen Donnelly lofted a pass into his path before slamming the sliotar to the scoreboard end net.

The goal saw Thomastown jump from level terms to three points ahead (1-18 to 1-15). Their biggest lead of the game, it was an advantage they would not lose.

The goal had a devastating effect on Danesfort, who came into the fray with a 100% league record. While championship silver is their ultimate goal they cut a neat dash in this league final, testing Thomastown with a fluid forward line which roamed with a purpose.

With both sides peppering points from the off the game quickly took on a feeling of a see-saw tussle, as the teams battled for the upper hand. Philly Cooney and Richie Hogan (2) gave the ’Fort an early edge but it didn’t take long for a John Donnelly-inspired ’Town to reply as they moved two clear inside eight minutes (0-5 to 0-3).

Back came Danesfort. Hogan (0-2, one free) and Ben Whitty rattled off three in quick succession to fashion a slender lead, but two evenly-matched sides were level by the end of the first quarter as Stephen and Robbie Donnelly led the Grennan response.

Danesfort were causing problems with their forward ranks, moving players out and around to keep a steady flow of possession going. Both sides seemed content to pick off points - the only threat of goal was snuffed out when corner-back Peter Connellan dived to divert a probing low ball away from the grasp of the marauding Robbie Walsh on 24 minutes before he could pick it up - but there was time for one real chance which Danesfort made sure to take.

With the game ticking into injury-time Thomastown had crept ahead thanks to midfielder Brian Staunton’s point from distance (0-13 to 0-12). However, just as they began to think of the interval they were overtaken, Robbie Walsh doing well to pick up Cathal Kearney’s stoppage time layoff before firing a shot across Diarmuid Galway and inside the ’keeper’s right hand post. It was a swift and decisive strike, handing Danesfort the impetus at the break (1-12 to 0-13).

If there was a positive to come from conceding a goal for Thomastown, it was that it came right on half-time. Clearing their heads over the interval they regrouped and, with John (0-3) and Robbie Donnelly (two frees) leading the way they were all square by the 44th minute, their flurry of scores cancelling out three Danesfort points which included a mammoth effort from Paul Murphy (0-18 to 1-15).

’Town were getting the upper hand though, and once Jonjo Farrell hit the net they never let their rivals get a look-in. Robbie Donnelly added to their lead with a 65, but only after Paddy Hogan had denied Thomastown another goal with a magnificent save, his full-stretch dive turning sub Aaron Kehoe’s 45th minute shot around the post.

The Farrell goal had a devastating effect on Danesfort’s attack. They were forced out of the game, adding just three points to their tally in the final quarter. Thomastown eased up on the offensive front themselves, but Luke Connellan pounced to swat a loose sliotar home in the dying seconds of normal time to seal their comeback victory.